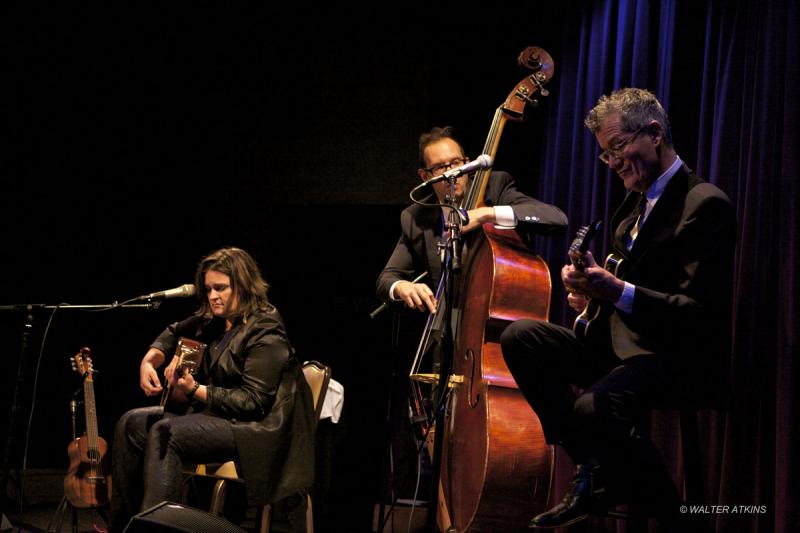 By Walter Atkins
November 4, 2015
Sign in to view read count

Madeleine Peyroux flew into the comfortable confines of Yoshi's Oakland for a two-day mid week stand. On this Tuesday evening, she featured hit songs from her first anthology album Keep Me in Your Heart for a While: The Best of Madeleine Peyroux (Rounder, 2014). The opening night's second set showcased her personalized blend of blues, jazz and country. Her trio included veterans Jon Herington and Barak Mori on electric guitar and double bass respectively.

Peyroux started the nightcap session with Hank Williams' "Take These Chains" followed by Elliot Smith's "Between The Bars." Her nuanced vocal style gave weight to all the songs she presented and had a pleasant manner of engaging both the house and her band.

Tom Waits' bluesy "Tango Till They're Sore" featured Mori on bass. The following selection was "Guilty" with commentary from the singer. Peyroux said "we are guilty" and said further, "Love songs, blues, dark songs... this one has all three by Randy Newman." She mentioned the tune talked about "some cocaine from a friend" and it also included "some alcohol from a bartender." The Burke/Leslie composition "Fun Out Of Life" was done with an upbeat pace while Peyroux sang and played the guitar.

Next up was her Billie Holiday flavored original "Don't Wait Too Long." The massive 2004 hit from her second album Careless Love (Rounder) was written by Peyroux, Jesse Harris and Larry Klein. Before starting, Peyroux mentioned George Bush and when asked which one, the singer promptly replied, "The worst one." She rhetorically asked, "Are we in Northern California?" She described two lost guys and how it seemed like a political problem. She added, "You can cry but don't wait too long." Herington's expressive guitar work complimented her solid vocals.

Peyroux sang a few songs while the band took a break backstage. On "Easy Go Blues" she played her guitar. She then shared her New Year's resolution, "to be more cheerful." Referring to "Highway Kind," she said "It ends with blues, but that don't make it sad."

On "Garbage Man," the vocalist said it was, "A good idea to have a love song that hits an apex." She continued, "When I was little, I used to love the Oakland Raiders" and added, seductively, "Help bring me from all this mess, sweet garbage man."

The band members returned to the stage and she asked, "What did I miss?." They replied, "The game. The Royals won." Peyroux responded, "This is for the Mets. They got far enough for me" and then went into "Got You On My Mind." Peyroux sang in her heartfelt and subtle tone, and played acoustic guitar. Herington played with a clear fluid style that encompassed blues, jazz, and country with the ease of Chet Atkins. The guitarist also shared some vocal work.

She said, "For this new century, we need more time then played "More Tme." She sang the next song in French. "J'ai Deux Amours" (I Have Two Loves). It was "OK to sing love songs in the French language" and the following tune was in Portuguese. It was her interpretation of Antonio Carlos Jobim's bossa nova standard "Aqua de Beber" (Drinking Water). Peyroux proclaimed, "Love is water and I'm dying of thirst" and this was one of her "favorite metaphors." She did the chorus with Herington while playing acoustic guitar, and the crowd loved it.

Peyroux's passionate cover of Leonard Cohen's romantic "Dance Me To The End Of Love" was a cheerful love song immediately recognized by her supporters with the opening notes. After finishing the popular song, Peyroux said she felt a "little jetlagged."

For the encore, Peyroux played Herington's arrangement of Warren Zevon's "Keep Me In Your Heart," the title track from her 2014 retrospective. The plaintive song included a bass solo and garnered a loud response. Zevon's song appeared on The Wind (Artemis Records 2003), his last album released just weeks before death from inoperable cancer. The CD earned two posthumous Grammys for the sardonic rocker including 2004 Best Contemporary Folk Album.

Peyroux then asked a band member to call the next encore. He selected "Careless Love," the title track from her second solo disc. She mentioned hearing the folk singer Odetta perform the song. Peyroux called it an "early birth control contraceptive kind of song." During the tune, she had a little fun with Mori when the bassist started his vocalese. As he sang, she looked at him with an expression of mock disdain. She closed the entertaining evening with an ardent version of "This Is Heaven To Me."

Madeleine Peyroux interpreted a richly diverse collection of compositions with her distinctive voice and competent band. She sent the weeknight attendees home with smiles and vivid images.