By Karl Ackermann
November 4, 2015
Sign in to view read count 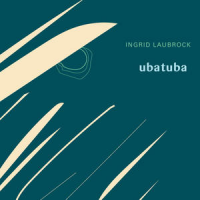 It's hard to believe that German born saxophonist and composer Ingrid Laubrock has been recording since the late 1990s, perhaps because there is a distinct newness to every project she releases. Although she trained with Jean Toussaint in London for a short time and later with Dave Liebman, Laubrock is very much a self-made artist with a style that is plainly her own. She came to wider recognition with her self-titled Sleepthief trio debut (Intakt, 2008) and more so with Paradoxical Frog (Clean Feed, 2010), a trio that included pianist Kris Davis and drummer Tyshawn Sorey. As Laubrock has moved further toward the avant-garde and free improvisation, her star has continued to rise.

Ubatuba (also the name of the quintet) features a powerhouse quintet that includes Tim Berne. He and Laubrock both play alto here while the leader doubles on tenor. The eclectic Dan Peck, on tuba, has a resume that includes work with trumpeter Nate Wooley, saxophonist Tony Malaby and Anthony Braxton. Trombonist and visual artist Ben Gerstein has worked with Henry Threadgill as well as Kris Davis and Sorey. Laubrock's long-time colleague and spouse Tom Rainey is on drums. The inexhaustible Rainey has appeared on more than eighty recordings, working extensively with Berne and recording several albums as a leader.

In her liner notes, Laubrock explains that her compositional method on Ubatuba was to create a polyphonic, melodic and organic experience, juggling the mass and area, structure and free space and she has more than succeeded in that daunting task. The ten-minute "Any Breathing Organism" is initially a powerful murmur of low brass until Laubrock briefly rolls a jolt of adrenalin into the piece and then allows it to resettle. On "Homo Diluvii," Laubrock finds another gear. Rainey intricately introduces the piece and the brass and reeds slowly and dramatically build to a feverish improvisation.

"Hiccups" incorporates bits of melody into an otherwise unstructured and tentative performance. At thirteen minutes, the piece has plenty of time for stratifying improvisations and the musicians take full advantage without playing over each other. Similarly, "Hall of Mirrors" and "Any Many" are amalgams of unforgiving boundary-pushing and darkly mysterious passages. At almost sixteen minutes, "Hypnic Jerk" closes the album like a self-contained suite. It moves from an agitated state to a resonant and ominous atmosphere that Rainey eventually guides back and forth to its dramatic conclusion.

Ubatuba is an ambitious creation in terms of Laubrock's astoundingly complex writing and in the masterful musicianship from all involved. The combination of low brass and thorny, snaking saxophone lines are clearly and extraordinarily steered by Rainey. It all makes for a powerful impression and brings Laubrock's organic creation to life on this very unique album.

Any Breathing Organism; Homo Diluvii; Hiccups; Hall of Mirrors; Any Many; Hypnic Jerk.