Norman Connors: Love From The Sun 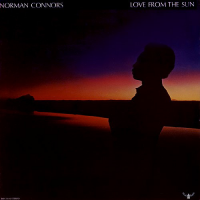 Love From The Sun is the last unalloyed jazz album recorded by drummer, composer and bandleader Norman Connors under his own name, before he changed course towards R&B and then descended—yes, let us embrace a judgemental moment—into the quagmires of disco and smooth jazz. In autumn 1973, when this album was recorded, Connors, who had made his recording debut on Archie Shepp's The Magic Of Ju-Ju on Impulse! in 1967, had just come off two straight years as a member of Sam Rivers and Pharoah Sanders's bands. He was acoustic-jazz royalty. There are suggestions of Connors's imminent new direction in the lineup he assembled for Love From The Sun. Several of the players—notably Herbie Hancock, Eddie Henderson and Dee Dee Bridgewater—were already leading lights of fusion. But in 1973, fusion had yet to become a dirty word, other than among straight-ahead diehards who refused to accept electric basses and keyboards and who regarded Miles Davis's masterpieces In A Silent Way (CBS, 1969) and Bitches Brew (CBS, 1970), and their immediate follow-ups, as anti-jazz monstrosities. Connors's Love From The Sun band was made up, in any case, of musicians with credentials as impeccable as his own. They approached fusion with experimentalist attitudes, consciously seeking to push the boundaries of jazz, while also seeking to expand its audience (in itself no sin, but not without dangers, as the future would demonstrate). Henderson had been a founder member of Hancock's pre-Headhunters band, Mwandishi, and, under his own name, would shortly record two outstanding fusion albums for Blue Note, Sunburst (1975) and Heritage (1976), both produced by Skip Drinkwater, the producer of Love From The Sun. Bill Summers was a founder member of Headhunters. Alongside their ongoing work with Miles Davis, Gary Bartz and Carlos Garnett had recorded the early spiritual-jazz masterpiece Alkebu-Lan: Land Of The Blacks (Strata-East, 1972) as members of James Mtume's Umoja Ensemble. Bridgewater was a member of the band which would record Billy Parker's politically engaged Freedom Of Speech (Strata-East, 1975), previously reviewed here. These musicians all shine brightly on Love From The Sun. Highlights include Bridgewater's gorgeous vocals on the title track, Hancock's ferocious solo and the turbocharged drums and percussion which are features of "Kumakucha," and Bridgewater's vocals and Garnett's solo, both on-fire performances, on "Holy Waters." And there is plenty more to get your ears round on these and the other three tracks. A collector's item for decades, Love From The Sun is now back amongst us on this vinyl-only edition from British audiophile label Pure Pleasure.

Side One: Revelation; Carlos 11; Drums Around The World. Side Two: Love From The Sun; Kumakucha (The Sun Has Risen); Holy Water.