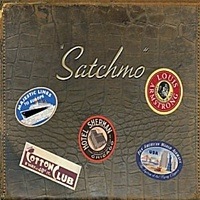 "You can't play anything on a horn that Louis hasn't played," trumpeter Miles Davis said. And while pianist Jelly Roll Morton may have claimed to have invented jazz, if any one artist could be said to have done that, it would be trumpeter and singer Louis Armstrong.

No one artist invented jazz, of course, but Armstrong's importance in its early development is supreme, and four decades after his passing, he continues to delight. Even during his infrequent below-par periods, he was only treading water; practically everything he recorded is worth listening to. So box set compilers have an easy job, one requiring no more than a pin and a list of available tracks. Satchmo: Ambassador Of Jazz, however, has been put together with a sense of history and it includes a representative selection of highlights from Armstrong's career, throwing in a few obscurities along the way.

The four-disc, 81-track set is a slimmed down version of the ten-disc, 186-track set released by Universal under the same title in 2011. The bigger box included seven CDs compiled from Armstrong's commercially released recordings from 1923-1967; an eighth CD of previously unreleased or rare session material; a ninth from a 1956 performance at the Hollywood Bowl; and a tenth comprising a 1965 interview Armstrong gave to Dan Morgenstern. The four-disc set samples all this material with the exception of the 1965 interview.

The collection includes at least one track from most of Armstrong's significant studio sessions; from his early work with cornetist King Oliver's Creole Jazz Band and Fletcher Henderson's orchestra; through his ground-breaking Hot Fives and Hot Sevens; with Sy Oliver's and Russell Garcia's orchestras; with the small groups featured on the albums made with singer Ella Fitzgerald, and with pianist Oscar Peterson; and with the various orchestras, studio bands and All Stars Armstrong fronted until shortly before his death in 1971.

As the years rolled by, and his lip problems got worse, vocals became increasingly central to Armstrong's work. Some pooh-pooh his singing as showbizzy and inconsequential; others find it as uplifting as his trumpet playing. If you are in the second group, you will find many glorious Armstrong vocal tracks here. The only quibble, and it is a small one, is the number of tracks on which Armstrong duets with Fitzgerald; nine is overdoing it given the capacity of a career-long, four-disc set.

Like with the bigger box, the discs are packaged in a replica of one of Armstrong's travel cases, which includes a 164-page, hardbound book. The book was assembled from previously published biographical material and offers no new insights. Its value comes from the illustrations: photos, gig fliers, sheet music, album covers and other miscellaneous ephemera. Travel case and book are made from heavy gauge card and the book is printed on art paper. It is a quality production let down only by the book's underwhelming text, which also suffers from sloppy copy editing.

Inevitably, some listeners questioned the choice of tracks on the ten-disc set, and there are likely to be more mutterings about the slimmed down version. But, actually, the collection is well-balanced between the familiar and the not so well known, with some choice rarities and a good proportion of live recordings. The less familiar material includes a 1949 recording with singer Billie Holiday ("You Can't Lose A Broken Heart"), and a 10:31 performance of "St Louis Blues" recorded in 1956 with the New York Philharmonic Orchestra conducted by Leonard Bernstein. Throughout, Russ Titelman's remastering is state of the art.

The bottom line, as usual, is price. There are more comprehensive Armstrong sets around, of which Mosaic's seven-disc, complete Decca recordings from 1935-1946 is particularly valuable. But the slimmed down Satchmo: Ambassador Of Jazz is one of the more attractively packaged and it is also one of the least expensive.

After enjoying the four discs, however, all but casual Armstrong fans will likely be left wanting the ten-disc version. It is a cruel world—but as Armstrong reminds us on the last track of this collection, it can be a wonderful one, too.

Tracks: CD1: Stomp Off, Let's Go 1923—1938: Just Gone; Chimes Blues; Shanghai Shuffle; Copenhagen; St Louis Blues; Gut Bucket Blues; Heebie Jeebies; Cornet Chop Suey; Muskrat Ramble; New Orleans Soup; Potato Head Blues; West End Blues; Mahogany Hall Stomp; Blue Yodel No. 9; Chinatown My Chinatown; I'm In the Mood For Love; Old Man; Ev'ntide; Swing That Music; The Skeleton Is In The Closet; On A Coconut Island; Old Folks At Home (Swanee River); Jubiliee; Struttin' With Some Barbecue; When The Saints Go Marching In. CD2: C'est Si Bon 1938-1951: Nobody Knows The Trouble I've Seen; Jeepers Creepers; Perdido Street Blues; I Cover The Waterfront; When It's Sleepy Time Down South; You Won't Be Satisfied (Until You Break My Heart); Do You Know What It Means To Miss New Orleans?; Back O' Town Blues; Rockin' Chair; Mukrat Ramble Parts 1 and 2; That's My Desire; That Lucky Old Sun (Just Rolls Round Heaven All Day); Blueberry Hill; You Can't Lose A Broken Heart; C'est Si Bon (It's So Good); La Vie En Rose; Dream A Little Dream Of Me; Baby It's Cold Outside; Gone Fishin'; A Kiss To Build A Dream On. CD3: Satchmo 1955-1957: Rockin' Chair; Blue Turning Grey Over You; Mm-Mm; St Louis Blues (Concerto Grosso); Ole Miss Blues; Bucket's Got A Hole In It; Mack The Knife; Stars Fell On Alabama; They Can't Take That Away From Me; Moonlight In Vermont; On The Sunnyside Of The Street; When You're Smiling (The Whole World Smiles With You); King Of The Zulus; Stompin' At The Savoy; Our Love Is Here To Stay. CD4: What A Wonderful World 1957-1967: I Get A Kick Out Of You; Stormy Weather; Body And Soul; Nobody Knows The Trouble I've Seen; I've Got The World On A String; Summertime; Bess Oh Where Is My Bess; Indiana There's No You; Let's Fall In Love; Sometimes I Feel Like A Motherless Child; Hello, Dolly!; A Lot Of Livin' To Do; I Still Get Jealous; Blueberry Hill; Moon River; So Long Dearie; Pretty Little Missy; Cabaret; Mame; What A Wonderful World.