The Charles Gayle Trio: Look Up 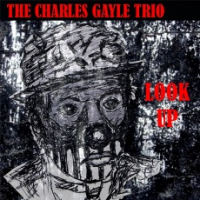 Fire-breathing saxophonist Charles Gayle has had to wait a long time for his ESP-disk debut. Allegedly, there was a 1974 session in the can, but the label folded in its earlier incarnation, before it saw the light of day. But now, a 1994 live date from Santa Monica has been issued on the revived imprint. Recorded during the spell that saw issue of such titles as Consecration (Black Saint, 1993), Kingdom Come (Knitting Factory Works, 1994) and Testaments (Knitting Factory Works, 1995), Look Up sits firmly within the reedman's high-octane period.

At this time, Gayle was the epitome of uncompromising full on power, stretching the mantle of saxophonist John Coltrane's later years by over-blowing his way through abstract long form improvisations. Other progenitors, such as saxophonist Albert Ayler, also come to mind in Gayle's co-opting of simple folk melodies as the launch pad for some of his extravaganzas, like this set's appropriately named "Homage To Albert Ayler." Not that Gayle sounds like either man. Religious similes such as preaching, prayer and incantation are often invoked to describe the reedman's passion. And aptly so, as Gayle explains in the liners that it all stems from the spirit and is dedicated to God, even if it is an expression of worship unlike that known in most churchgoing circles.

Drummer Michael Wimberly fashions a barrage of thrashing polyrhythms in response to the leader's exhortations, while bassist Michael Bisio is, for much of the time, a subliminal presence, creating a muscular undertow which comes to the surface in the quieter moments, such as the intricately strummed introduction to "I Remember Dolphy." Both the opening "Alpha" and closing "The Book Of Revelation" mine the same seam of emotionally charged oratory. However, in many ways the slightly more restrained "I Remember Dolphy," with the horn man hollering on bass clarinet, lodges in the mind longer, as the trio allows greater air to circulate between the peaks of intensity.

As fine as the playing is, two factors might give pause for thought. First is Gayle's extolling of his religious beliefs over a loose groove on "In The Name Of The Father," where he equates homosexuality and abortion with sin, the first time such sentiments appear on disc, although they have surfaced previously in occasional concert reports. Second is the grainy sound quality. Bursts of feedback and distortion, as well as muffled crowd noises betray the origins of this set as an audience recording. Newbies might find there are better places to start, while completists might get more than they bargained for in the awkwardly unvarnished actuality.

Alpha; Homage To Albert Ayler; I Remember Dolphy (Eric Dolphy); In The Name Of The Father; The Book Of Revelation.