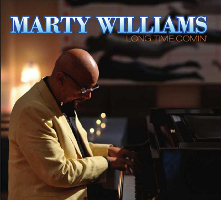 Bay Area fixture Marty Williams does not have a pretty singing voice. It doesn't need to be because it is a commanding one—readily identifiable, friendly, accessible and honest. and worth much more than being pretty. Doubly talented, Williams has a piano style right out of the righteous songbook of Junior Mance, Les McCann, and Gene Harris, full of blues, bluster and block chords that inform every song he performs. Together, the two talents make Long Time Comin' a song stylist's dream: hip and smart.

In the dozen songs covered, Williams spans the width and breadth of 20th Century popular music's golden age. From the 1930 Hollander/Lerner "Falling in Love Again" to 1967's Bacharach/David "The Look of Love," Williams applies his own unique stamp to the recital, making all songs his own. Williams imparts an easy, sure swing to all the songs, seasoned with his churchy-roadhouse piano playing. This is most easily heard on his cover of The Beatles' sinister "Come Together," propelled by bassist Ruth Davies, and supercharged with guitarist Eric Swinderman's wah-wah, Williams need only accent the song, which he does with all his funky grace.

A second example of Williams' viral command of music in his performance is "Compared to What." This song is so iconic—so closely associated with Les McCann and Eddie Harris' nuclear performance at the 1969 Montreux Jazz Festival, documented on Swiss Movement (Rhino, 1969), that covering it is all but unthinkable. But Williams carries it off, with a raging grace and the exquisite soul-jazz piano of which he is a master; the double-fisted vehicle of social protest.

Williams' almost eccentric singing style is best displayed on "Falling in Love Again," "Love for Sale," and "Sunny," where his' vocals remains stylishly behind the beat, in a fractured rhythm recalling Thelonious Monk compositions. Williams achieves perfection in his vocal and piano approach on "Love for Sale" and "Caravan," two of the lengthier pieces on the disc, where his patience and deliberate pacing frame these songs in an architecture conducive to soloing and straight playing. Were these performances any shorter, they would be too short.

It is obvious that Williams enjoys what he is doing, and does it with the relative ease of a true professional. So satisfying is this music, it should be canned and sold as a soul-food staple.

Brother (Where Are You); Caravan; Come Together; Compared to What; Falling In Love Again; Love for Sale; Mercy, Mercy, Mercy; Monk's Dream; On A Clear Day; Sunny; Sweet and Lovely; The Look of Love.