BY KARL ACKERMANN
February 10, 2017
Sign in to view read count 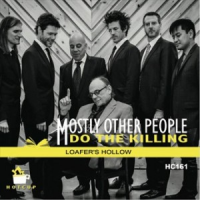 Blowing up Mostly Other People Do the Killing from its core quartet to a septet may seem like an invitation to dance on the musical third rail. The group that has always straddled the broad and fuzzy line between tradition and chaotic improvisation, has nevertheless managed that process with a mixture of sophistication, revelation and unbridled enthusiasm. Loafer's Hollow is a surprising entry to their catalog of one-dozen releases.

What is unusual about Loafer's Hollow is that the original Elliott compositions are firmly rooted in the swing era of the 1930s-1940s, a more demarcated parameter than the bop/free improvisation/chamber jazz amalgamations that MOPDtK typically work with. That is not to say that these pieces are in any way staid or formulaic; each retains that undefinable MOPDtK stamp of idiosyncrasy.

"Hi-Nella" would be at home as the soundtrack for a Max Sennett movie despite a late song solo improvisation from Bernstein. "Honey Hole," Mason and Dixon" and "Meridian" show Elliott's remarkable ability to capture the feel of the period while "Glen Riddle" has an infectious big-band swing that culminates in some brief free-form wailing. "Kilgore" and "Five (Corners, Points, Forks)"—while not abandoning the concept—are a bit more free-wheeling in approach.

Loafer's Hollow puts a fresh spin on period music, not just by infusing it with free improvisations but by developing distinct characteristics within the piece-to-piece variations. The larger ensemble adds a fullness to the sound and Seabrook's banjo brings an occasional touch of Americana. The titles are—as per usual—names of Pennsylvania towns and five of the pieces are dedicated to authors Kurt Vonnegut, Thomas Pynchon, James Joyce, Cormac McCarthy and David Foster Wallace. This may be MOPDtK's most accessible album but that shouldn't be a deterrent to those who like this band on the quirkier side. There remains quirkiness to spare.