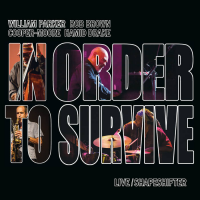 Another stellar effort from the genius known as William Parker, Live/Shapeshifter uses the immense talents of his "In Order To Survive" group -which consists of long time collaborators Cooper-Moore on piano, Hamid Drake on drums, and Rob Brown on alto sax—to craft a statement of free-wheeling dynamism at play. One of the top composers and bass players to ever take up the art form known as jazz, Parker offers up a double album's worth of material, all of it recorded live at the ShapeShifter Lab performance space in Brooklyn, NY. And what a recording it is!

Like his previous (and highly recommended) efforts with the group "In Order To Survive," Parker gives all the members wide latitude to bring it. Parker himself never seems to run dry of creativity. No matter how often one listens to his bass lines, there is always something new to discover. Take note of his amazing rumbles on "Eternal Is The Voice Of Love—III," just before Brown enters with a flute solo. Or his strong and masterful bowing at the start of "Eternal Is The Voice Of Love—V."

Speaking of Brown, his solo at the beginning of "Eternal Is The Voice Of Love—IV" demonstrates his ability to take an abstract line and pursue it through a number of radical and furious changes, all this atop the stunning free playing accompaniment laid down by Cooper-Moore. Brown's alto sounds like a July 4th sparkler, with bright shards of music spreading everywhere at the same time.

The song also features the immaculate Hamid Drake, who works all the cymbals with sizzle. While spontaneous in effect, there is great clarity in Drake's playing across the trap set, from bass drum to high hat. And on "Demons Lining the Halls of Justice," he backs Cooper-Moore's intense piano phrases with arrhythmic plops and rolls that enter and exit at just the right time. Not to be left out, Brown issues wails atop Parker's chordal strums and rapid plucks, which at times are picked up and emphasized by Drake.

On "Newark (for Grachan Moncur III)," in homage to the In Order to Survive alum and hard bop trombonist, Parker delivers an abstract bluesy sequence, and at its end, a rumbling solo that generates great feeling even in subdued tones. This continues into the soulful tune, "In Order to Survive," where the lyrics implore:

Filled with tremendous energy—like a wildfire ripping through a dry forest—the music of William Parker is "unforgettable." Having played with David S. Ware and Cecil Taylor, such energetic music is understandable. But Parker, through his innovations and thoughtful creations, has carved out his own wing in the pantheon of jazz, a wing where this album will hang high.