By Phillip Woolever
July 20, 2019
Sign in to view read count 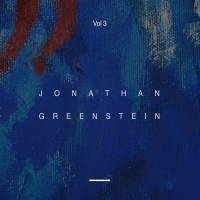 Some of the freshest jazz to be found sometimes orbits outside typical trajectories. That is the case here with Greenstein, whose Vol 3 EP wasn't released on a major label but compares quite favorably to higher profile albums from more recognized sources.

Greenstein, on saxophone and keyboards, is a relatively new voice, setting a course well worth following over approximately sixteen minutes of solid composition and musicianship. He doesn't need to pound listeners over the head with his playing, and that restrained approach is effective, aptly demonstrating the composer's philosophy of understatement as a definite strength.

Greenstein describes himself as a storyteller who provides starting points for listeners to use their imagination. There's plenty of imagination put into this project. Even the song sequence fits well. "It's great for a short trip in a car, bus, train or plane in exploring emotional journeys and short stories in jazz music," described Greenstein. "I do try to offer an anti-hero, more delicate alternative to the macho tenor playing style most common today." Production is solid, but not flawless, something in the drum mix sounds lacking though drummer Jonathan Pinson is obviously skilled. It could be the headphones.

"Grey Skies from the ATL (To a Broken Israeli Heart)" offers a cinematic theme by way of a hazy horn that conjures the title image very well. Keys float across an expanding foundation as the sax softly simmers to a nice holding pattern and gets the album cooking on high. "HelpDaynaStephens.org in Gm Part 2" is a ballad that continues a consistent call-and-response structure between keys and the horn, including some nicely nuanced bass lines. The song closes with a saxophone fade-out that could have gone on longer.

"In Walked Lion" is a soft textured highlight that achieves its roar behind an ace refrain. Greenstein states the piece is "a little tale sharing how I understand the world." This subdued gem backs up that viewpoint with understated abandon toward a realm worth exploring and worthy of mainstream airplay. "Royals" closes the album with a sweetly swinging solo over nice piano that should leave listeners wanting more.

On the basis of this highly respectable effort, it sounds like Greenstein has even more to offer in the future. It could be very rewarding if he takes a few more chances. Let's hope this record, and his name, gets around.

In Walked Lion; Grey Skies from the ATL (To a Broken Israeli Heart); HelpDaynaStephens.org in Gm Part 2; Royals.