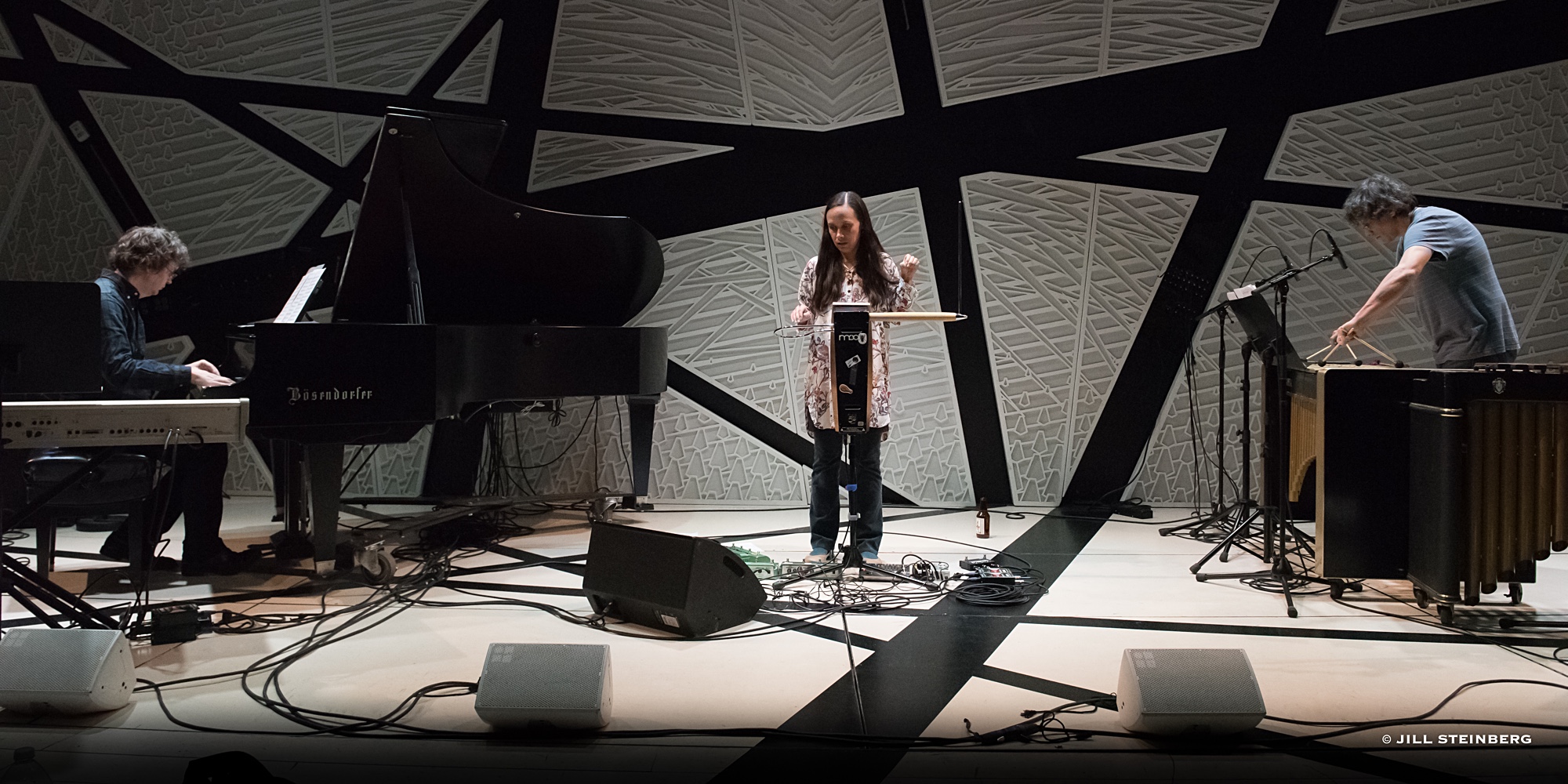 The Rubin Museum now seems to have eased off on its penchant for strictly all-acoustic performances, with microphones in place for this recital by the Indian sarangi player Sabir Khan, returning a long time after his 2006 visit. The sarangi is a smallish box-shaped string instrument, looking like a complicated violin, but sounding more like a cello. It has similar qualities to the various types of Arabic rebab, but with many more sympathetic strings (metal), beyond its three prime strings (gut). It's played with a bow, and with hard nails applying pressure to the strings, rather than soft fingertips.

Khan was joined by Aditya Kalyanpur (tabla) and Falu (tanpura), as well as providing his own electronic drone. Khan sometimes tapped the strings with the flat palm of his hand, but he mainly bowed with a deep, granular flourish, opening up the set alone, with an extended alap introduction. Kalyanpur's tabla entered, and a slow flow commenced, with extended notes, or swift flashes of detailed running, drawing out the eventual heated climax, which arrived with lightning flurries, and smeared tabla skin-wobbles, slippery in nature. Khan had acknowledged Falu as a fabulous singer on the New York scene, but then he proceeded with a Rajasthani folk song, providing vocals himself, not offering the microphone to her, which was a small disappointment to conclude an exceptionally atmospheric and expressive gig.

Later the same evening, just a short amble uptown, drummer Steve Smith led his Organ Trio, which is dedicated to the upheaval of 1960s jazz groove. Smith himself has devoted considerable time to the study of Indian classical music, and is dedicated to that craft as a significant influence on his jazz and rock stylings. The Groove: Blue repertoire was delivered together with Tony Monaco (Hammond organ) and Vinny Valentino (guitar).

The late set at Birdland was well-populated, with energy-sizzle left over from the earlier show. These three players were laughing and grooving straight off, the spirited audience locked into the experience immediately, firmly aligned with these swirling cruisers. Monaco enjoyed the sustained tone of his instrument, relishing its tidal rush, as he upped the volume curve. Around 15 minutes in, with "Indonesian Nights" underway, Valentino was vocalising along with his guitar solo (no mean feat to perform such an act with 'good taste'), whilst Monaco and Smith led the crowd along with swift handclaps. This trio overflows with retro funksomeness, a pact that began when the bandleader and Valentino met Monaco at a heated Jakarta all-night jam session, whilst appearing at the Java Jazz Festival in 2011.

Most of the set's repertoire was taken from their 2015 album, although opening with "Vinny's Blues." Following "Bugalu," they veered into "The Brush Off," which unsurprisingly featured Smith on the lighter sticks. A sophisticated slinker, it provided some respite before the trio hurtled into "Caravan," skipping and prancing, as Monaco churned out an enlarged solo, pumping right at the heart. Smith provided an equally monstrous drum solo, now brandishing sticks for a full assault of complex patterns. For "It's Only A Paper Moon," Smith invited Swaminathan Selvaganesh to sing, and play the kanjira (a south Indian frame drum), with the Chennai native alternating konnakol (Carnatic classical music percussion-talk) phrases with Smith, at bewildering velocity. In the evening's final drum solo, Smith suddenly whipped out a pair of glow-sticks, as the stage lighting was killed. These groovemeisters know all about entertainment, but Smith favours an intricate and substantial incarnation of the groove, promoting a complex manifestation of earthy head-nodding.

Los Angeles pianist Billy Childs chooses his sidemen well, but perhaps too well, if he was in danger of being a player with an ego enlargement. This quartet's team of Ari Hoenig (drums), Hans Glawischnig (bass) and Dayna Stephens (saxophones) all tend towards an energised, extroverted expression of their considerable powers, so perhaps Childs can be content as an august leader-composer figure, rather than feeling the need to compete with his own supercharged employees.

Childs is lately returning to a sharpened tough-bop sound, though he sometimes flies off with a cocktail slickness. The evening's second set opened with "Backwards Bop," then moved into "Aaron's Song." Glawischnig pricked out individual notes with decisive articulation, as Hoenig began to accumulate his rhythmic embellishments, never at the expense of an actual propulsive beat, making the whole process seem very relaxed, giving the occasional deep kick on his bass drum. Stephens has the best full roundness when choosing tenor, but he proffered a ballad breeze on soprano for "Aaron's Song," which had the feel of a mini-suite. It had a somewhat schmaltzy solo interlude from Childs, though Stephens and Hoenig worked together to ignite it fleetingly.

Sticks and bow set up a complex relationship for "Dance Of Shiva," the leader getting fluid, soloing in clipped fashion, to suggest the sound of a melodica. Childs selected "Stay," but it wasn't the classic David Bowie song, but rather a composition of his own, involving a piano-saxophone duel. Stephens got soft on tenor, the set closing with "The Starry Night" (the tunes were all extended in nature), a favourite selection that they'd apparently included on every set in this Jazz Standard run. It was here that Stephens had the perfect platform for a soprano saxophone torrent of staccato notes, closing the set with one of its most gripping excursions.

The Stone Commissioning Series has a regular home at National Sawdust, in Williamsburg, Brooklyn. John Zorn selects artists once a month, presenting the premiere of a work, with his penchant for variety now reaching the theremin, as controlled by Pamelia Stickney. This Californian specialist (although she appears to dwell in Vienna now) was previously known as Kurstin, but has returned to her birth-name. Stickney was joined by Stuart Popejoy (piano/keyboards) and Danny Tunick (marimba/vibraphone), to present "Peripheral Vision, Escape Routes," which is essentially a collection of shorter compositions, not exactly sounding much like a suite.

It soon became apparent that, besides the sometimes ethereal nature of her tunes, Stickney was set for a complementary side-order of helium comedy, verbal introductions to works, manifested as fast-talkin' stand-up routines. She also warmed up with some improvising moves around the theremin, gesturing to produce some very vocal sounds, descended from the typical 1950s science fiction movie soundtrack realms. Stickney employed foot-loops to establish tonal spreads, revealing an unusual clutching hand-gesture not usually seen amongst theremin players. This facilitated some sharp, cut-off sounds, with her fast finger-flicks producing a more angular sound than perhaps expected by much of the audience.

Stickney eventually cued the piano and vibraphone entries, issuing male and female vocal characters in turn, as she forged sonics out of thick air, finally finding a Hawaiian guitar tone. Popejoy switched to electric bass for a spell, as Stickney heralded a Georgian folk aura, also wondering whether she's 'telenosic,' which might be telekinesis for the olfactory talents. This was just a small part of her madcap chatter, her fast-fire wit being as hot as her theremin abilities, as she gabbled about being this way because her parents ingested so many Californian drugs. Such verbal hyperventilation made a pleasing companion for the contemplative washes of Stickney's music, and its enquiring visual imaginings.

Shooting across to Manhattan's Greenwich Village, an hour later we found the presently London-dwelling troubadour Sam Amidon, down in the Poisson basement. He's ostensibly a folk song interpreter, but a recent emphasis on original works has made Amidon's stance less easily definable, especially as his chosen playing partners sound more steeped in jazz improvisation, or sometimes noise-rock spontaneity (played in a quiet way). Amidon was joined by Thomas Bartlett (piano), Sam Gendel (alto saxophone) and Alexander Turnquist (drums), the leader switching from acoustic guitar to a sawed violin, as if steeped in Jon Hassell-type effects, dragging and free-formed. Then, an avant hoedown developed. Amidon chose banjo, and a Bartlett key-repeat had the flavour of Penguin Café, the artist otherwise known as Doveman often relishing so much echo that he sounded like a guitarist. With Gendel adding a saxophonic harmoniser, their trio sound became a touch mysterious, in terms of sonic originations. It's a wise decision for Amidon to tilt his approach, following a decade of attention, and this heralds a fresh phase in his evolution, where the audience can't be so solidly sure which fork in the road he'll be taking next.