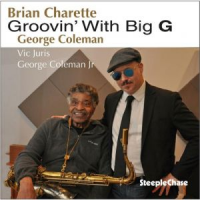 Groovin' With Big G was destined to come about. When a young Brian Charette was cutting his teeth on jazz piano gigs in his home state of Connecticut in the early '90s, he wound up working dates with drummer George Coleman Jr. The two struck up a friendship, and Coleman's encouragement helped Charette make the leap to New York a few years later. Coleman even let the budding pianist crash in his rehearsal studio for a spell.

Some time later, after transitioning into the world of jazz organ and going all in with the purchase of a Hammond B3, Charette's instrument took residence in that very same studio. There, this pair was free to practice and jam to its heart's content. On one particularly memorable occasion in said spot, the drummer's famed father—George Coleman, Sr., the Memphis Mafia tenor titan known for his unflagging attitude and virtuosity—dropped in to play with them. Whether they knew it or not at the time, the seeds for this album were planted at that very point.

Fast-forward more than two decades and we come to the moment when those aforementioned seeds began to sprout. The younger Coleman called Charette to see if he could join the elder in a gig in the saxophonist's hometown of Memphis, Tennessee. That fruitful collaboration, ultimately, led to this one.

A wonderfully limber outing wedding the Colemans with Charette and ace guitarist Vic Juris, Groovin' With Big G maintains the jam session vibe that these men are so accustomed to. The tunes, save for a soulful "Father And Son" credited to Charette and shaped by this foursome, are all jazz warhorses. But this crew doesn't view these standards with a sense of "been there, done that" apathy. Instead, these musicians make a few tweaks here and there, saddle up, and enjoy seeing where the ride takes them. A comfortably swinging "Stella By Starlight" sets things in motion and leads to a light-as-air "Body And Soul," a performance modified with a waltzing gait ; a streamlined trip through Tadd Dameron's "On A Misty Night" ends with an arrival at Lou Donaldson's "Alligator Boogaloo," where some zany Charette-isms lighten up the outro; and the closing triptych—a low-temperature "Autumn Leaves" enlivened by a vamping send-off, an appropriately tender "Never Let Me Go," and a quick jaunt through "Tenor Madness"—offers all parties some room to shine in various lights. As if we need a reminder about the saxophone-wielding Coleman's stature, Charette also includes a take on Herbie Hancock's "Maiden Voyage" as the centerpiece. It nods to Coleman's work on the original while inhabiting its own dreamy space.

There's such a natural fit from musician to musician and band to song here, and that shouldn't come as a real surprise. These men are in their element when digging into chestnuts like these, and this quartet is top-shelf all the way. The chance to hear Brian Charette grooving with George Coleman, Sr. and company is simply priceless.