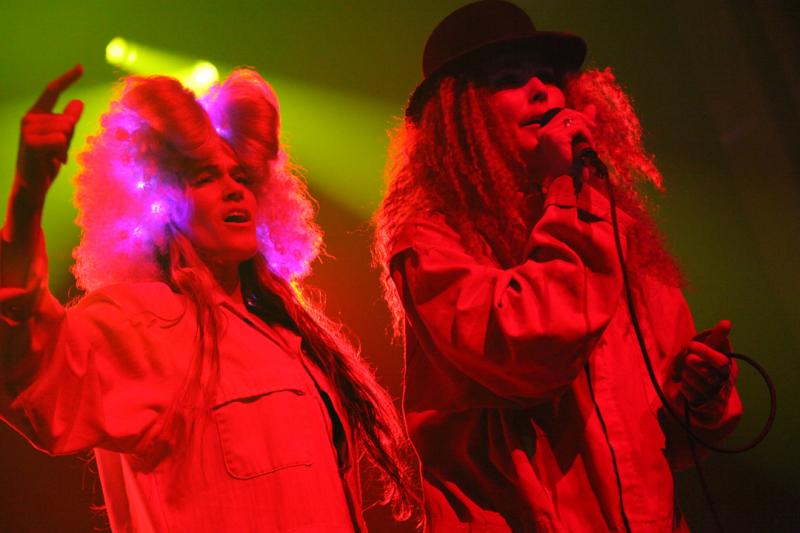 The Casady sisters are one of the quirkiest teamings in... what? Rock, folk, hip-hop, reggae, electronica, performance art? All of these, and more, are present in their wildly gambolling songs, discernible as trace elements, but none fully emerging as what could be deemed an overbearing style. Sierra and Bianca are somewhat akin to an imagined avant music hall act, who are trying to escape from ill-advised opera leanings into a b-girl fantasy, shambolic wordy rap-poems stemming from a fetish for dressing up, eternally childlike in their mischievous antics. The songs sound like CocoRosie look: disguised under wig-overloads, messy make-up, arcane symbolic flashes and cluttered dreamscape clobber. Clowns are the principal wardrobe inspiration, right now, with both Casadys clad in baggy overalls, with brightly-fuzzed thatches, gradually unzipped and partially removed for added gyration potential.

The performing unit remains stable, with a minimalist set-up that still facilitates a spreadable sound. The sisters contribute keyboard, percussion and guitar parts, when they're not cavorting stage-front. Beatboxer Tez filled the looming Webster Hall with raspberry basslines, but also has skills in the multiple-layered mimicry of a turntable, spluttering out high, low and medium frequencies simultaneously. Aside from being a major part of the band sound, Tez also stepped out to offer his own mini-set of solo acrobatics, decisively winning over the crowd.

Meanwhile, another keyboardist maintained the spinal structure alongside Sierra, freeing her up to prowl around the stage. Her operatic training is still evident, but she keeps the shrill trilling in check, subverted towards more covert ends, as a remarkable contrast with Bianca's less tutored, fricative emissions, which arrive more from rap and dancehall reggae. The newer material sounded more ethereal in character, inhabiting a folksier plane when compared to some of their earlier electro-rap-reggae tipovers. Space was left in between the variegated elements, but there were still frequent opportunities for skipping, bounding and madcap gesticulations. To conclude, the lights brightened slowly, revealing opening act A Tribe Called Red, joining in at their banks of equipment.It was a substantial set, where gusto of delivery was sustained, the Casadys appearing genuinely enthusiastic in their audience (and interpersonal) communications.


The Dastan Ensemble are one of the globe's chief proponents of Iranian music, with a particular mission to tour the world, spreading the Persian style. Their evening at Roulette had a long queue forming well before showtime, with the ground floor being close to capacity, the balcony quite well populated as well. The first set was arguably the most essential, as it featured singer Mahdieh Mohammad-Khani, who has recently been appearing regularly with the Dastan crew. The poems of Forough Farrokhzad were set to the music of Hamid Motebassem. Mohammad-Khani enunciated very softly, and with great subtlety, one of the highlights being a vocal and kamancheh (spike fiddle) duet. The line-up also included tar and barbat (long and short-necked lutes), The second set was devoted to instrumental music, as if the concentrated speciality of the first half could lead to the release required for extended pieces to flow on their improvisatory stream. Percussionist Pejman Hadadi was an informative and communicative bridge to the crowd, his impressively extensive spread of skins allowed to dominate more as the pieces became more wayward and unrestrained by the demands of the more formal first half.

Since your scribe's last report from Trans-Pecos, this Ridegewood, Queens joint has developed much further, with a new bar and a frontal café, picking up greater momentum as a result. This climactic edition of their September Sunday afternoon outdoor season featured one of no wave's (and subsequently avant Brasilian) finest artists, singer/guitarist Arto Lindsay. The previous week was headlined by James Chance & The Contortions, those other principal movers from that same late-1970s NYC scene.

Lindsay reined in the activity levels, performing solo, speaking his unique language of angular noise matched with diaphanous alt-samba. It's a highly successful combination, never failing in its jarring mission, each aspect of the sound benefiting from close proximity to the other. He makes his blurting string-flays sound almost accidental, but each rhythmic judder is carefully controlled, skating close to chaos. Lindsay's voice is no conventionally beautiful creature, arguably unsuited to samba-bossa spuming, but possessed of a breathy drift that's simultaneously knowing and naive. He's having a personal joke, but it's not at the audience's expense. Twinkling humour collides with a savage rending sound. When he solos, abstract explosions occur, as if issued from a deformed kora, but whilst he's singing, Lindsay is one of the best rhythm guitarists around, playing with a percussive accuracy, and a sensitive approach to space.

For the last stretch, he was joined by Fox, who provided a dubby skitter, giving Lindsay more scope for hacking sideways across the beat. Then, the other two Zs joined in, soiling into an unholy cacophony, Hillmer erupting into distortion bursts whilst Higgins introduced pedal refractions. Lindsay was intent on slicing with his editing scalpel, not wanting each number to overstay its welcome, keeping the flow tightly moving.

One of the more unusual instrumental combinations, this collaboration has a continuing life, now that the duo's second album has been released, eight years after The Enchantment, their debut. Piano and banjo are not normally natural bedfellows, even within an old school jazz combo. It's not even certain what kind of audience a gig like this is supposed to pull, but Béla Fleck has made more excursions into jazz than Chick Corea has made into Americana rootsiness. Ultimately, it becomes a third entity, a general flow of musicianly exploration that contains multiple modes. Fleck sat glued to the side of Corea's piano, as if taking lessons, the casual vibration being that of a fireside conversation, relaxed and therefore traipsing with high velocity risk-taking, notes flying with aligned precision, as the tour rolled onwards and the licks became increasingly interwoven.

One note of caution must be sounded, as it became apparent that there was a startling percentage of audience members running for the hills, well before the gig's conclusion. Even though there were a pair of healthy halves, this was not one of Corea's typical marathon extravaganzas, so it's possible that each natural fan-base might have been alienated by the presence of a foreign body. This is not what's expected from followers of either Corea or Fleck, both presumably attracting the adventurous sort of crowd.

Of course, when there are only a pair of players, sticking to their core instruments, there is less opportunity for variety and shading, but this was no static display of virtuosity. These two are stand-up comedians as well! Both instruments remained quite pure, with Corea mostly dominating in terms of both clarity and soloing activity. Fleck's tone and delivery are smoother and more house-trained than the traditionally rugged banjo twang, vibrato and rattle, placing him closer to the piano, melding as one rather than providing a worrying contrast. It would be instructive to catch these two players operating at the electrically extreme ends of their palettes, which would doubtless provide greater musical tension. The dexterous charms of this gig were paramount, but the show would have benefited from an increased level of conflict. It looks like Corea and Fleck are almost having too much fun on their ultra-harmonious journey!

When G. Love was a stripling, John Hammond helped him gain access to a blues joint, following a chance encounter. Some years later, Love graduated to producing the 2007 Hammond album, Push Comes To Shove, once he'd developed his own career as a performer. Their latest intersection happened at this gig, when Hammond selected Love as his co-performer. The elder blues statesman opened the proceedings, joined by Love at the climax of his set, then after a break, Mister G took hold of the reins.

Hammond always performs at the extreme end, filling his voice with a hollering swoop, united with slashing, percussive picking and wailing harmonica blasts. "Heartache Blues" was on that '07 disc, so he slipped that in early, customarily swapping between acoustic and National steel guitars. Then he delivered an atmospheric "Sail On (Honey Bee)," Muddy Waters leading to Blind Lemon Jefferson's "See That My Grave Is Kept Clean," an even more evocative rendering, mournful qualities thoroughly savoured via slow stretching out of melody and phrasing. When G.Love came onstage, they played Jimmy Reed's "Honest I Do," alternating verses, with Hammond's guest flying up in the higher range. Moving on to Little Walter, their guitars weren't quite knitting together, but this didn't dampen the excitement.

G. Love's blues have more of a country inflection, his influences clearly spreading wider than those of the hardcore Hammond. He's more of a picker and a strummer than a slider, though the bottleneck was whipped out a few times. Love follows his mentor in the foghorn harp stakes, and also chooses the 12-string guitar for several songs. He broke two strings during a single number, which must be some kind of record. In keeping with the venue, his "Drinking Wine" was a singalong stand-out, the evening's anthem, complete with bottleneck and whistling asides. The set peaked with Lead Belly's "New York City," taken at a rock'n'roll pace.

Trio 3 is alto saxophonist Oliver Lake, bassist Reggie Workman and drummer Andrew Cyrille, here joined by pianist Ethan Iverson, of The Bad Plus. This second set of the evening represented one of this club's more extreme musical outings, the players traversing a variety of zones, from prickly free-form to near-silent balladry. Workman had an early crisis, as one of his strings repeatedly came loose from its mooring. Dealing well with the situation, he fixed the problem whilst including the resultant groans and rattles into the music, in time, and strategically placed. He filed away at the bridge, again in rhythmic fashion. Impressionism led towards a tentative melody, Iverson discovering a sequence. Cyrille described the number as 'open' in style, followed by the 'prescription' of his "Aubade." Its gentle theme dispersed into sparseness, Workman rummaging amongst his small selection of extra implements, subtly clicking the clavés. When the theme returned, it was almost shocking, long forgotten on this mesmerising journey. Lake's alto fury built up during Workman's "November 1st," joined by ornate cascades from Iverson. Cyrille unsurprising opened "Tribute To Bu" with a drum solo, calling up the spirit of Art Blakey. As with the Corea/Fleck gig, quite a few folks had hit the trail by this point, but they were presumably casual punters set on a visit to the Blue Note, maybe not aware that this was going to be something of an atypical set for the club.