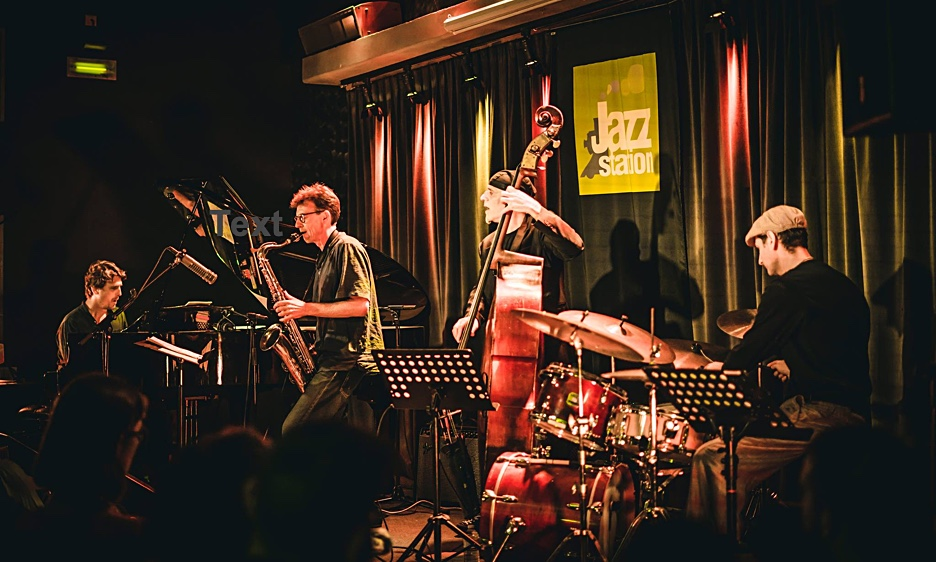 Much of this evening's programme featured compositions that are probably of interest to jazzers, particularly with the presence of George Gershwin and Leonard Bernstein, although Aaron Copland and Samuel Barber will doubtless have more crossover appeal than most composers. There was even a rock'n'roll frisson to this night, as acts such as ELP, Tom Waits and Alice Cooper have successfully mauled this raw matter. There were also filmic resonances for the Barber piece, via The Deep Blue Sea, from 2011.

The Orchestre Philharmonique Royal de Liège came across from that city for one of their regular appearances at Bozar's Henry Le Boeuf Hall, which is surely one of Europe's acoustic greats. The concert's first half opened with Copland's "Fanfare For The Common Man," with massive drum booms, and a trumpet, first joined by French horns, expanded to trombones and tuba. The work sounded oddly like an introduction, but this is the nature of a fanfare, even one as elaborate at Copland's.

Liza Ferschtman guested on Barber's "Concerto For Violin And Orchestra," diving straight in to a virtually constant, singing vibrato, soloing in conjunction with swelling strings, warm and thickly clouded. The romantic blooming bordered on the schmaltzy, but the second section was quieter, sparse and mournful. At this point, the Dutch Ferstchman's violin was almost alone, apart from a faint French horn growth, but then a groundswell began, the third phase fleet and light, with a strong staccato bite.

The second half of the show dug down into the jazz roots, the orchestra enlarged with added percussion, harp and celeste. Gershwin's "Strike Up The Band" romped and swaggered, its motion decided by the clearly swing-loving conductor Christian Arming, imparting a near cartoon intensification of the jazz form, extremely redolent of its late 1920s time period, possessing a kind of military syncopation. There was a clarinet solo, a dance of the woodblocks, and a sharply minimalist triangle chime, like a mystical jazz-age dream, misted and hallucinogenic, wearing fast-motion spats.

The longer climax was provided by Bernstein's "Symphonic Dances," derived from his "West Side Story" score, demanding even more reeds, and glorying in an exciting delivery of its rhythmic and melodic swerves. Has John Zorn ever sliced up Bernstein? Maracas brought in the mambo, using Zorn jump-cuts from when Zorn was in short pants. These were both subversions and expansions of those great themes, as Bernstein's self- regurgitations piled up the dense glorifications of those original jazz gestures, in the grandiose orchestral swing style.

From orchestra to quartet, it was a relatively swift transfer to the Jazz Station club, which is one of the core Brussels joints. It's a hike from the Grand Place hub, a converted fire station in the Saint-Josse-ten-Node area, which is just north of the European Union part of town. Its most immediately striking feature is an extremely wavy wooden ceiling, which doubtless enhances the room sound quality, as well as looking highly distinctive. Cabaret-style tables mix with rows of chairs, and there's a bar to the side, combining the airs of both club-bar and arts centre.

One of Belgium's principle players and band leaders is bassman Sal La Rocca, and January found him touring throughout the country, concentrating on the music of Shifted, his most recent album. La Rocca's regular quartet also features reedsman Jeroen van Herzeele (another prominent Brussels player), Pascal Mohy (keyboards) and Lieven Venken (drums). The agreed concept involves a fifty-fifty split between members with Flemish and Walloon roots (Dutch and French-speaking), as well as a similar recipe that springs from backgrounds that are vaguely 'mainline' and 'experimental,' though the two-and-two ratio demarcations have clearly become hazy after their time working together.

The quartet's second set benefited from a palpably warmed-up audience, with Herzeele initially winding freely on soprano saxophone, then infiltrating electronic effects around his tougher tenor eruptions. Mohy shifted from acoustic piano to electric keyboard (billed as a Wurlitzer, but in reality, probably not). Pastel luminosity in the music was reflected in the illuminated plastic panels to the rear of the room, the set including a few relaxed ballads, climbing up to a run of feisty rollers as the dramatic curve completed, tenor and Venken's drums tussling together to provide the evening's release. La Rocca himself maintained an eloquent presence, preferring to stoke continually, taking a few solos, but perhaps not enough, given that he's the bandleader.

One of the other key haunts in the city is the Sounds Jazz Club, which is to the south, in Ixelles, situated on a quiet side street. It's been established since 1986, and although it threatened to close last year, another visit to Brussels finds Sounds still pulsing with music, and still presenting bands on most nights of the week. This Monday Master Session could easily be called a jam session, as the concept is similar: opening with a fixed band set, then widening out to a steady stream of guest players. It might have been the week's slowest evening, with only a select smattering in the audience, but the music still started uncompromisingly after nine-thirty (indeed, almost 10pm), and the finish time was still pleasingly well after the Witching Hour, even though the weekend was long-gone.

The Sounds stage is quite high, with a traditional theatre look, and a rickety club logo-sign hanging at the rear. The joint has a vintage look, a mixture of time-styles that's hard to place, although defiantly not modernistic, keeping the wooden fixtures alive. Pianist Igor Gehenot led his trio, which included Sal La Rocca, deftly heating up the space with their easy going swing sound. The leader had a flowing intensity that marked him out as an Oscar Peterson acolyte, and the second set featured a posse of guitarists, as well as British trombonist Peter Maguire, who is a steady fixture on the local scene, and has been residing in Brussels almost as long as Sounds has been open. A further bonus was the appearance of tenor man Bart Defoort, another major figure in the city, sticking around to become a virtual fourth member of the band for the rest of the gig, contributing multiple dextrous and rich solos. Just before 1am, the original trio were fully returned, after some of them took various breaks, still brightly flowing into the depths of the night. By this time, your scribe was one of the last in the house, still nursing his Rochefort beer basin, ready for the homeward stroll past the atmospheric walls of Saint Gilles Prison.

A lunchtime concert in a small gallery, with just piano and saxophone, the artists mixing up their given names to make a combination duo designation. Diederik Wissels released his Pasarela album on the Igloo label, which is presently celebrating four decades of committed activity in Brussels. Nicolas Kummert was a band member on that recording, and used to be a student of the elder Wissels.

The music this pair created wafted your scribe's mind back to a relatively rarely heard ECM record from 1981, Stella Malu, by Trevor Watts and Katrina Krimsky. The Diederniko Kummsels symbiote negotiated soft nooks, opening out to misty vistas, brightly morning, or mordantly gloaming. Around 30 minutes in, Kummert shocked with a sudden break into song, at first sounding like some kind of rare overtone. His high, pure quality was reminiscent of the surprises sometimes offered by fellow subversive songsters Arve Henriksen and Hakon Kornstad. It was only for a few lines, but its effect was striking. Kummert had already hinted at this earlier in the set, by voicing through his horn, barely perceptibly, but we weren't quite certain of the percentages, as the resonances fluttered around the wooden room. Then he returned with some deep- furred tenor articulations, just before Wissels guided the floatation towards Erik Satie's "Gnossienne No. 1," solo piano fractured into a spacious contemplation of its melody, following a duo opening, then finishing with another brief vocal return from Kummert. A mesmerising performance, well suited to this early hour.

Sazz'n'Jazz is a restaurant/club home for jazz and other global-ethnic musics, operated by a Turkish booker. This late Saturday session involved Makas, a local rock combo who combined aspects of Anatolian psychedelics, traditional Turkish folk and straight-up heavy rock (band members sported Slayer and Iron Maiden t-shirts). Their line-up was mostly straightforward, with drums, bass, keyboards and guitar, but with their front man picking from racks full of various-sized bağlama (or saz) axes, amplified for a rock edge. The vocals were tackled in a collective fashion, and the most exciting songs were those that married progressive rock contortions with the hypnotic sound of Turkey in the 1970s. The saz was frequently splurted through a variety of effects pedals, taking on a heavy miasma mantle, but the vocals sometimes sounded quite folksy, adding to the music's variegated properties. Even when they got rockier, in the Anglo-American stylee, there remained a Turkish ethno-folk foundation, winding up through the mangled Makas metal wreckage.