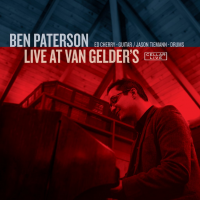 Following up his very well-received recordings That Old Feeling (Cellar Live Records, 2018) and For Once in My Life (Origin Records, 2015), Ben Paterson enters the sanctum santorium of jazz recording, Rudy Van Gelder's Studio in Hackensack, NJ. Having collided somewhere with saxophonist/entrepreneur Cory Weeds, the two initiate an idea perfect to the pair's hard bop sensibilities and something we can hope Weeds is considering for future recordings, hopefully a Cellar Live series with much more music like this.

Weeds has fashioned his Cellar Live Label as the equivalent for hard bop as Nagel Heyer and Arbors Jazz are for traditional jazz. Paterson had to have this in mind when selecting his ten songs to play with his organ trio a Van Gelder's Studio March 22 of this year.

Paterson addresses soul-jazz organ icons with funky performances of Brother Jack McDuff's "The Vibrator" and Richard "Groove" Holmes' "Sweatin.'" He then branches out to musicians known to frequent organ combos, with Grant Green's "Green Jeans" and Stanley Turrentine's "The Hustler." The remainder are devoted to hard bop proper, with Ray Brown's "F.S.R. (For Sonny Rollins)," Wayne Shorter's—by way of Lee Morgan—"Edda," and Benny Golson's "I Remember Clifford." Paterson is an exceptional organist, one who avoids every Jimmy Smith cliché to which lesser talents fall prey. Guitarist Ed Cherry plays with a sophisticated, round tone augmented with just a touch of reverb and echo. Drummer Jason Tiemann sounds as if he were born for organ jazz, always knowing where to be loud or not. This is not territory circuit greasy soul-jazz. It is that flavor, cleaned up ever so slightly for the concert stage. How great to hear drinking an ice-cold Vesper on a hot summer day.