By Doug Collette
August 4, 2018
Sign in to view read count 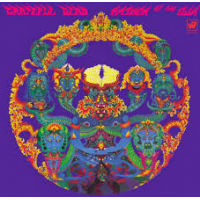 In an essay dense with historical detail and rich in provocative allusions, Steve Silberman accurately and vividly recounts the sequence of events involved in the original production of the Grateful Dead's second studio album Anthem of the Sun. The writer recounts a herculean task, the comparable likes of which has resulted in this 50th Anniversary Deluxe Edition. Continuing the series of milestone editions initiated last year with the group's eponymous debut. this double CD set is comprised of both the original and revised mixes of the album-the 1968 as well as bassist Phil Lesh's 1971 reworking), plus the earliest known recordings of the Grateful Dead with drummer Mickey Hart in tow.

The on-site audio work of the late Owsley "Bear" Stanley in the previously unreleased live portion is evidence of the august recordist's learning curve and, to be fair, the evolution of technology. Even mastered with Jeffrey Norman's usual technical expertise (itself comparable to David Glasser's on the companion disc), these concert renditions of early original compositions may only hint at the Dead's visceral power live, but also suggest the eventual durability, not to mention the improvisation potential, of songs like "Caution (Do Not Stop On Tracks)" and the entirety of the suite titled "That's It For The Other One." Pressure-tested in the spontaneity of the stage, this array of melodic, rhythmic and linguistic poetry also takes the form of a piece co-written with lyricist Robert Hunter in his burgeoning role of lyricist with the group, "Alligator," its performance here additionally notable for guitarist Jerry Garcia's tease of Donovan's "There is A Mountain" which, in extended form(s), later became The Allman Brothers Band's "Mountain Jam").

Like "New Potato Caboose," the Grateful Dead treated the product of their songwriting collaborations with some elasticity the material evolved to include the esoteric contributions of keyboardist Tom Constanten. So, it's no illusion this studio production merely scratches the surface of the songs: the finely-nuanced, somewhat thin original mix sacrifices some depth for broad(er) subtlety, while the later one practically balloons with extra presence (headphones may inevitably come into play here). Overseen by the band and sound savant Dan Healy, many of the edits, fades and transitions were done physically with the tape itself and actually mirror the intricacy of the Grateful Dead musicianship as documented from San Francisco's Winterland in October of 1967; with Hart adding his own peculiar percussion in his fledgling relationship with original drummer Bill Kreutzmann-there's more tandem drumming than interlocking of basic beats and other syncopation-there's more continuity here than might meet the ears, particularly with the inclusion of things like resident bluesman Ron "Pigpen" McKernan's reading of Elmore James' "It Hurts Me Too."

It was certainly prescient of the band to record their performances this early in their career as it provides a wealth of archival content for vault releases. In a similar vein, elaborate packages like Anthem of the Sun -50th Anniversary Deluxe Edition (overseen by archivist extraordinaire David Lemieux) ensure the relative permanence of the compact disc configuration: while there is also a picture disc available featuring the same hallucinatory art that appears in 3D form on the deep purple CD slipcase, the vinyl LP format, while it would readily contain the booklet of text and graphics. is simply too unwieldy to efficiently contain the abundance of music inside this digi-pak.