By Mark Corroto
January 2, 2017
Sign in to view read count 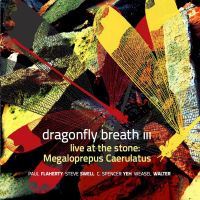 Today's zen koan: why does a watched pot never boil? The answer to that question is found in the music of Dragonfly Breath III: because it is always boiling. The roil we speak of comes from the quartet of saxophonist Paul Flaherty, trombonist Steve Swell, violinist C. Spencer Yeh, and drummer Weasel Walter.

The III of Dragonfly Breath III denotes the quartet's third release, their self-titled first disc was a live date released in 2013, and Swell's Kanreki: Reflection & Renewal (2015) contained a 31-minute live take from Zebulon track by this ensemble. All three discs have been released by Not Two Records.

The success of this single 41-minute track comes from the nearly constant turbulent swirling sounds. Just like the experience of visiting Niagara Falls, the awe inspiring energy these four produce never gets old. At first blush, you might credit the maniacal pounding of Walter's drums. A former contributor to The Flying Luttenbachers, he can be heard with improvising luminaries such as Peter Evans, Mary Halvorson, Henry Kaiser, and Damon Smith, to name but a few. His energized percussion lies somewhere between the expression of Paul Lytton and the beat of Chris Corsano. A deeper listening and the center shifts toward Flaherty, Swell or Yeh, like shooting the rapids.

Flaherty has been one of the best kept secrets of free jazz for the past 35 years, releasing music on small labels while gaining a faithful following among those in the know. The same can be said for Yeh, whose improvisations tend to center on freedom. Credit Swell for tying the quartet into a cogent unit. He leads here without governing. His music seems to be hitting his stride as the turns 60, playing with Peter Brötzmann, Dave Burrell, and Gebhard Ullmann. The energy music heard here bridges into an almost tactile sense. Not just Walter's drumming, but the bowed strings of Yeh's violin, and the physicality of Flaherty and Swell's playing. Even the quiet parts are incessant.