BY IAN PATTERSON
January 2, 2012
Sign in to view read count 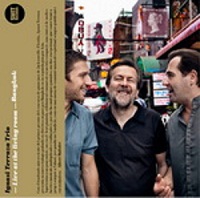 "An Emotional Dance" is an invigorating example of Terraza's compositional flair, and his ability to solo at breathtaking speed without abandoning the song's melody. Boussaguet and drummer Esteve Pi are seasoned players and provide great support throughout. Hoagy Carmichael and Stuart Gorrell's "Georgia on My Mind" begins with a delicate piano intro and Pi's brushes. Boussaguet provides leisurely counterpoint to Terraza's soulful playing until the half-way point, when Terraza takes the tune onto another plane by unleashing dizzyingly fast and swirling runs over strong left-hand jangling. The fast-paced workout of "Oscar's Will" draws from stride and ragtime as much as bop. The tuneful "Give Me Another" underlines that Terraza doesn't have to go at a gallop to impress.

Terraza makes a very Jamal-influenced trio arrangement of "Les dotze van tocant," a Catalan Christmas carol. Terraza has borrowed from Catalan folk before, with guitarist Miguel Llobet}}'s "El Noi de la Mar" given a jazzy yuletide treatment on Christmas Swings in Barcelona (K Industria, 2003), and he's clearly at home in this terrain. Catalan composer Federico Mompou's lovely "Canco num. 6" veers between softly voiced lyricism and vibrant trio interplay. The other Terraza originals include the dancing "Waltz for Auro," with a walking bass and ride cymbal at full tilt, and a calypso of irresistible rhythm and melodic charm, "Under the Sun." Boussaguet's impressive "Motherland," however, carries more dramatic ebb and flow, with Terraza's breathtaking virtuosity once again on show.

Former Count Basie bassist John Clayton Jr.'s "Blues for Stephanie" puts a bouncing seal on an excellent set. Five minutes of audio liner notes bear the visually impaired in mind, and run in Spanish, Catalan, English and Thai. It's a nice touch, and symbolic of the inclusive, all-encompassing outlook that Terraza brings to his music. His jazz may be firmly rooted in the tradition, but it contains a whole world of vibrant colors

An Emotional Dance; Les dotze van tocant; Georgia on my Mind; Give Me Another; Motherland; Waltz for Auro; Corcovado; Under the Sun; Oscar's Will; Canco num. 6; Chega de Saudade; Blues for Stephanie; audio liner notes.