BY EYAL HAREUVENI
January 3, 2012
Sign in to view read count 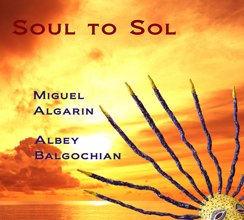 A truly remarkable meeting of spoken poetry and improvised double bass playing. Puerto Rican mastermind and poet Miguel Algarin and Albey Balgochian is a prolific and influential literary figure in the United States and Latin America, founder of the Nuyorican Poets Café, and editor of an important compilation of Nuyorican Poetry. Albey Balgochian is a resourceful and inventive bassist who has collaborated with Cecil Taylor and Dom Minasi.

Algarin is a unique storyteller, with a rich, expressive voice. He reads his poems— all from a recent anthology of his work, Survival Superviviencia (Arte Publico Press, 2009)—with passionate and theatrical authority, innocent and often brutal pathos, wise and provocative irony and a deep sense for melody and rhythm. In English and Spanish he conjures visions, emotions and life experiences from New York's Lower East Side. Balogchian envelopes these poems with sensitive and insightful interplay, grounding and contrasting Algarin's colorful and eccentric poetic flights with assured playing.

The poems reference political issues—such as the absurd Argentinian-British war over the remote Falkland Islands back in the 1980s—suggesting a heartfelt homage to Jimmy Scott on "Nuyorican Angel Voice," offering a wise glimpse of what is it a totally free improvisation state-of-mind on "Fiery Saxophonist," and reminiscing about the excitement of a kiss in "But With a Difference." "61 Year Old Junkie" tells about Algarin's meeting, many moons ago, with noted junkie/novelist William S. Burroughs, still with wonder. After remembering the lost familiar meetings between Jews and Puerto Ricans in the streets of the Lower East Side on "Proem III," Algarin moves to an angry warning about the violent American prison system in "Y En Los Eeuu," morphing into a pessimistic meditation about the Israeli-Palestinian conflict in "Aunque Ya." All these vivid images linger long after the album has ended.