By Jack Bowers
September 29, 2018
Sign in to view read count 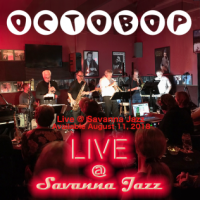 Having recorded half a dozen creditable albums in studio settings, saxophonist Geoff Roach's central California-based ensemble Octobop has added something new and exciting on No. 7—a hip and enthusiastic audience. Live @ Savanna Jazz was recorded in January 2018 at the nightspot which bears that name in San Carlos, CA. "I've always thought the band was better live than in a recording studio," Roach writes. "The energy, humor, fun and elusive sense of swing always seemed better feeding off an audience." With that in mind, recording live, Roach concludes, "seemed like the only choice."

It was for the most part a suitable choice, with the octet's carefree sense of swing outweighing the inevitable decline in studio sound quality. The audience, for its part, isn't intrusive but salutes each theme (and solo) with earnest applause. In return, it is given its money's worth: no less than sixteen tunes in a seventy-five-minute long concert. And even though West Coast Jazz is Octobop's specialty, there's not a surplus of it here; instead, the ensemble blends American standards, jazz evergreens and songs by the likes of Jelly Roll Morton, Henry Mancini, Dave Frishberg and even the Allman Brothers into a session that compensates in variety for what the group may lack in finesse.

That's not meant as a put-down. The members of Octobop are pros who play well as a unit. Solos, on the other hand, are well-meant but no better than average. In the end, sharp song selection and ebullience help carry the day, starting with one of Dizzy Gillespie's more charming and overlooked songs, "Tanga," and continuing through Charles Mingus' "Nostalgia in Times Square," Antonio Carlos Jobim's "One Note Samba" and Billy Strayhorn's "Chelsea Bridge." Morton is represented by "King Porter Stomp," Frishberg / Johnny Mandel by the catchy "Little Did I Dream," Mancini by "Sorta Blue," Duke Ellington by "The Mooche." Harold Arlen wrote the standard "Get Happy," pianist Russ Freeman "The Wind," Lennie Niehaus the free and easy finale, "Figure 8." Octobop's trumpeter Randy Smith contributed "Theme for an Imaginary Sitcom," guitarist Jack Conway "Homage" and "Linda's Waltz," the last written for his wife. Rounding out the program are Charles Albertine's "Bandstand Boogie" (yes, the Dick Clark theme) and the Allman Brothers' Dickey Betts' "In Memory of Elizabeth Reed."

This is a pretty good jazz concert, much like many other pretty good live performances in nightclubs or other venues from coast to coast and abroad. Unlike most of them, however, Live @ Savanna Jazz endures on CD, so you may listen and appraise it on your own terms.