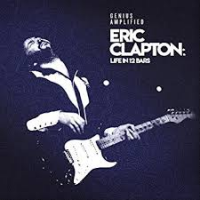 There's no scarcity of anthologies devoted to the span of Eric Clapton's work throughout his career, so there's a danger the soundtrack to Lili Fini Zanuck's documentary, Life in 12 Bars, will immediately seem redundant. Yet this companion piece to the film is perfectly complementary, deceptively discerning collection, even apart from the previously-unreleased items it contains. And while none of those five tracks are all that illuminating on their own terms, each serves the function, as means to the end of further investigation into Slowhand's influential discography.

For instance, EC has never hidden his admiration for the late Jimi Hendrix, but he's rarely displayed such clear-cut devotion as on this live version of "Little Wing." recorded in New York on Derek and the Dominos' sole tour of the United States in October of 1970. A fiery performance from the second show of October 23rd , it is all the more notable because it hearkens to Live at Fillmore East (PolyGram, 1994), a double-CD which effectively rendered obsolete Derek & The Dominos In Concert (Atco, 1973); a similarly emotive take on that tune from the guitar icon's Axis: Bold As Love (Reprise, 1967) figures prominently on the former title, as does a broader selection of material than its predecessor.

"After Midnight" and "Let It Rain," from Eric Clapton's eponymous solo LP, are similarly provocative. These two cuts are selections from the artist's own mix of his first solo album, closely resembling the one by Delaney Bramlett more than the polished likes of the official release by producer Tom Dowd. Reminiscent of his work with Bonnie & Friends—who played on those sessions—the Southern musician/songwriter's take is included in its entirety in the Deluxe Edition of the album, along with a detailed explication of the circumstances resulting in this duplication of effort, making that double disc package an essential entry into the discography of the man once called 'God.'

Other rarities on this two-CD set sound arguably less stellar on their own terms, but in an indirect way, point listeners to more comprehensive archive titles. Granted, the entire full-length recording of "I Shot The Sheriff," from sessions for 461 Ocean Boulevard, and the live performance of Chuck Berry's "Little Queenie," during Clapton's support tour to promote that comeback record, are are both clear illustrations of his backing ensemble's natural ability to find a groove and dig into it. Yet, the pair are arguably more noteworthy as jumping off points to delve into the five-disc anthology Give Me Strength: The '74-'75 Recordings (Universal Music Enterprise, 2013) and the expanded version of Eric's return from hiatus recording, during the course of which he emphasized tasteful economical musicianship within authentically rootsy material .

"High" is conceived and executed along those disciplined lines, but only became more fully realized when revived for Clapton's second post-hiatus effort There's One In Every Crowd (Polydor, 1975). This excerpt from the Dominos' aborted followup (notably sans catalyst guitarist Duane Allman to Layla and Other Assorted Love Songs (Atco, 1970) nevertheless exhibits the same concise, restrained approach that was diametrically opposed (and deliberately so) to the expansive approach of Cream. Clapton's collaboration with bassist/vocalist/composer Jack Bruce and drummer Ginger Baker was fraught with personality conflicts from the start, friction that often carried over into their musicianship, as evidenced in this seventeen-minute version of "Spoonful;" Miles Showell's mastering reveals a delicacy in an otherwise raw, ferocious performance from a show at the LA Forum in October 1968 during the seminal power trio's final US tour.

The remainder of the Life In 12 is an illuminating cross-section of Eric Clapton's career, perhaps even more so than the movie on which it is based. In requisite homage to the EC's blues roots, Muddy Waters and Big Bill Broonzy numbers begin the thirty-two tracks, the natural extension of which is a pair of titles with John Mayall's Bluesbreakers. Similarly purist material is on display here alongside "For Your Love" from The Yardbirds, the pop sensibilities which compelled Clapton to leave the group (without notice, it's worth noting, much as he left the employ of the 'Godfather of British Blues' in 1966). As if to emphasis the overall significance of Cream, comparable to that of Derek and the Dominos, a half-dozen additional tracks, apart from the aforementioned concert cull, present Slowhand (singing) at the forefront of both studio and live cuts of the threesome, preceding his single songwriting contribution to Blind Faith, "Presence of the Lord."

Other notable and diverse milestones of Eric Clapton's career come in the form of collaborations such as his 1967 guest appearance on Aretha Franklin's "Good to Me As I Am to You," his famous sit-in with The Beatles, "While My Guitar Gently Weeps," (at the request of his pal George Harrison) as well as the studio version of "Tears in Heaven," taken from Eric's soundtrack to the movie Rush (MGM, 1991), his previous collaboration with director Zanuck. The inclusion of Harrison's "My Sweet Lord" may raise an eyebrow until the detailed recording and musician credits furnished here reveal the purpose behind the original formation of Derek and The Dominos as the backing band on the late Beatle's solo debut All Things Must Pass (Apple, 1970) (one of the few moments of clarity in the documentary).

With such meticulous annotation of recording details, this package is as comprehensively curated as most of the work by Bill Levenson, the esteemed archivist who's also overseen the compilation of Clapton's Crossroads (Polydor, 1988) box and the similarly-career spanning Allman Brothers Band set Dreams (Polydor, 1989) among many other. And, as with many such compendia, the greatest value of Life in 12 Bars soundtrack may lie in piquing the curiosity and sparking the motivation of long-term fans as well as more casual viewers, motivating them to delve more deeply into the diverse musical history of Eric Clapton.

CD 1: Backwater Blues; My Life Is Ruined; I Got Mojo Working; I Wish You Would; For Your Love; Steppin' Out; All Your Love; I Feel Free; Strange Brew; Sunshine of Your Love; Good to Me as I Am to You; Crossroads; While My Guitar Gently Weeps; Badge; White Room; Spoonful; Presence of the Lord. CD 2: Comin' Home; After Midnight; Let It Rain; High; My Sweet Lord; Thorn Tree in the Garden; Nobody Knows You When You're Down and Out; Bell Bottom Blues; Layla; Little Wing; Got to Get Better in a Little While; I Shot the Sheriff; Little Queenie; Mainline Florida; Tears in Heaven.