BY VINCENT GARDNER
December 15, 2009
Sign in to view read count 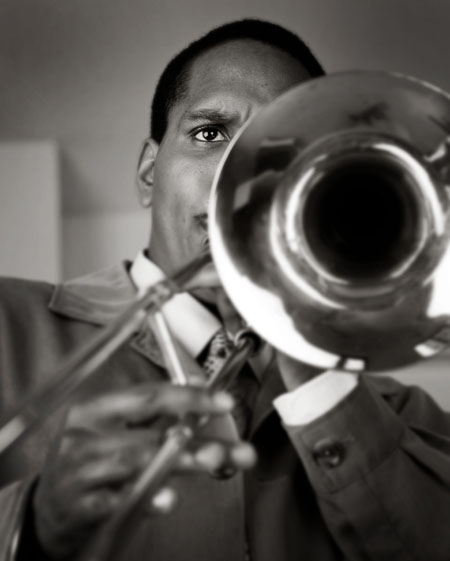 Like many other jazz musicians, I am fortunate enough to travel all over the globe and present this wonderful music. While I haven't been playing professionally for an extremely long time—only about 15 years—during those years I have seen quite a bit of change in the world and on the jazz scene. Not that it compares with New York of the '30s, '40s or '50s, but, compared to 2009, think of how much more work there was in the late '80s and early to mid '90s. What about the wonderful jam sessions all over New York run by people that we, as young musicians, looked up to, not run by jazz students? Think about how much more accountable you had to be back then. If you play too many choruses without saying something, you would probably be politely (and sometime not so politely) encouraged to end your solo and let somebody else play! But enough nostalgia, we are here now in today's jazz scene and it is up to us to define it. Look around, the masters are leaving us and leaving it in our hands. I hope our hands are big enough.

Besides, that's not even the point of this article. The point does have something to do with my earlier reminiscence. When I am traveling now, either domestically or abroad, I always see a disturbing occurrence at most jazz festivals. Not only are the festivals comprised of a dwindling percentage of actual jazz music, but when the cats are there playing, if they are not there as a sideman with an older, established musician, they are always there in tribute to someone.

The true audience that I hope to reach with this article is comprised of the concert and festival promoters and presenters... the network of people that keep jazz musicians like me working. Let me just come out and say it: Enough with the tribute bands! Don't get me wrong, the musicians that are being honored are more than deserving and an occasional tribute here and there is fine, but when that's the only way that today's jazz musicians can get a gig on a large stage, it is damaging to the natural progression of the music. When are the cats on the scene today going to have a chance to present their own directions at the largest stages for the music to which they have dedicated their lives?

One of the reasons that those older masters became as great as they were was that at some point in their careers they were in situations where they could play their own music or that of their contemporaries. Would Wayne Shorter's compositional skills have developed to the depths that they did if Art Blakey's band had to play tributes to Charlie Parker constantly? Was John Coltrane ever forced to do tributes to Sidney Bechet in order to get a gig? What would have been the effect of that on his playing if he was never able to demonstrate the new harmonic concepts he was working on in the late '50s or the expressions of his spirituality in the '60s?

Concert and festival promoters are under a misconception that they have to package music this way in order to make it appealing to the audience. The truth is, people can hear and feel honesty in music and respond to it. I can't tell you how many times that, after talking to someone who attended a tribute concert of which I was a part, they asked me, "Who was that Monk you were talking about on the stage?" My experience has been that usually they don't remember or make a connection with the person we were paying tribute to but always remember a great musical moment of the night, regardless of whose tune it was on. They always say, "That pianist could play," the point being that he could have been playing on a Monk tune or one of his own originals. If the right musicians are allowed to present their music without constraints, audiences will appreciate being able to connect with the musical vision of those jazz musicians as they see it today.

A few years ago, I was performing at the wonderful jazz festival in Vittoria, Spain with the Jazz at Lincoln Center Orchestra. There were a few tribute bands on that festival that year. Just before we played there was an all-star "Tribute to Charlie Parker" group assembled there with Wessell Anderson, Jesse Davis and Vincent Herring on the three alto saxophone frontline. Their performance was over an hour long, near the end of an entire day of performances in an enclosed theater. After all of that music, the Jazz at Lincoln Center Orchestra went on and played another two-hour concert of original music, comprised of a suite for the Vittoria Festival written by Wynton Marsalis. Now... come with me now... the audience had been there all day, hearing many of these tribute bands and then at the end we play two hours of original music. And they absolutely loved it! You could try to chalk that one up to many things if you wanted to: It's Wynton's music and they love him there; he wrote it for the festival so they were more tolerant than usual after a long day of listening to music; they paid for the whole day so they were going to get their money's worth no matter what. But what was clear to me was that they enjoyed listening to original music. Unless you are playing for a true jazz audience, listeners probably don't appreciate "So What" or any other classic jazz composition any more than a good original and, with the original, they will probably hear more of the true identity of the performer.

The last part of this statement is for the jazz artist. Since it's up to us to define this jazz world that we live and work in, let's ourselves push to play more of our own music. A lot of us will say, "Just take the gig, whether it's a tribute or not" or "At least it's a gig" and that is understandable, but do you really want to be 60 years old still doing tributes more frequently than you are able to play your own music? Presenters won't all of a sudden think, "You know, I wonder if he writes his own tunes or has his own musical vision?" It's up to us to change this.

Trombonist Vincent Gardner has recorded as a leader on SteepleChase Records and has performed with the Lincoln Center Jazz Orchestra, the Duke Ellington Orchestra, the Count Basie Orchestra and more.