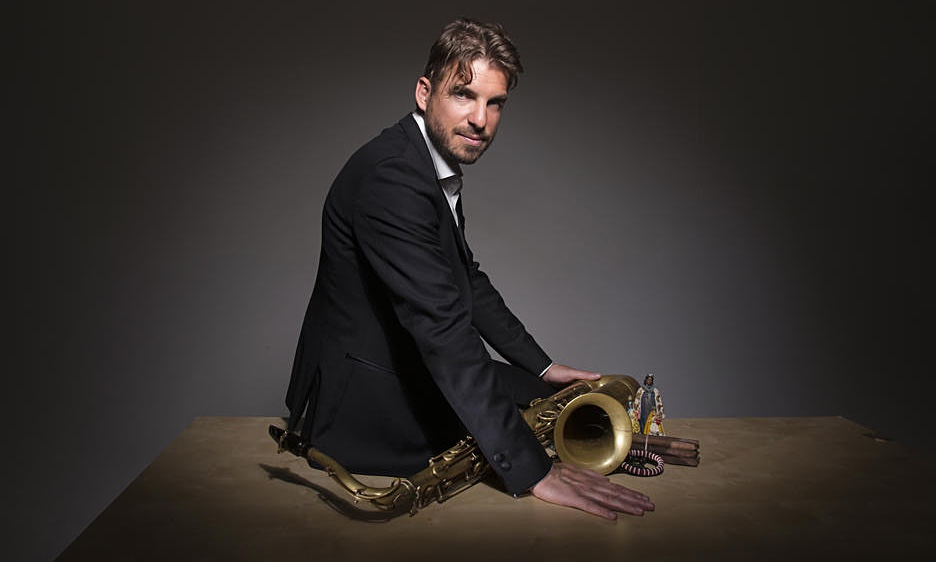 The now-annual Live Jazz Series of long-running Hong Kong arts fest Le French May might have slimmed in size and shifted from a primetime weekend to lukewarm midweek slot—yet the program's gaze has been refreshingly realigned. Where the three-day 2018 series saw visiting French jazz musicians paying tribute to French vocal legends and canonized French composers, the two-day 2019 edition celebrated vintage American stars and, most compellingly, musical traditions from Africa, the Caribbean, Latin America and beyond.

Hailed as one of French jazz's leading lights, Samy Thiébault brings an intuitive flair end evident relish to his Caribbean Stories project, a self-described musical "return to nomadism," which draws on the saxophonist's Moroccan origins and Ivory Coast upbringing, while imbibing a heady shot of Creole swagger.

Casting the schoolbook aside in favor of feel and fever, Thiébault's originals succeed in channeling the zest and verve of these differing traditions into a jazz aesthetic, with an effortless zeal illuminating the shared musical language which fueled New Orleans's midwifing melting pot. And, it's fun: The carnival mood of set closer "Calypsotopia" sees the audience chanting a linguistic hodgepodge apparently spoken by just 200 people in Trinadad and Tobago, over a sun-kissed calypso shuffle. "Posia Sin Fin" reimagines the cha-cha-cha as a modal jazz workout while the single non-original, "Presagio" by Venezuelan icon Enrique Hidalgo, is a mellow merengue bathed in a delightful Latin lilt.

Clearly groove is paramount, and Thiébault's conceptual conceit is substantively aided in its execution by the contributions of his cohorts, the seasoned, multi- ethnic quintet who also form the core of the recorded Caribbean Stories (Gaya Music Production, 2018), the composer's seventh LP.

A native of Guadeloupe, drummer Arnaud Dolman's job is made both easier and harder by having Cuban percussionist Inor Sotolongo sat to his left—the pair spinning the subtle trance-like polyrhythms which drive the whole enterprise, laid beautifully bare in the propulsive canvas they offer bassist Felipe Cabrera's solo segments.

A stalwart of Cuba's jazz scene, Cabrera plays with a gruff, unpolished virtuosity—striking angry open strings and grumpy hammer-ons, executing punch-drunk half-octave slides with the kind of irreverence only years at the woodshed breed. Left alone onstage for an extended solo showcase, the bassist's lackadaisical stream of ideas only cease when Thiébault pointedly leads the applause and marches onstage, with a trilling flute which announces "Les Mangeurs D'etoiles," an ever-bright vamp which marks perhaps the only time the leader's compositions veer towards self-conscious exotica.

Ample stage time is also handed to UK-born guitarist Hugo Lippi, who plays with a crisp, clean tone and casual grace, especially during the unaccompanied introduction to "Puerto Rican Folk Song." The liberal use of open ringing strings and chordal voicings suggest a background in solo performance, while a debt to Wes Montgomery is exposed in the block chords and crunchy octaves that punctuate otherwise fuss-free, fret-weaving runs.

Thiébault is not without his spotlight moments—the set opens with a robust unaccompanied tenor workout, laying down bold, slurring, block-sized blues notes in the manner of Coleman Hawkins, before adjusting his reed and blowing the enlivening island refrain of album opener "Santeria." Unafraid of a certain showmanship, Thiébault is a fan of the bold gesture, frequently slowing into lumbering Coltranian passages of foghorn spurts and pronounced pentatonic leaps.

A day earlier, French chanteuse Laïka Fatien opened the series with a program entitled "The Women I Grew Up With...," but an equally appropriate title might have been "The Men I Love(d)."

It's always sad and lazy to define talented women by their romantic attachments, yet the singer formally billed as Laïka Fatien has historically hailed the real word reveries and heartbreaks that she draws from when interpreting standards (as she made clear during a 2015 interview with this writer), currently working through the songbooks of childhood heroes Abbey Lincoln, Carmen McRae, Shirley Horn and Billie Holiday.

Performing in Hong Kong backed by a workmanlike trio billed as "The Unit," Laïka waited until halfway through the set to drop her bombshell, dedicating her next two songs to two men: Her husband, and the father of her two children.

The dynamite was laid, and then she pulled the leaver.

One man was sitting behind the drum set to her left, the other held a double bass at her rear.

Deployed with the hardened poise of a depth charge, the energy in the room shifted from that moment onwards.

A reflective "Quietly There" addressed drummer Daniel Garcia Bruno, whose stoic beat rumbled beneath lyrical laments: "Why didn't I see your eyes turning on me?," asked the singer. "Oh no, you couldn't see the love hidden in me." The pair separated after 14 years together, she told us, and have two sons.

Any lingering pathos was quickly dispensed with the playful skit of Horne's "Love"—dedicated to proudly grinning bassist Chris Thomas. It's clearly not the first time this story has been told, but it seems he's not bored of it just yet.

When a few songs later Laïka dismissed both men from the stage to perform a weepy rendition of Johnny Burke's Imagination, backed just by pianist Pablo Gutierrez Calvo, it's hard not to imagine she's thinking of the other musician she was romantically involved with between the two men onstage: the late Roy Hargrove. "Imagination is funny... just as I think of you," she sings, appearing to wipe a few stray tears away. The celebrated trumpeter passed away of cardiac arrest in November 2018.

It felt symbolic when the set closed, a few numbers later, with just bass and drums, the two lovers locked into a pulsing groove on "You Turned the Tables on Me."

Such raw moments of intrigue enlivened what was otherwise a pleasant but routine evening of vintage standards. Ever since the defining days of "hot jazz," the kitchen has been the genre's most ready metaphor, with the music frequently said to "cook," "steam" or "simmer." But with few expectations—most notably a head-nodding strut through Lady Day's "I Must Have That Man"—Laïka's Unit never approached boiling point, preferring a steady plod over a steamy swing, while the ballads rarely got close to that most overused adjective, "smoldering."

Calvo bopped with an unobtrusive touch reminiscent perhaps of Wynton Kelly, but his token improvisations rarely broke beyond the perfunctory, and neither Bruno nor Thomas took anything resembling a proper solo. While Laïka herself possesses a crisp tone and controlled delivery, her thrill-free approach never once appeared to probe the reach or depth of her chords, and scatting was clearly out of the question. The overall sense was an outfit either unwilling, or unable, to push itself beyond their comfort zone.

The last time I saw Laïka sing, she was backed just by Calvo and battling the clink of cutlery from disinterested diners in a noisy, Dubai restaurant. "It's sometimes amazing to see how little separates a great concert hall artist from a barroom performer," I wrote at the time. "It was easy to imagine her voice filling far grander and larger halls—and being met with the ecstatic appreciation her talents deserve."

My vision became a reality in Hong Kong, but the fit never quite felt right. Laïka's vintage catalogue and showy storytelling perhaps best belong where jazz was born: In the clubs.