Born in the Ivory Coast to teachers, Samy Thiébault received a traditional musical education at the Conservatoire de Bordeaux before entering the prestigious Conservatoire National Supérieur de Musique in Paris to study jazz (class of 2008).

While studying music, he also obtained a Master’s degree in philosophy, with high honors, from the Sorbonne (2001). The album Blues For Nel came out in 2004, followed by Gaya Scienza in 2007, and Upanishad Expériences in 2010. This last album was the first project produced by the label he created and now directs, Gaya Music Production.

With the 2013 album Clear Fire, audiences fell hard under the spell of his music, prompting the press to say of his playing that it is “Coltranian in the best sense of the word” (Nouvel Obs). Other publications were unanimous in their praise: Revelation JazzMag, Coup de Cœur France Musique, Playlist TSF, Séléction JazzNews, L’Humanité, Télérama...

Samy Thiébault collaborates regularly on dance, theatre and cinema projects, is frequently on tour with his quartet, and is a professor at the Choisy-le-Roi conservatory near Paris.

The 2015 album Feast of friends, an homage to the Doors, marked a turning point in Samy Thiébault’s career. The newspaper Libération said of Thiébault that he “dances somewhere between trance and spiritual communication.”

Feast of friends was the occasion for an international tour covering four continents over the course of one year. The group played at the main festivals and stages in Europe, securing its place on the public and professional scenes alike.

Another stage in the journey took place in 2016 with Rebirth, an in-depth project exploring new compositions by Samy Thiébault written for the quartet.

The album deals with the urgency and necessity of melody as a structuring, freeing element in the most modern, personal, and generous form of Jazz possible. This album was also an opportunity to work and record with the great trumpeter Avishai Cohen. Rebirth was released in September 2016 on Gaya Music Production (distributed by Socadisc).

In the wake of the album’s critical acclaim, Samy was a raised to the level of the “ most important, emblematic musicians of his generation” (France Inter) and the album was named “the best Jazz album of the year” (Fip). The album’s success has led to shows throughout France (venues include the Olympia, Café de La danse, Festivals de Marciac, Nice, and Sètes) and abroad (China, Korea, Vietnam, Indonesia, West Africa, and more).

This is more than enough to confirm Samy’s place among “the greatest Jazzmen of France” (JazzNews) and to set the stage for his next diptych album, scheduled for 2018-2019: a musical journey through the Caribbean and the Indies... Show less 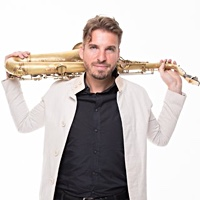 All About Jazz musician pages are maintained by musicians, publicists and trusted members like you. Interested? Tell us why you would like to improve the Samy Thiébault musician page.