By SEAN DIETRICH
January 25, 2011
Sign in to view read count
The concert guitar is hailed by many as the perfect instrument. After being perfected in the Baroque age, virtuosos believed the wooden torso to posses the variety of an orchestra. The concert guitar produces a wide range of tone, timber, color, and dynamic expression unlike any other stringed instrument, capable of projecting a delicate voice of pure emotion.

As music enters the age of electrified sound, fewer players seem to have the audacity to unplug. But amongst a mass of music technicians, there exists a small sect of quiet practitioners who seek unadulterated acoustic purity. Undistorted tones. Enter the concert guitar.

During the post-war American era, the lines between jazz and modern classical composition were blurring each and every day. Many musicians were boldly crossing the jazz boundaries with advanced technique and harmonic wisdom. Laurindo Almeida brought his classical training to the jazz realm and became an interesting patch on the quilt of American jazz music.

Originally a Rio De Janeiro native, Almeida came to America as a guitarist for Stan Kenton's orchestra in 1947. Unusual to the period, Almeida did not play the archtop amplified guitar common to the genre, choosing, instead, to use a classical instrument. As a result, he marched the classical guitar into new territory with tender, harp-like melodies and the gentle touch of his fingertips.

Brazilliance (Blue Note, 1953), was a collaboration between Almeida and saxophonist Bud Shank, and proved to be the beginning of something very new for its listening audience, as well as the classical guitar genre. Songs like "Noctambulism," and "Amore Flamengo" reintroduce listeners to harmonic colors reminiscent of Spanish composition. Another igniting track from the album is Almeida and Shank's romantic, but almost heartbreaking rendition of "Stairway to the Stars."

Charlie Byrd, a native of Virginia, began playing music as a child during the 1930s and 1940s. Byrd was spoon-fed a slaw of Blueridge mountain music and steel strings from his infancy but, as he progressed, he set out to pursue classical guitar studies, eventually under the tutelage of the world-renowned Andrés Segovia. It was during this time that Byrd began using a concert guitar at jazz sessions.

Byrd soon climbed the ranks of the national music scene, playing with Woody Herman, Bill Harris, and Vince Guaraldi. He quickly became a hot commodity, and soon musicians were crowding the clubs to hear his unique brand of South American-flavored music.

During a fertile musical era, Byrd was a key player in spurring the bossa nova bonfire which has yet to be doused in the music world. A defining career move, however, was his successful collaboration with tenor saxophonist Stan Getz in 1962. Jazz Samba (Verve) was a musical and commercial landmark that quickly became legendary as one of the most beloved jazz records in the pop-speaking world. Jazz Samba will forever sit alongside other classics like Dave Brubeck's Time Out (Columbia, 1959), and Miles Davis' Kind of Blue (Columbia, 1959). 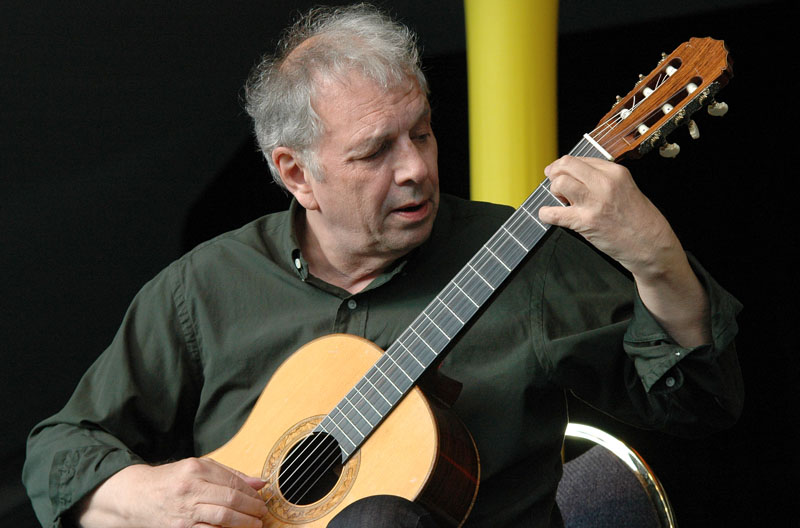 Ralph Towner is a rarity in a world of driven guitars. With nylon-stringed sweetness, Towner peppers each performance with classical nuance and sensitivity. As a maturing young man, he studied classical guitar in Vienna and played with chamber groups throughout his time abroad. In the early 1970s, after relocating to New York, he began working with the top musicians in the jazz world, like Jimmy Garrison, Weather Report, and Gary Burton.

Towner has an unmistakable talent for creating lush harmonies and rhythmically interesting phrases. The subtle details found on his recordings are at times linked to the spirit of a composer, rather than a jazz improviser. Harmonic purity and experimental outbursts solidify Towner as a champion of the instrument.

The original approach found on Towner's Solo Concert (ECM, 1980) is conceptually ahead of many jazz recordings on the shelf. The broad range of harmony and the compositional structure of songs like "Zoetrope" and "Train of Thought" are outside single classification. In many cases, Towner's unrestrained music is nearly impossible to categorize at all. And yet, keeping with the spirit of modern jazz, Towner has taken the classical guitar to soaring levels, and at the same time opened a new world for an entire generation of musicians.