BY IAN PATTERSON
January 16, 2019
Sign in to view read count 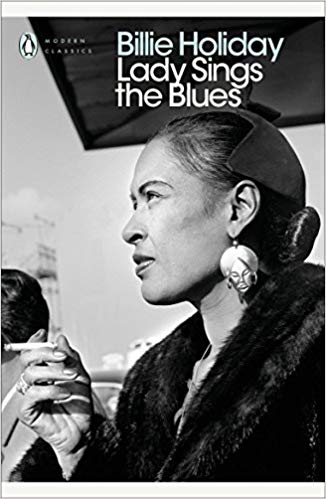 For many, Billie Holiday was the greatest of all the jazz singers, while her emotive delivery and tragic persona seemed to embody the early jazz life in all its boho chic and with all its dark undertones. Six decades after her death from alcohol-related illness at the age of forty four, Holiday remains a hugely admired and somewhat mythologized figure. Certainly the number of imitators that Holiday has spawned attests to her lasting influence. With her autobiography—originally published by Doubleday in 1956—Holiday got to tell her side of an often tempestuous story, one of many highs and lows, both personal and professional.

This Penguin Modern Classics reissue is a timely reminder of the obstacles that Holiday faced, from endemic racism and abusive men to a cut-throat music industry. It's also a cautionary tale of the personal demons that plagued her -namely alcohol and heroin. Yet for all her misadventures and her run-ins with the law, Holiday's story is also one of determination and perseverance. There's not a trace of self-pity in her tale, even when at her lowest.

Lady Sings The Blues was ghost-written by journalist and author William Dufty, who captures the gritty essence of Holiday's short life, even if some of the details have since been proven to be inaccurate. The book also received criticism for certain of Holiday's omissions, though how a person's life can be summed up in a mere one hundred and eighty pages without leaving out a few people, places and facts is anybody's guess.

Born Elenora Fagan in Philadelphia in 1915, Billie Holiday's great-grandmother had been a slave on a plantation in Virginia. Holiday claimed that her great-grandmother had sixteen children by the plantation owner, an Irishman named Charles Fagan, of whom only one survived. As for Holiday's parents, her mother is presented as a hard-working maid who took great pride in Holiday's achievements, while her father was conspicuous by his absence, constantly on the road with McKinney's Cotton Pickers and later with Fletcher Henderson's band.

With her mother working away from home much of the time and her father nowhere to be seen, the guts of Holiday's first ten years were spent with relatives, sleeping three to a bed and suffering beatings at the hands of her older cousin, Ida. At ten, Holiday describes a serious sexual assault by a neighbour, after which she was sent to a Catholic institution. At twelve she was taken advantage of sexually by a trumpet player from New Orleans. At thirteen she was working as a call girl in New York. Various periods of institutional incarceration followed, for prostitution or for punching a woman down a flight of stairs. Suffice it to say, there's enough drama and tragedy in the pages covering just the first fifteen years of Holidays' life to stage an opera.

So much of Lady Sings The Blues is concerned with Holiday's scuffles and scrapes, the hustling for money, brushes with the law and so on, that the music seems almost to take a back seat. Holiday first came across jazz and blues in her mid-teens when running errands for the women in a Baltimore brothel. It was there that Holiday first heard Louis Armstrong and Bessie Smith on a Victrola record player. Back then, in the early 1930s, Holiday notes: "A whorehouse was about the only place where black and white folks could meet in any natural way."

Holiday's arrival as a singer owed as much to luck as anything. Facing eviction in winter for rent arrears on an apartment she was sharing with her mother in Harlem, Holiday went from bar to club looking for a job as a dancer. In Pod and Jerry's—later renamed The Log Cabin—the pianist asked Holiday if she could sing. The rest, as the saying goes, is history. "Everything started for me there at the Log Cabin", acknowledged Holiday.

Musical influences were few and far between though Holiday admits to wanting "Bessie's [Smith] big sound and Pops' [Louis Armstrong] feeling." In the end, though, Holiday sounded like nobody but herself and it was her authenticity, the sincerity in her delivery that so wooed audiences. "Everyone's got to be different," Holiday asserted. "You can't copy anybody and end up with anything. If you copy, it means you're working without any real feeling. And without feeling, whatever you do amounts to nothing."

From her debut at the Apollo Theatre and a two-year stint at Café Society, where she arrived an unknown and left a national star, to her triumphant comeback at Carnegie Hall following a year's incarceration for drug offences, the musical way stations of Holiday's career are duly mapped out. Holiday, it seems, goes into greater detail describing her year-long detention in the Federal Woman's Reformatory in Alderson, West Virginia than she does any of her recording sessions with Lester Young or her tours with Count Basie.

Though Holiday was making very good money at the height of her success, racism and exploitation were constant shadows. "You can be up to your boobies in white satin, with gardenias in your hair and no sugar cane for miles, but you can still be working on a plantation", Holiday noted dryly on the reality of working 52nd Street in the late 1930s and early 1940s. Nor, Holiday claimed, did she receive royalties for any of the two hundred sides she recorded between 1933 and 1944.

Holiday's life played out against the backdrop of a racist climate, of whites-only restaurants, hotels and toilets. There was the time in Detroit with Basie when Holiday was forced to darken her face, in case she was mistaken for a white woman playing with a black band. There were lightly veiled threats too, when Holiday was hanging out with Orson Wells around the time of the making of Citizen Kane, from people who thought Holiday's mere presence could wreck the actor's career. "The only time I was free from this kind of pressure was when I was a call girl as a kid and I had white men as my customers. Nobody gave us any trouble. People can forgive any damn thing if they did it for money."

Glimpses of the caring, thoughtful side of Holiday's character are not in short supply, particularly her correspondence with G.I.s during World War Two, when she would send them record players and her discs. Towards the end of her career in 1954, Holiday realized an ambition when she made an intensive but happy tour of Europe. In London, tiring of hotel food, Holiday produced a tin of red beans that she had carried with her from the States and ended up cooking for the maids, assistant managers and elevator boys. Her concerts, forty in thirty days, were a resounding success. "The stuff they wrote about me in Europe made me feel alive", Holiday recalled.

The happy times, it seemed, were always short lived and dark clouds were never far away from Holiday's horizon. At every turn, or so it appeared, pimps, unscrupulous managers, drug dealers and the police were waiting for her, though in the end it was her own excesses that proved so costly.

"Who can tell what detours are ahead?" Holiday wondered at the end of the book. "Another trial? Sure. Another jail? Maybe." Her closing thoughts proved sadly prophetic. As it transpired, the Federal Bureau of Narcotics arrested and handcuffed Holiday for drug possession, in the Metropolitan Hospital New York as she lay on her deathbed.