BY MARK SULLIVAN
January 16, 2019
Sign in to view read count 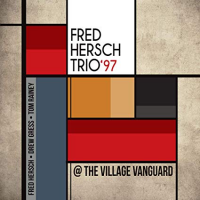 Pianist Fred Hersch has produced a steady stream of recordings in the last few years, both solo and with his current trio. The trio was featured on Live In Europe (Palmetto Records, 2018) and Sunday Night At The Vanguard (Palmetto Records, 2016). This album captures a special career moment for Hersch: his first appearance as leader at the venerable Village Vanguard, arguably the most storied jazz club in the history of the music.

At the time his working trio with bassist Drew Gress and drummer Tom Rainey had been playing together steadily since 1991, so it was a true band. Their version of "My Funny Valentine" (with a beautiful, reflective rubato piano introduction) is an expansive treatment of the standard. After a lyrical double bass solo the arrangement heats up with a light Latin groove, before returning to a ballad feel to close. "Three Little Words" is a sprightly gem, including a section trading fours with the drums.

Like Hersch's current concert programs, the standards are accompanied by originals. Hersch's "Evanessence" is a nod towards influential pianist Bill Evans, a player to whom he has often been compared. Gress contributes "Andrew John," a lovely ballad which again benefits from an unaccompanied piano introduction. "Swamp Thang" delivers on the Louisiana funk promised by the title, albeit in slightly abstract fashion. It has become Hersch's practice to close with a Thelonious Monk composition, but here that honor falls to a creative arrangement of the standard "You Don't Know What Love Is."

This historic discovery shows the consistency of Hersch's approach from early in his career. The youthful excitement and energy of the trio compares favorably to the more mature approach of the current group. It is also interesting to hear Gress and Rainey in a more straight ahead context than the avant-garde music with which they have become associated. Both have frequently played with saxophonist/composer Tim Berne; Gress with guitarist John Abercrombie and trumpeter/composer Dave Douglas; Rainey with saxophonist Ingrid Laubrock and guitarist/experimentalist David Torn (among many others).

Easy to Love; My Funny Valentine; Evanessence; Andrew John; I Wish I Knew; Swamp Thang; You Don't Know What Love Is.