Kuniko: At The Bare Minimalism

By C. MICHAEL BAILEY
October 5, 2013
Sign in to view read count
Percussionist Kuniko Kato is a total package who redefines our awareness of the vibraphone, marimba, indeed the entire percussive spectrum. If we think of the "vibes" as Lionel Hampton, Milt Jackson, Victor Feldman, Gary Burton and Joe Locke then we are missing a full half of the population of players. On her debut and sophomore releases for the British Linn Records, Kuniko turns her considerable attention to minimalism, first Reich and then he and his peers. 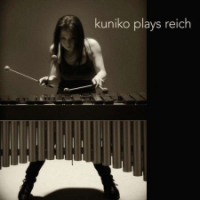 Steve Reich, along with La Monte Young, Terry Riley and Philip Glass, spearheaded the Minimal Music movement in the early 1960s. Minimal Music is characterized by consonant harmony, a steady beat, no or only slowly evolving transmutation, and often atomization of musical phrases or smaller units such as motifs. Reich certainly achieves these standards on his "Counterpoints," three (of four) of which are presented in percussion reductions on Kuniko Plays Reich.

Much discussion between artist and composer was had before final arrangements were made for recording. Kuniko proves a careful and studied musician who holds dear Reich's feelings and ideas about his music. Reich's "Electric Counterpoint" (1987) was originally composed for guitarist Pat Metheny. With Reich's direction, Kuniko arranges the three-part piece for steel pans, vibraphone and marimba. The three sections are devoted each to the three instruments, with bridging sections for the newly introduced instruments and pre- recorded tape. The music is hypnotic and mantra-like, studying rhythm, repetition and volume dynamics.

"Six Marimbas Counterpoint" is arranged for a tape of Kuniko playing five marimbas with a live solo section for the sixth. The organic sound of the marimbas makes for an earthy palette upon which Kuniko heaps polyrhythms, again hypnotically. Volume dynamics are modulated with dramatic effect. The final "Vermont Counterpoint" originally scored for flute, piccolo and alto flute, yielded creatively to Kuniko's arrangement plan. With a greater rhythmic complexity than the previous counterpoints, "Vermont Counterpoint" allow for whimsy and imagination. The vibraphone allows for a very digital quality of the music, standing as a contrast to the organic presentation of "Six Marimbas Counterpoint." This is highly kinetic music in both direction and and time. 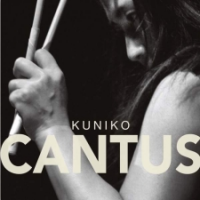 In stark contrast to the highly rhythmic Kuniko Plays Reich, Kuniko's second Linn release focusing on minimal music, Cantus revisits Reich and then branches out to other lions of the movement: Estonian composer Arvo Pärt and British composer Hywel Davies. Kuniko completes her survey of Steve Reich's four counterpoints with "New York Counterpoint" originally composed in 1985 for amplified clarinet and tape, or 11 clarinets and bass clarinet. Again, with the composer's direction, Kuniko arranges a tactile soundscape for the reeds-directed composition, recalling the whole of Kuniko Plays Reich.

Kuniko's treatment of the Pärt's "Fur Alina," "Cantus in Memory of Benjamin Britten," the composer's famous "Fratres" and "Speigel Im Speigel" is slow, low and magestic, the percussionist drawing out the human vocal qualities of vibraphone and marimba, particularly on the Britten-dedicated piece. Davis' "Purl Ground" reveals a tactile bridge between Reich and Pärt, one of evolving kinesis over a low-hum or foundation. As striking as the music is, the spectre of Kuniko in flight is equally striking from her athletically efficient performance to her precise and exquisite presence: a total artistic package, shining with grace and brilliance.