By Andrew Luhn
October 5, 2013
Sign in to view read count 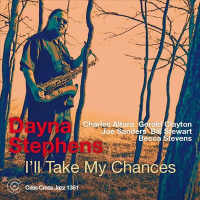 For his second Criss Cross release I'll Take My Chances, saxophonist Dayna Stephens has put together an impressive recital showing off his skill for composition, arranging, and improvisation. The ten tunes presented here are a nice mix of Stephens's originals, an Ellington classic, and original tunes from contemporary pianists Brad Mehldau and Aaron Parks. The tunes all prove to be fantastic vehicles for Stephens to showcase his warm, soulful sound, and the prowess of the group he has put together for this recording.

For the rhythm section Stephens joins pianist, Gerald Clayton, and bassist, Joe Sanders, both young players who have been attracting attention since their time at the Thelonious Monk Institute, where Stephens also studied. Drummer Bill Stewart has been a powerful presence in the New York jazz scene for twenty years now and he and Sanders seem to connect almost effortlessly on this album. Stephens completes the rhythm section with guitarist, Charles Altura, who has just recently come into the spotlight for his work on Chick Corea's The Vigil (Stretch Records, 2013).

On his original tunes Stephens shows off his talent for writing interesting melodies. "JFK International" has a winding, unpredictable melody, obviously inspired by the hustle and bustle that can always be found in the airport. Appropriately, "Field of Landmines" has a light and careful feeling to it and Stephens explores some new sounds during his solo by using a chorus pedal, adding an interesting texture to this album. The fact that Stephens's original, "I'll Take My Chances," comes directly after "Field of Landmines" may strike some listeners as humorous but the song itself sets a serious tone and sets a perfect backdrop for Stephens's rich tone.

"Dirty," another Stephens original stands out on this album and finds Gerald Clayton accompanying from the Hammond B3. Stephens does his best to live up to the tune's name with a soulful bari sax solo. For the centerpiece of the album Stephens recruited vocalist, Becca Stephens, to lend her delicate voice to his treatment of the classic Ellington tune, "Prelude to a Kiss." Though piano and guitar have a history for stepping on each other's toes in this type of a group setting, Clayton and Altura do remarkable job of complimenting each other rather than getting in each other's way on this tune.

With this album Dayna Stephens adds another credit to his growing discography and proves himself a force to be reckoned with, not only as a soloist, but also as a composer, arranger, and band-leader. The other members of his quintet interpret Stephens's music with confidence and authority and accompany him well. Hopefully we can look forward to hearing Stephens develop even more as a composer and improviser in the years to come.