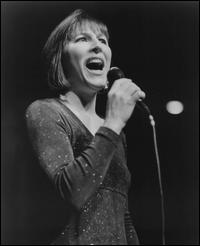 Jazz vocalist Kendra Shank has been a New Yorker for 12 years. She's quite active on the scene, frequently collaborating with pianist Frank Kimbrough. She's released several critically acclaimed albums recently, specifically Mosaic( Challenge 2009), and Spirit Free: The Abbey Lincoln Songbook (Challenge 2007). Before settling in New York, she lived in Seattle for 18 years, studying with vocalist Jay Clayton, and bassist Jeff Johnson. Originally, though, she hails from San Diego, so this performance represented a "welcome home" event.

Shank is that rare female vocalist who considers herself a musician first— in performance she positioned her voice as just another instrument in the quartet. There was no "diva" attitude in her. There was, however, the spirit of a very adventurous improviser, and this concert was chock full of the kind of risk-taking that's expected from instrumentalists. Shank was very loose with her arrangements; ready to go wherever the moment—and her West Coast collaborators—ventured.

Los Angeles has many top-flight pianists, and Bill Cunliffe is surely one of the best. Cunliffe possesses an incredible touch on the instrument; no matter what the dynamics were, his fingers seemed to dance over the keyboard. He could pound when necessary, but maintained a sense of barely touching the piano. His solos were sparkling, inventive affairs and he demonstrated a very experienced way of accompanying a singer. Shank and Cunliffe played together when he was a New Yorker, so that could explain the simpatico vibrations evident on this night.

Double-bassist Hamilton Price was a monster the whole night. This young man (all of thirty) is clearly someone to watch. He possessed all the tools: perfect intonation; big sound; and impeccable technique. He took fleet-fingered (but woody) solos, and his bag of double-stops and thumb-position hijinks were entirely satisfying. Shank chose wisely again for her drummer/hand percussionist: the ubiquitous Zach Harmon. Harmon played a modified trap kit and tabla drums simultaneously, and that would be freakish enough. But it was the quality of his playing on each instrument that made his duality so amazing to watch and hear. Still only 25 years-old, it doesn't take a Nostradamus to predict big things in this percussionist's future.

The concert began with a dark, mysterious reading of Cole Porter's "All Of You," featuring Shank's supple alto, weaving in and around the quartet's loose framework. The singer then launched into her own "Incantation," which featured some wild "lyrics" in a language that Shank created in an attempt to get beyond the familiar "scat" singing. "Incantation" basically boiled down to a duet, between Shank's vocalizations and Harmon's tablas, that became riveting as Harmon matched her beat-for-beat, idea-for-idea. That piece soon morphed into "Throw It Away," a tune with conventional lyrics. Next, the quartet felt its way through a mostly improvised performance, with the central idea being the word "blue" sung with differing pre- and post-scripting; very avant-garde, for a singer with such a mainstream reputation. The group eventually focused in on a very fresh adaptation of the 1926 Irving Berlin standard, "Blue Skies," which felt like waking up in your own bed after an intense dream about Martian abduction.

The concert continued with Frank Kimbrough's "For Duke," with lyrics by the pianist's wife. Shank sang with great conviction, wrapping her warm voice around the piquant melody on a tune that was also another chance for Cunliffe to display his greatly nuanced mastery. She counted off a "blues in B-flat" to the group; starting very free but eventually settling into "Blue Monk." Shank then announced Johnny Mercer's seldom heard "The Shining Sea," that once again had a welcome grounding effect on the audience. Shank has an affinity for the music of Abbey Lincoln, which she showcased on a poignant version of Lincoln's "Not To Worry." The highlight of the concert came next: a furiously swinging version of Victor Young's standard, "Beautiful Love," that was off the hook, and in your brain.

You've got to hand it to Shank: she's got nerve. She came into town eschewing a rehearsal because she had the innate confidence in her abilities to "wing it" and thrive. To the San Diego crowd that roared their approval, this was, indeed, a hometown girl making good.