BY JACK HUNTLEY
August 5, 2010
Sign in to view read count 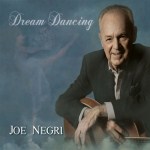 Veteran guitarist Joe Negri has nothing to prove to anyone. He's been a professional musician since the late '40s, played with a wide variety of musicians in countless musical settings, taught crops of aspiring musicians through his university positions, worked as a musical director and on-air performer for television, and weathered the ups and downs of the jazz world with his melodic, sophisticated musical style. On Dream Dancing, Negri displays his seemingly effortless chops over a set of aptly chosen standards in a swinging trio format. Negri is one of those rare musicians whose playing never ages, and who always manages to sound inspired and hip. So although he may not have to, Negri proves his salt on every track of this fine album.

While Negri's previous album, Uptown Elegance (MCG Jazz, 2004), was a master class in the big band guitar sound, Dream Dancing's energy comes from the give-and-take of the three piece format. Backed by the outstanding combo of bassist Brain Stahurski and drummer Thomas Wendt, Negri is really able to flex his improvisational muscles. His solos combine a crisp, straight-ahead feel with the occasional spice of a bluesy turn or a Latin-ish dash. Although the lineup is different, both albums share the common thread of an infectious rhythmic quality. Negri seems incapable of laying down a lackluster note—just try keeping your foot still on "I Never Knew" or "The Girl Next Door."

Another Negri signature talent is well-displayed here: his fluid, silky lines that almost create the illusion of effortless musicality. There's no doubt Negri's musical vocabulary is as hard-earned as it is extensive, but the realization of his technical prowess comes after the music washes over the ears. In his original "You Are All," Negri's brilliant solo opening has already moved by before the virtuosity of it is fully comprehended. Again, on "The Johnny Mandel Medley," Negri's artful solo-guitar intro is nearly over before, looking beyond the beauty, his true ability is displayed. By then, his fluent melding of four Mandel classics ("A Time For Love," "Emily," "Shadow Of Your Smile," and "Theme from M.A.S.H.") are transfixing. Always reliable, Stahurski and Wendt really shine on this cut as they deftly move in and out behind Negri's playing, adding an impeccable dynamic context.

Negri has spent his career working out of the musically underappreciated city of Pittsburgh, PA where he has taught at Carnegie Mellon University, Duquesne University and University of Pittsburgh, and is generally considered a local institution. It's only through the music industry's geographic shortsightedness that he is not heralded as such internationally. His exceptionally creative and technically astute playing deserves a wider audience. For those in other zip codes, Dream Dancing is an endlessly satisfying sampling of the musical sophistication that is Joe Negri.

I Never Knew; Dream Dancing; You Are All; The Girl Next Door; The Johnny Mandel Medley; La Verne Walk; You've Changed; Darn That Dream; The Touch of Your Lips.