By Jack Bowers
November 1, 2011
Sign in to view read count 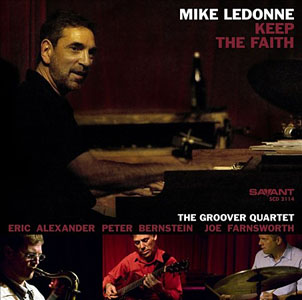 Connecticut-born / New York-based Mike LeDonne, who divides his time these days between piano and organ, has begun to record more frequently on the Hammond B3, especially with his suitably named Groover Quartet which, according to Owen Cordle's liner notes to Keep the Faith, has been together now for more than a decade. And that's a good thing, as these gentlemen certainly know how to groove, and do so with abandon on an album recorded roughly a year after the quartet's well-received The Groover (Savant 2100, 2010).

The organ trio has, of course, been a staple of small-group jazz for more than half a century, but LeDonne has expanded its range and power by adding another voice, that of the superlative tenor saxophonist Eric Alexander, who earned his spurs with organist Charles Earland's group nearly two decades ago and, since then, has risen steadily to the top rank among contemporary tenors. LeDonne and Alexander are bolstered by a brace of seasoned pros, guitarist Peter Bernstein and drummer Joe Farnsworth. On the other hand, perhaps "bolstered" isn't the proper word, as this is above all a quartet of equals, and Bernstein and Farnsworth's voices are no less decisive (or incisive) than LeDonne's or Alexander's.

Even so, it is the organ that enriches the groove, regardless of tempo, and LeDonne is impressively immersed in its tradition, echoing and saluting such eminent predecessors / role models as Earland, Jimmy Smith, Don Patterson and Jimmy McGriff, among others. LeDonne pays homage to another groove-based organist, the late Big John Patton, with "Big John," while Earland wrote the impulsive title selection. LeDonne also composed "Scratchin,'" "Burner's Idea" and "Waiting for You" (the last for his daughter, Mary) to complement "The Backstabbers," Michael Jackson's "The Way You Make Me Feel," Donny Hathaway's ballad "Someday We'll All Be Free" and Horace Silver's slow-cooked finale, "Sweet Sweetie Dee."

No matter the setting, Alexander is always a pleasure to hear, while Bernstein affirms on every solo that the blues are in his soul. As for Farnsworth, he does what drummers do best, and that means keeping immaculate time and making sure his teammates are always in the spotlight. LeDonne, for his part, solos with enthusiasm and intelligence and comps the same way. Keep the Faith embodies another persuasive hour of well-grooved jazz by LeDonne's admirable quartet.

The Backstabbers; Keep the Faith; Big John; The Way You Make Me Feel; Someday We'll All Be Free; Scratchin'; Waiting for You; Burner's Idea; Sweet Sweetie Dee.