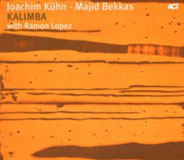 Like the spectacular bouffant hairstyle he's sported since the 1970s, pianist Joachim Kuhn's music is at home in two, generally discrete traditions: intellectually rigorous, harmonically complex, longhair conservatoire music and a less cerebral strand of world jazz driven by vamps and grooves. Sometimes Kuhn keeps the two traditions apart—as on his classically oriented solo albums—at other times, as on Kalimba, he brings them together, in a sort of modal chromaticism, to their mutual advantage.

It's tempting, though probably simplistic, to trace Kuhn's musical bipolarity through his domiciles. He was born in Leipzig, Germany in 1944, and, something of a child prodigy, first performed as a concert pianist in the grim authoritarian atmosphere of post-war East Germany. He began playing jazz only in his late teens. After periods in the USA and France, he now lives on the Mediterranean island of Ibiza, a one-stop holiday destination of choice for European hippies since the late 1960s, and for centuries a crossroads for Andalucian and Moroccan culture.

Spanish and Moroccan influences are at the forefront of Kalimba. Kuhn shares headline billing with the Moroccan guimbri and oud player Majid Bekkas, who wrote or co-wrote six of the ten tunes and whose rolling, primal ostinatos anchor the rhythms to a broad Magrebi foundation. A percussive, 3- or 4-string bass lute, closely related to the West African ngoni, the guimbri is a core instrument in Moroccan trance music, part melody-carrier and part beat-machine. Bekkas plays the guimbri on most tracks, and when he switches to the multi-stringed oud plays it in similarly earthy fashion. His vocals on his own compositions may not be to all tastes, but they have the merit of brevity. The third player is the Spanish drummer, Ramon Lopez, a lively and inventive musician whose drum kit includes Indian tablas and West African rattles and shakers.

Despite the eloquent contributions of Bekkas and Lopez, Kalimba is ultimately Kuhn's album, and his advanced grasp of harmony brings to it an edge of abstraction and astringency lacking from more typically pentatonic world jazz. There are unexpected twists and turns in even his most basic riffs and changes, and from time to time he uses the sudden, startling shifts of pace and rhythm which are signature aspects of his solo music—shifts which the nimble Bekkas and Lopez follow with élan.

A sunny, uplifting and absorbing album. If you enjoy it, you should also try to hear Europeana (Jazzphony No.1) (ACT, 2006), in which Kuhn brings a similar grit-in-the-machine aesthetic to a collection of European folk songs arranged for jazz orchestra by British composer Michael Gibbs.