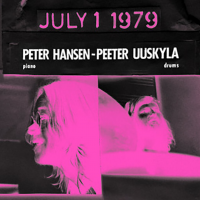 The year was 1979. Sid Vicious of the Sex Pistols died, so did jazz legend Charles Mingus. While punk rock was in a duel with disco, jazz as commercial music was dying the death of a thousand cuts. Miles Davis was in hiding, as jazz fusion (the disco equivalent in jazz) was forcing the retirement of traditionalists. What survived, probably for its lack of money-oriented motives, was free jazz. Born of the fires lit by Albert Ayler, Ornette Coleman, and Pharoah Sanders, free jazz spread worldwide, albeit in the same manner punk bands like Black Flag propagated their music, playing for small but devoted crowds.

This free music had caught fire in the UK, Europe, and Scandinavia. Artists such as Derek Bailey, Peter Brötzmann and Bengt Nordstrom created a sound that thrived and actually fueled the renaissance of free jazz in America back in the late-80s. This document JULY 1, 1979 is a recording of Peter Hansen & Peeter Uuskyla, the opening act for Pharoah Sanders' in Götebord, Sweden. Pianist Peter Hansen was 21 and had been practicing under the watchful eye of drummer Peeter Uuskyla, who is probably best known as for his recordings with Brötzmann, Nordström, and Cecil Taylor.

The forty minutes of music are a continuous set split between the two sides of the LP, which was issued as a limited edition of 300 copies or a digital download. Hansen and Uuskyla uphold the custom of the times (both free jazz and punk) with unvarnished raw energy. Think Cecil Taylor and Sunny Murray or Alexander von Schlippenbach and Sven-Åke Johansson. The energy is nearly unrelenting. Whether Hansen is pouncing on his keyboard or Uuskyla is carpet bombing from his kit, the sound is visceral and physical. Like punk rock, with free jazz there is a visual component that is missing from any audio recording. Fans are required to utilize their imaginations. And it is made easier here by the energy of the sound, which comes at your ears in waves. Towards the end of "July 1, 1979 Part 1," the pair quieten and fragments of Thelonious Monk's "Well, You Needn't" are heard, as are many other buried treasures. All now available for the finding.