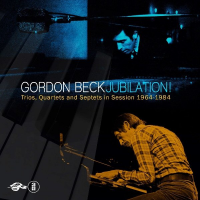 For this 3 CD box set, the estate of Gordon Beck, who died on 6 November 2011 aged 76, granted access to Beck's collection of analogue tapes of live and some studio performances. None of these recordings has ever been previously released. Beck was indubitably one of Britain's finest jazz pianists. He recorded on three key Tubby Hayes albums, 100% Proof and two live albums, Late Spot At Scott's and Down In The Village, considered by many to be Hayes's finest works. He also recorded with guitarist Allan Holdsworth and joined saxophonist Phil Woods in the European Rhythm Machine and recorded with Ian Carr's Nucleus on Belladonna and Labyrinth. Amongst albums recorded under his own name, his debut, Experiments With Pops with John McLaughlin, Jeff Clyne and Tony Oxley, is a highly sought-after cult classic. This was followed by two movie-themed trio albums for Major Minor and the highly acclaimed Gyroscope (with Clyne and Oxley) and a notable 1991 recording and paean to his hero Bill Evans, For Evans Sake, with Jack DeJohnette, Dave Holland and Didier Lockwood.

One of the most significant aspects of this compilation is the inclusion of recordings with Oxley, here playing "straight" drums, but any opportunity to hear Oxley, a leading exponent of the free movement and former drummer with Cecil Taylor's trio, is welcome. It's hardly surprising that he was voted top British jazz drummer for four years running in the Melody Maker polls (1968-1971). Listen to Oxley's playing on the dynamic "Headin' On Out." But another bonus of this compilation is the chance to hear bassists Ron Mathewson and Jeff Clyne, both superb masters of their instrument.

CD 1contains four sessions from 1964 and 1966 with Beck's trio, including Jeff Clyne and Johnny Butts, who died tragically in 1966 aged just 25. The recording quality is excellent with scintillating drumming from Butts (exemplified by his break on Beck's composition "Virgo"). There are some standards too, such as "Speak Low" and "Airegin," with Beck himself sounding every bit a virtuoso, his playing assured and high-powered. The following five tracks, recorded in 1968, all Beck originals, feature Tony Oxley on drums and Clyne on bass. On "Miss T. Flying," from the album Gyroscope, Oxley can be heard on spectacular form. Beck's semi-free "Suite Number One," with Oxley and Clyne holding down a tight rhythm section, demonstrates Beck's sheer compositional inventiveness. The final three tracks on the first CD dated 1972, feature Beck's septet comprising the cream of British jazz at that time, including the inestimable Kenny Wheeler, who gives a typically soaring solo on "Reaching For The Stars And Further Still." The tentative "Prelude" gives way to its segued partner, "Tying Up The Loose Ends," with a catchy ascending riff and Mike Gibbs-like arrangements. Beck is heard here on electric piano.

The first four tracks on CD 2 feature MOB, a collective acronym standing for Mathewson, Oxley and Beck. Recorded in 1975, these spectacular takes capture one of Britain's best but least recorded piano trios in full flight. The relatively straightforward "Little D" gives way to the more complex "The Curtain"; Mathewson here executes a short virtuosic pizzicato solo demonstrating how ineffably good this talented bassist was. "Suite: Bits & Pieces" follows, a lengthy solo studio recording, with Beck on tintinnabulating electric piano with pronounced and hypnotic stereo effects. During the 25 minutes he also double-tracks variously on acoustic piano and bamboo flute. The final track on this disc again features MOB. Dated as sometime in the mid-70s, this is an untitled 30 minute improvisation which includes "Blue In Green." The recording quality on this track isn't of the highest, and with audience chatter audible at times, it was probably captured on a domestic tape recorder. Nonetheless it still manages to convey Beck's super-dextrous playing and the electric atmosphere generated by this trio.

Four solo tracks open CD 3, beginning with "Box You Fight Him He Cry Out." They evince a lyrical fluency and speed which is often breathtaking, though thirty minutes of unremitting electric piano does wear the listener down a little. It's not that the music isn't brilliant, but the instrument Beck used (possibly a Hohner) had an unforgiving jangly timbre. Nevertheless, these four pieces are all good examples of Beck's technical panache, particularly the last take "Here Comes The Mallet Man." These live tracks are followed by six quartet numbers. The first four are with Stan Sulzmann, Mick Hutton, Steve Argüelles plus guest Frank Ricotti and begin with Beck's elegant "November Song." Recorded live eight years after the four previous tracks, Beck is in great form. Particularly noticeable is his incendiary playing on the aptly titled "The Quick Brown Fox." The final two undated cuts feature Beck accompanied by an unnamed trio with flute on the first and saxophone on the final plus bass and drums tracks.

The box set is accompanied by a thirty five page booklet crammed full of photographs and informative background liner notes written by saxophonist Simon Spillett and packed with Beck memorabilia supplied by Spillett and author Colin Harper. This very welcome collection represents an important slice of British jazz history that has up until now gone unrevealed. Beck was a remarkable musician and composer who never quite received the recognition he deserved, and this release will no doubt go a long way towards redressing this oversight.