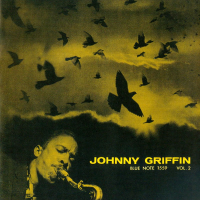 Sometimes dumb luck makes all the difference. That's the case with Johnny Griffin's A Blowin' Session.

If you're a sax fan, this one's for you—not one, not two, but three red-hot tenors, plus one scorching trumpet, and the legendary Art Blakey smashing the drums behind them. Three tenors? How did that happen? Pure serendipity.

Johnny Griffin, the young, new, super-fast saxman, was on his way to record at Rudy Van Gelder's studio in New Jersey one day in 1957 when he ran into John Coltrane. Come along, Griffin suggested. Sure, Coltrane replied. Dumb luck.

The result is the aptly titled A Blowin' Session. No false advertising there. Coltrane and Griffin are the stars, blowing long, complex, passages at supersonic speed. Trumpeter Lee Morgan—soon to be a Blue Note mainstay—keeps pace with his own exciting solos. The third tenor, Hank Mobley, also soon to be a Blue Note regular, has a slightly different sound—definitely bop, but slightly more relaxed and bluesy.

There's a rhythm section, of course, but outside of Blakey, they hardly feature. Pianist Wynton Kelly and bassist Paul Chambers are barely heard. Blakey, naturally, is the frantic, inventive timekeeper.

There's not a lot of variety here —just four tunes, two of them Jerome Kern chestnuts and two originals by Griffin, plus one alternate take. So five cuts in all, though each is around 10 minutes long. Which means each hornman is given plenty of time to stretch out, try out ideas and just plain blow.

Track 1, the Kern standard "The Way You Look Tonight," is the scorcher, taken faster than possibly any other bop recording in history. Only Mobley seems straining to keep up. The rest are mid-tempo tunes that offer suitable chord changes for inspired soloing.

It's a pretty terrific CD. Would it have been half as good without Coltrane? Probably. Griffin, Morgan, Mobley and Blakey are more than talented enough to hold your attention. But it's nice to have the fourth horn voice, though honestly, Coltrane here doesn't sound SO different from Griffin that you'd sit up and say, "Oh, well, there's Trane!"

A few months later, Coltrane would record his one and only album for Blue Note: the classic Blue Train. Morgan and Chambers would be there for that one, too. A Blowin' Session isn't quite on that level, but it's still a pretty good showcase for four very frantic horn-players.