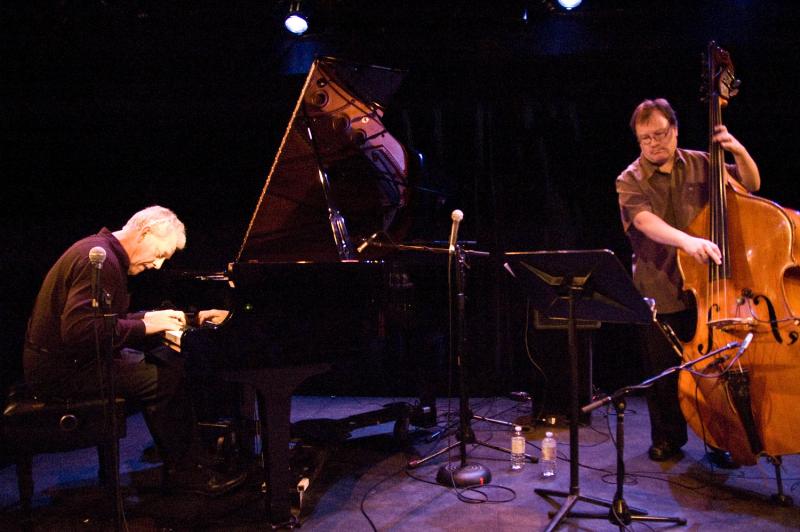 BY JOHN KELMAN
October 16, 2010
Sign in to view read count
John Taylor/John Geggie
National Arts Centre Fourth Stage
Ottawa, Canada
October 9, 2010
After an impressive start to its 2010 Fall/Winter Series, the TD Ottawa International Jazz Festival kept the momentum up by bringing another of modern jazz's finest pianists to town, less than a week after Chick Corea and his latest trio, with bassist Christian McBride and drummer Brian Blade, delivered a well-received show at Dominion Chalmers Church the previous Sunday. John Taylor so rarely makes it to North America that husband and wife Josh and Min Rager—both fine pianists in their own rights—not only caught Taylor in their hometown of Montreal the past three days for workshops at McGill University, but drove 200 kilometer to Ottawa, to hear the renowned British pianist in an intimate duet with John Geggie. Josh Rager performed with Geggie nearly a year ago, as part of the local bassist's annual Geggie Concert Series, and so he knows Geggie's playing well, and was consequently as astute a judge of the show as any.
And he was clearly enjoying the show, which focused heavily on music by Taylor and his longtime musical collaborator, trumpeter Kenny Wheeler, with a couple of standards and one Geggie composition thrown in for good measure. It was, in fact, Wheeler who was supposed to be in Canada, to work with Canadian saxophonist Phil Dwyer. But circumstances prevented the iconic expat Canadian trumpeter from making the trek to Canada this time around, and so Taylor came in his place (I'll be Kenny for a short bit, then," said Taylor when he explained the genesis of the show to an appreciative audience). When Dwyer, a friend of Geggie's, suggested Taylor also make a stop in Ottawa, the bassist contacted the Ottawa Jazz Festival's Executive Producer, Catherine O'Grady, and she moved quickly to add the show to the festival's Fall/Winter series, the whole event coming together in a matter of a couple weeks.

It was a good call on O'Grady's part, since Geggie—a fixture (and treasure) on the Ottawa scene for many years, between his own series and running the jam sessions during the festival—was truly the only bassist in town with the chops, reading skills and sheer confidence to jump into a situation where the only rehearsal took place at the sound check. Improvisationally open-minded and, even more critically, open-eared, perhaps the most impressive example of how well-suited Geggie was for the gig came in the encore, where he navigated a medley of two Taylor tunes from the pianist's recent solo album, Phases (Cam Jazz, 2009): the dark-hued "Ritual"; and similarly brooding, but thematically knotty "Frolics." "Ritual" can also be heard on Blissful Ignorance (Hecca, 2010), a Norwegian release featuring the new collaborative trio Meadow—with Taylor, saxophonist Tore Brunborg and percussionist Thomas Strønen—scheduled for international release by Edition Records in 2011. Geggie managed the medley's serpentine melody with aplomb; Taylor sending an encouraging smile his way at the medley's end. 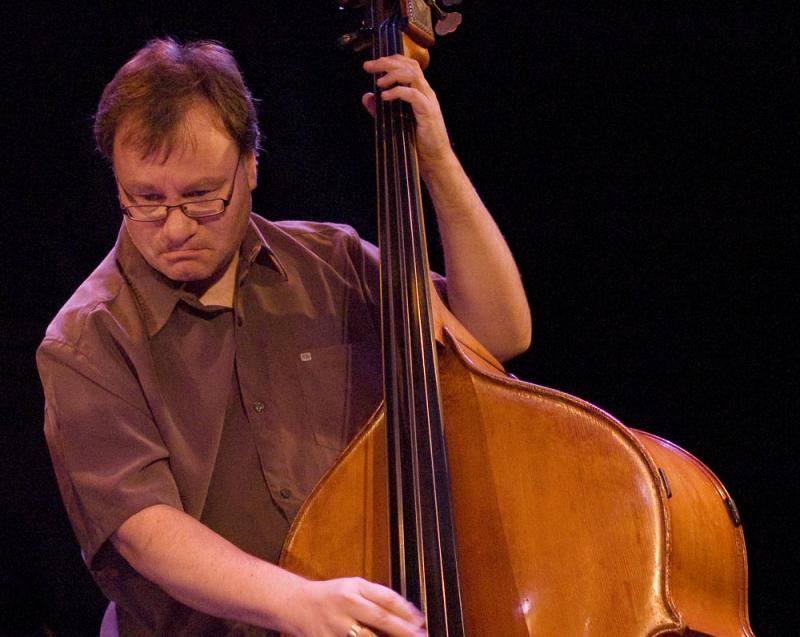 But more than mere reading skills, Geggie—whose past couple years have represented a period of artistic growth and increased confidence, with the almost back-to-back releases of Across the Sky (Plunge, 2010) and Geggie Project (Ambiances Magnetiques, 2010)—displayed an important ability to communicate with Taylor at a deep level from the get-go, not to mention turning in some fine solos, both pizzicato and arco, that drew rounds of appreciative applause. An early arco solo, during the second tune of the first of two sets—Taylor's indigo and lyrical "Windfall," dating back to Départ (ECM, 1980), where the pianist's regular Azimuth trio (with Wheeler and vocalist Norma Winstone) was augmented by guitarist Ralph Towner—was as impressive for what the bassist didn't play as for what he did. It was only after Geggie mined the harmonic range of a single note—through meticulous bowing and creating delicate tension—that he moved on, for a gentle release that showed his strength at combining lithe dexterity with a firm sense of construction.

Taylor was, as ever, eminently creative, and harmonically sophisticated, while remaining approachable with motifs that seemed to flow endlessly, each one explored and expanded upon, before using it as a bridge to the next. Opening the first set with an often-played Wheeler tune, "Everybody's Song But My Own" (or, as Taylor humorously quipped in his introduction towards the end of the set with respect to publishing nightmares, "Everybody Owns the Song But Me"), Taylor quickly demonstrated why he is, perhaps, the most important torch-bearer for the late Bill Evans' tradition, even while forwarding a voice that, over the past 50 years, has become nobody's but his own.

While Taylor's reputation has, thankfully, been on a well-deserved upward trajectory the past decade or so, he still remains far less of a household name amongst jazz fans, when compared to younger players like Brad Mehldau and Jason Moran—both fine players, but who seem to garner considerably more press. When the history books are written about this particular time in the evolution of jazz, Taylor deserves to be up there with the others, as a pianist who's an 88-key equivalent of guitarist John Abercrombie in his ability to approach the same material with a fresh slant, free of predictable patterns, each and every night.

Taylor and Geggie worked their way through other material from Wheeler, including "Mark Time," first heard in a medley on the trumpeter's Double, Double You (ECM, 1984) and the atypical first set closer, Wheeler's "Sly Eyes," from the trumpeter's 2001 EGEA collaboration with Taylor and clarinetist Gabriele Mirabassi. The second set was more diverse compositionally, though there were still two Taylor tunes: the bright, propulsive "Ambleside," also from Moon, and Insight, a hard-to-get 2003 solo piano outing on the now-defunct Sketch Records label from France; and "Between Moons," a melody-rich tune that, in addition to appearing on Insight, was also released on another overlooked Sketch title, Overnight, featuring Wheeler and bassist Ricardo del Fra. 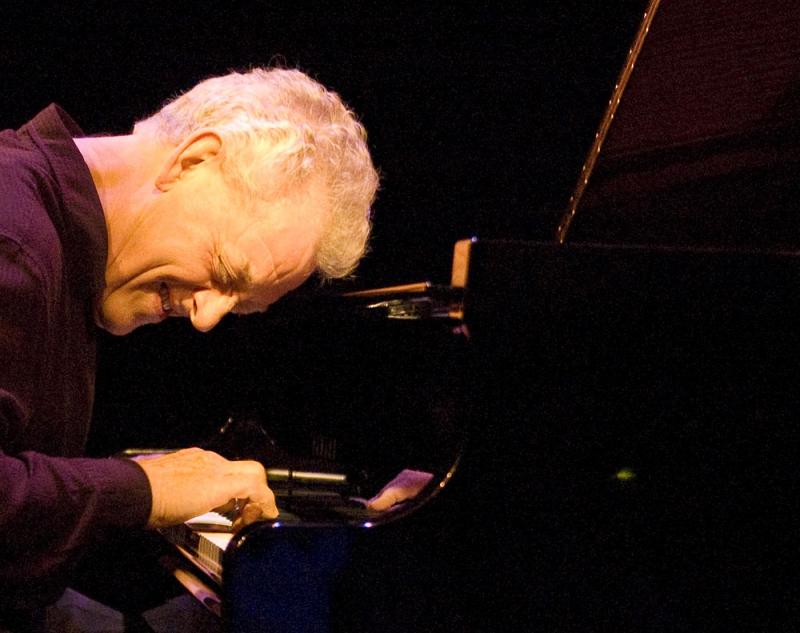 Geggie's "Unsaid"—a relatively recent composition—provided stylistic contrast, while the well-heeled standard, "How Deep is the Ocean," was clear evidence that the spirit of Bill Evans remains fundamental to Taylor's still-personal style. A Ralph Towner piece from Taylor's trio date with the guitarist and Italian singer Maria Pia DeVito, was particularly revealing, as Towner's approach to voicings is so definitive that it feels a little odd to hear his writing reinterpreted with such a different slant, but Taylor and Geggie made "Tramonto" their own, as they did the entire evening.

It was a "seat of your pants" date, one that came together almost impossibly fast. But Taylor's combination of complex harmony and acute lyricism, coupled with Geggie's ever-present flexibility—and the chemistry that continued to creep into the set, strengthening with each successive tune—made it an intimate performance that all who attended will remember...and those who hear about it after the fact will, almost certainly, regret having missed.