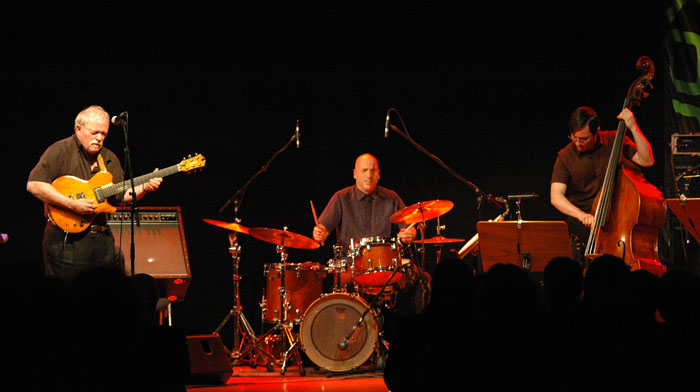 Over the last 40 years, John Abercrombie has earned his spot among the pantheon of jazz guitarists. His liquid tone, mercurial ideas and quicksilver phrasing make him instantly identifiable in just a few notes. His sound, his voice on the instrument—no matter the context or collaborators, is radiant and personal. Having last appeared in San Diego in 1978 as a member of Jack DeJohnette's "New Directions" band, Friday night's performance was anticipated with enthusiasm from those who remembered.

He appeared at the swanky jazz supper-club Anthology with his working band: on violin, the full-toned Mark Feldman who has shared his stages for years now; likewise—the ubiquitous drum virtuoso Joey Baron. The relative newcomer was double-bassist Thomas Morgan, who replaced long-time associate Marc Johnson. These guys have developed their own singular improvising language through many gigs and the band's aesthetic is built on taking chances and responding in the moment.

In that spirit, Friday's concert began with a long, organic, and at times meandering piece that evolved slowly and captured many moods. Abercrombie's solo began quietly—he explored several ideas before the pace intensified and he ended with just a touch of grainy distortion—the piece then morphed into something entirely different and after some exchanges with Feldman, he started a new solo that hinted at further chromatic ideas that started to swing with occasional bluesy interjections. Feldman then took over—and the first thing you notice about him is his thick centered tone. It seems very classical in nature. Feldman is another patient soloist, he built his clear and concise series of ideas one after another until he gradually arrived at a climax— then receded as quietly as he began. Twenty minutes after it started it was over. Abercrombie then announced that the first piece was titled, "Excuse," as in "excuse to warm-up." That got the crowd chuckling, something they would do several times when Abercrombie's self-deprecating wit came out.

The next piece began with the double-bass staking out an ostinato while Baron played groove-oriented patterns with his hands on the drum skins. Slowly there emerged just a hint of rhythmic unison and Abercrombie opened with a quote from the Dizzy Gillespie classic, "Salt Peanuts." The piece never quite got to where it might have been going, though.

For the third tune, Abercrombie pulled out an original from the ECM disc, Third Quartet called, "Wishing Bell." Now, the group was finally committed to an actual groove—a light bossa-nova feel. Abercrombie's solo was meaty and intricate and filled with his trademark serpentine phrasing. Feldman was next and his ideas seemed to grow in strength as he ran through stair-stepping sequences of chord-toned ideas.

The next piece, "A Nice Idea" unfolded with Abercrombie laying out a neat modal vamp utilizing chords built on fourths a la McCoy Tyner. This guitar solo was appropriately pianistic in nature, alternating between lean legato single-notes and tasteful voice- leading—along with occasional outbursts of the blues. Feldman seemed to come alive for this opportunity, he started with more force than ever, and quickly worked up to a frenzied crescendo, his bow movements starting to blur. Thomas Morgan got his first real chance to contribute, and with the band's excellent control over dynamics (they were at whisper level) he could finally be heard. He didn't waste his turn—delivering an excellent, logical solo that built from the lower registers all the way through to piquant stabs into cello-range. It was a shame that you couldn't hear him so clearly in the ensemble passages.

At this point, Abercrombie carried on with Morgan and Baron in trio mode with the always welcome jazz standard, "The Days Of Wine And Roses." This was one of the first tunes he learned as a student in the sixties, and his familiarity with it's form was obvious by the many chances he took harmonically. Although it started rather quietly, with the bass playing in "2" and Baron on brushes, within a few minutes the volume and intensity ratcheted up considerably—by the time Morgan began playing in "4" — Abercrombie was at full volume and strutting through the changes with a confident swagger that made it a highlight moment. Abercrombie's story was not constrained by the changes—rather he bent them to his own personal will. Very impressive.

After more than an hour of slowly building explorations, the Abercrombie Quartet had reached a point where all the gears were meshing and their engine finely tuned. It was in this space that the highlights piled up. The quartet tore into a wild version of the Ornette Coleman gem, "Round Trip." With the "training-wheels" finally off—Abercrombie became a daredevil—unleashing a powerful commentary that featured wide-interval leaps, ever increasing chromatic sequences— all with an unconventional sense of swing worthy of it's author. The group engaged in several episodes of wide dynamics— shifting from roar to whisper and back again. Feldman's solo was his most daring yet— full of powerful harmonic glissandos, trills and swoops.

It was almost all over at that point, (Abercrombie had agreed to finish by 9:00 p.m. as Anthology had a second concert scheduled that evening) . Backstage he obtained "permission" from the management to play an encore, much to the delight of the audience.

He returned to the stage and referenced another original: "Class Trip" from the ECM album of the same name. This one was a killer—easily the best tune from his own pen that night. "Class Trip" alternated between an exaggerated, almost tango-like Latin groove and pure swing. Joey Baron cracked the audience up with some Han Bennick type moves on the Latin sections— Abercrombie and Feldman turned in their best spots of the night. Later, the leader lamented, that they were just getting warmed up! Long sigh...