Advertise
411
From Far and Wide 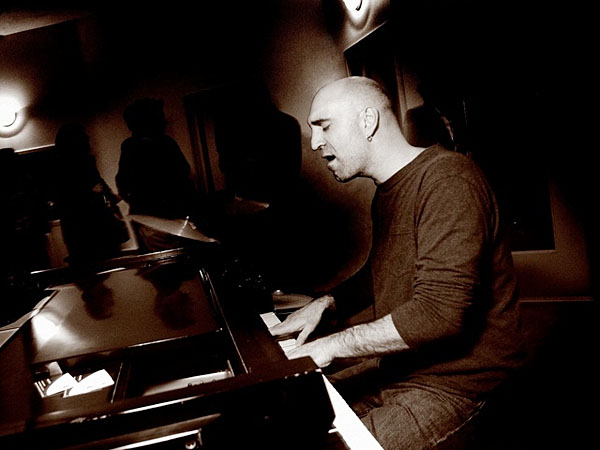 By Pascal-Denis Lussier
October 17, 2010
Sign in to view read count
Initially, I was disappointed to find out that pianist Steve Amirault was taking this new direction. Jazz singers have never really been my thing. Anyone that knows me knows I have a penchant for the lyric-less stuff—music that breaks all bounds, and language tends to impose extreme restrictions. Nonetheless, despite my own usual preferences, I'm always drawn towards good, honest, original music; good will always be good. And then there's great: music that, no matter the style or genre, draws me completely outside of my own personal tastes and/or comfort zone. In comes Steve Amirault, doing his new thing.

Jazz aficionados are, no doubt, familiar with the name. Acadian-born/now Montreal-based Amirault has forged a solid reputation as a pianist and composer, his playing and recordings garnering high praise and due attention. The list of prizes and honors he's received is long and impressive, his award-winning fourth album, Breath (Effendi, 2005), heralded by many as the best Canadian recording to come out of that year. Further, Amirault is increasingly in high demand; he continually collaborates and appears on albums by the likes of Remi Bolduc, Fraser Hollins, François Carrier, and Christine Jensen—the saxophonist/composer/bandleader up for two Felix awards this year for Treelines (Justin Time Records, 2010), including best jazz album, on which Amirault plays. He has also played with some of Canada's best musicians, having equally shared the stage with a truly imposing roster of international performers, including ECM legend Jon Christensen, who has also played with Keith Jarrett. Perhaps a few notches below the incomparable Oscar Peterson, but he's definitely in the same league as Oliver Jones and Paul Bley and, as such, proof that Montreal is still a truly wonderful place for extremely high-caliber pianists.

For those unfamiliar with Amirault, the pianist, extreme fluidity is the best way to describe his playing, which is anything but simple or clichéd yet remains wholly accessible; the melodic lines are rarely blurred in the face of deep explorative moments and unpretentious ornaments deftly placed in between unmistakable guideposts. Despite the clear Jarrett moments (including a few grunts, moans, and the occasional vocalizations) that seem to leap out of his music, his individual comping style and rolling expressiveness doesn't make him an imitator of sorts. Amirault makes use of the full keyboard; limited but well-placed trills; and an array of compositional and playing techniques, drawing from personal experience and "the now," to truly give his music his own personal flavor.

And yet, as if being at the top of his game wasn't enough, Amirault decided to add singing to his own repertoire, hence the two voices. A bold, risky move? After all, "a new challenge," is one of the reasons Amirault offered me for wanting to sing.

I had a chance to hear him live, without his new trio—just him and his piano—at Montreal's quaint Upstairs Jazz Bar and Grill on Tuesday, October 5th, where he performed a few standards, personalized pop tunes, and some of his own new compositions from his upcoming album. The Steve Amirault I now saw and heard, compared to the one from a while back when he was still testing waters, singing the occasional song, had a strong presence, radiating comfort and confidence; nowadays, he can easily fool anyone into thinking that he's been singing his entire life in spite of the fact that it's something he's taken seriously since 2007 only. In fact, one of the first things a beaming Amirault said to me when we met after the first set was: "So yeah... that's my new thing."

His style? "It's not really jazz," Amirault explained, "I like to say I make really complicated pop."

Amirault sang for a public in his younger years—that night he introduced a reharmonized version of "Memories" as a song he loved to sing in his teens (who would have thought?)—moreover he states having always been possessed by an interest towards writing, already having provided lyrics for Christine Jensen, Fraser Hollins, John Labelle, Joel Miller, and his brother, Greg Amirault, but choosing to add "singer" to his "pianist, composer/songwriter" credentials some twenty odd years later was the result of an epiphanic moment of sorts.

"When my mother died, I felt a need to express more than I felt I could with piano. That event prompted me to focus on writing a few pieces with the thought that others would sing them. Then, one time, I was in the studio and sang one to get a feel for its sound and when I played it back I sorta said to myself: Hey! maybe I can sing these. It just all of a sudden seemed to make sense to me, even more so due to their content, that I should be the one singing them."

A perfectionist and dedicated artist, Amirault didn't suddenly fancy himself a singer. "I started to take singing lessons to learn and develop the tools of the trade; pitch and how to control my voice, my diaphragm, breathing and so on."

Through no fault of his own, Amirault seems to possess a limited range, his rich voice rarely varying by more than one octave, but he more than makes up for this limitation at all other levels, from song choices to lyrical and compositional considerations. His songs have an indescribable standards feel to them; they are as personal and heartfelt as his arrangements and execution, the three fitting together like warm, apple, and pie. And anyway, his music has never been bold and brash despite the grand existential themes that fuel his inspiration; it's always been about the subtle, comfort-carrying pleasures of life, even when he reflects on its sadder sides. His bluesy yet hope-filled ballad, "Je vois Clémente Danser," (which originally appeared without lyrics on Breath) a song he wrote in memory of his deceased grandmother, is a testament to this.

The new album will continue to explore such majestic themes, but, based on "Perfect World," "One Existence," "Now That You're Here," and "Clémente," Amirault continues to do so by affirming beauty and goodness in all things, not by focusing on the bad.

The launch for Amirault's fifth album, and the official launch of his new direction, is planned for the summer of 2011. The disk will be called One Existence—also a song on his third album, Rendezvous Point (Effendi, 2000), which he revisits here.

The trio has been in the studio and the songs are recorded. Accompanying Amirault, and forming his new trio—another warm apple pie affair—are bassist Rémi-Jean Leblanc and drummer Samuel Joly, both bringing their high talent and personal voices. Though I've only heard a couple of tracks from this trio, the three appear to perfectly and seamlessly complement each other so that, in typical Amirault fashion, nothing ever needs to be overstated.

The album—an independent release—will feature original Steve Amirault compositions and lyrics, two of which are in French. Personally, I think Amirault should sing more songs in French. His slight Acadian accent (he was born in Nova Scotia to Acadian-French speaking parents) and the smoother, more fixed prosodic tones of French seem to give him a truly unique folk spice not present when he sings in English. It's no coincidence that the second French song is called, "Poème aux Acadiens" ("Poem to Acadians").

Back to my initial disappointment... It had everything to do with me and nothing to do with Amirault's singing abilities. Great is great! His "new thing" is a welcomed addition.