Pianist Oliver Jones is one of Canada’s finest musicians. His career also intertwines with the proud history of jazz in his native Montreal, the thriving city that in its heyday also produced the late Oscar Peterson, Oliver’s lifelong friend and one of his influences.

Oliver was born and raised in Saint Henri, a predominantly working class area of Montreal, several blocks from Peterson, and young Oliver would sit on the Peterson porch, listening to the older boy practice. Oscar’s sister, Daisy Peterson Sweeney, became his first piano teacher, with lessons continuing for the next twelve years. These lessons solidified young Jones’ skills, which were already considerable; Oliver was performing publicly at age five, and by the time he had his first nightclub appearance, he was nine.

Oliver Jones’ six-decade musical career has been rich and varied. His classical music education was followed by stints at Montreal’s Café St-Michel, enthralling patrons with his acrobatic piano stunts. From his teens to his early twenties, Jones could play anything from swing to rock-n-roll; in those days playing jazz was not considered a viable career.

This diverse training proved invaluable when, in 1964, the opportunity to become musical director and pianist for Jamaican singer Kenny Hamilton presented itself. Jones, with his wife and young son in tow, moved to Puerto Rico and continued with the Hamilton band for the next sixteen years. While popular music may have taken care of his practical needs, it did not satisfy his artistic cravings. While touring with Hamilton, Jones would take every opportunity to check out local jazz clubs and to participate with other like-minded musicians.

In 1980, Oliver Jones returned to Montreal, determined to pursue jazz professionally. He started by working regularly at Biddle’s, the now-closed downtown jazz club run by bassist Charlie Biddle. Three years later, after a fortuitous meeting with Justin Time Records founder Jim West, Jones’ dream came true. “There was a lot of hullabaloo surrounding Charlie and myself. Anything pertaining to jazz, we were asked to do. I’d made my first recording. Truthfully, I was in a state of shock, because when you dream something for 30 years…” Justin Time Records' very first recording would be Oliver Jones with Charlie Biddles, called Live At Biddles, and it was also Jones' first ever recording as leader.

Oliver Jones’ association with Justin Time has produced an impressive catalogue of recordings whose sidemen are among the very finest in jazz. Have Fingers, Will Travel (1997) featured bass legend Ray Brown and drummer Jeff Hamilton. Recorded at Capitol Studios, Los Angeles, this great trio session features such songs as “Street Of Dreams”, “If I Were A Bell” and “My Romance”. From Lush to Lively (1995) demonstrated Jones' unrivalled position as one of Canada's greatest gifts to the piano, in a big band setting. The recording showcased Oliver's unmistakable finesse: lightning-fast technique, solid articulation, powerful lyricism and rollicking rhythms. Then And Now is a charming session, with the late bassist Skip Bey, consisting of recordings made in 1986 and 2002, and Just In Time captured Oliver in a live setting, with Dave Young and Norm Villeneuve, at the Montreal Bistro.

Yuletide Swing (1994) was an excellent seasonal recording, winning Oliver a Félix (Québec's “Grammy” awards) for best jazz recording. Familiar favorites are revitalized with Jones' usual flair. Oliver's second solo recording, Just 88, was recorded in New Orleans in 1993, and features sparkling versions of such gems as “I'm Getting Sentimental Over You” and “Willow Weep For Me,” as well as Jones originals “Blues For Laurentian U” and “Dizzy-Nest;” it too was awarded a Félix. A Class Act (1991) featured longtime Oscar Peterson alumnus Ed Thigpen on drums and bassist Steve Wallace, and boasted a classic jazz trio sound. The recording also features memorable versions of “Very Early” and “Hymn To Freedom.” Trumpet legend Clark Terry added his magic to Just Friends, a 1990 session later awarded a Juno Award (”Jazz Recording of the Year”).

Oliver Jones’ inspiration is not confined to the artistic community. He’s also the proud recipient of the Martin Luther King Jr. award, celebrating his contributions to the Black Community in Canada and in his native Montreal. In 1993 he received the Order of Québec, the province’s highest honour, and the next year he was awarded the Order of Canada, for “outstanding achievement in the arts.” That same year, at the invitation of the Government of Canada, Jones toured several cities in China with bassist Dave Young and drummer Barry Elmes.

A regular performer at the Festival International de Jazz de Montréal, Oliver has frequently been asked to officially open the festival and has on more than one occasion been part of the closing gala. “I think the exposure I had at the Montreal Jazz Festival was really the key to the world hearing Oliver Jones,” says the artist who made his most recent appearance at the Festival together with Oscar Peterson, the two duetting publicly for the first time, in front of a sold-our audience at Montreal’s Place Des Arts.

While still semi-retired from public performance, Jones visited the recording studio with singer Ranee Lee to produce their album, Just You, Just Me. The two are co-leaders on the quartet recording, rounded out by contributions from drummer Dave Laing and bassist Éric Lagacé. The album was released to great acclaim in June, 2005, and won the Toronto Urban Music Award for Best Jazz Recording in November 2005.

In the fall of 2005, Oliver entered the studio, this time with stalwart bassist Dave Young and young powerhouse drummer Jim Doxas. The recording, released in June 2006, also featured horns on several tracks. The addition of trumpet sensation Ingrid Jensen and rising tenor sax star Chet Doxas made the session an entirely Canadian affair, and it should also be noted that Jones, ever a champion of up and coming Canadian talent, has made good on his promise by hiring some of its finest examples.

Perhaps alluding to his reemergence on the concert front and the recording studio, after his brief but much-publicized retirement, Oliver chose to name the opus One More Time. It’s one of his best recordings to date, in a career filled with superlative achievements.

Released in October, 2009, Pleased To Meet You is a duo piano recording with the legendary Hank Jones, (sadly Hank Jones passed away in May 2010). The recording also features new Justin Time signing, bassist Brandi Disterheft as well as Jim Doxas on drums. Taking the recent passing of their mutual friend Oscar Peterson as a point of departure, the men pay homage to the late master.

Oliver's 2011 release Live In Baden Switzerland was recorded live in the spring of 1990 at the Kurtheater, a lovely intimate venue in the heart of a charming town in Baden, Switzerland, not very far from Zurich. It has been the location for many of Arild Widerøe's Jazz in der Aula concerts, a well-known series that dates all the way back to 1964. Widerøe has presented the biggest names in jazz, such as Ben Webster, Earl Hines, Benny Carter, Herbie Hancock, Buck Clayton and so on. On this occasion the series’ event was 'Piano Night,' and, appropriately, Montreal’s Oliver Jones was making his Baden debut.

Accompanied by solid American bassist Reggie Johnson and the creative and observant drummer, Ed Thigpen, Oliver presented a wide-ranging programme - some standards, a few originals, ballads here and blues there. Here is a fully mature talent, in command of his instrument and the history of jazz.

In June 2012 Canada Post announced that Oliver Jones would be the subject of one of two 2013 postage stamps created to commemorate Black History Month. With the honour, Oliver Jones joins the ranks of another Canadian jazz master, Oscar Peterson, whose stamp was revealed in 2005. Show less 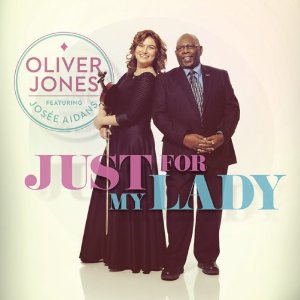 Just For My Lady

All About Jazz musician pages are maintained by musicians, publicists and trusted members like you. Interested? Tell us why you would like to improve the Oliver Jones musician page.