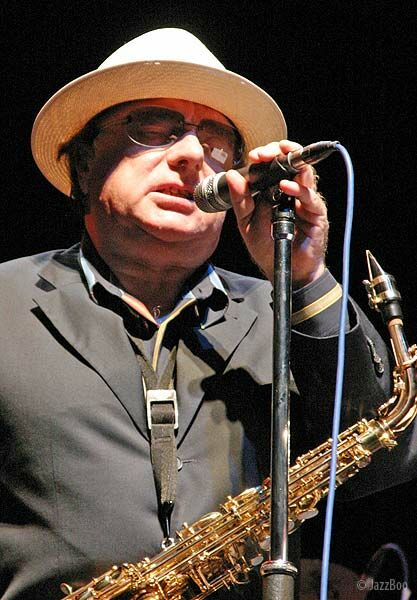 Talk about excitement in the air: after skipping San Diego for 37 years, Van Morrison staged a triumphant return on Wednesday night. The concert at the Civic Theater sold out almost instantly months ago. On the long walk into the venue, four or five different individuals made pleading queries of "extra ticket?" to no avail. The gathering audience were mostly in the "fifty-something" category—and ready to rock.

Morrison has a dodgy reputation when it comes to live performance—so that anxiety was also in the air. As it turned out, the apprehension was all for nothing—Morrison delivered an inspired, energetic and musically superb show. The set-list was an appealing mix of greatest-hits, blues-standards, and lesser known gems from his huge book of originals.

Unlike a ton of singers less than half his age—Morrison didn't need any help in the "pitch-control" department. If they had run his voice through one of those god-awful auto-tune devices—it would have died of boredom. He didn't come close to missing a note the entire evening. Morrison seemed in good spirits throughout, improvising with lyrics and inserting spoken word commentaries in several spots that had the crowd cracking up. He seemed infused with a generous energy that permeated his vocal, harmonica and (surprisingly frequent) expositions on alto saxophone. Morrison took numerous chances with his vocal delivery, accenting and repeating certain words and vowels to great effect. He has always had one of the great, whiskey and honey tinged tenor voices of our time—on this night it seemed especially so.

The concert opened with a medley of the blues standard "Baby Please Don't Go" fused with his original, "Here Comes The Night." It was a strong beginning. It got stronger with an early visit to an old hit, "Brown Eyed Girl." The "fifty-somethings" began dancing en masse. A lesser known, but very smart, selection was the melody-strong waltz, "Fair Play," featuring short, smoking solos from almost every member of his very tight seven piece band. Violinist Becky Ramsey was in top form every time she put the bow to her strings, as was legendary guitarist/banjoist session-ace Jay Berliner. Also intriguing were the jazz/blues elements from guitarist Randy Jones who played with soulful sophistication—yet gritty attack in his short features. The "MVP award" probably went to Paul Moran, who was equally compelling, on piano, Hammond B-3, and trumpet. David Hayes was excellent on both the upright and electric bass, but was criminally under-mixed on both. Drummer Bobby Ruggiero was rock-solid—he appeared to be the concert-master for the ensemble—often standing up to cue various members or flashing hand-signals to others. Reed man Richie Buckley played tenor and soprano saxophones, alongside flute—the short solo routine seemed to hamper him the most—he often appeared to just get going when his time was up.

The concert continued with the hard blues shuffle groove of "Keep Mediocrity At Bay" which boasted great solos from Ramsey, Jones and Buckley. "Foreign Window" was a strong, non-hit selection, "Keep It Simple" and "Precious Time" were perfectly paced and instant highpoints. "That's Entrainment" ratcheted up the excitement quotient, and it spilled over with the "Moondance/ My Funny Valentine" medley. Morrison picked up his alto and joined with Buckley and Moran (on trumpet) for some horn-section riffing that showcased the band's tight rhythmic timing and awesome command of dynamics. Indeed the best moments of this affair came when the group dialed things down to a whisper. Those were the times when everyone could be heard clearly—and they were priceless.

Morrison kept the alto strapped for the instrumental, "Celtic Excavations." Morrison has a great sound on the horn: it's sugar-sweet with just a hint of "skronk" for balance. "Celtic Excavations" shifted into a substantial re-tooling of "Into the Mystic" which drew at least half of the audience to it's feet. When he got to the "I want to rock your gypsy soul..." part, pandemonium ensued. He had the crowd in the palm of his hand, and kept them there with another classic, "And It Stoned Me." Morrison suddenly had 2,500 back-up singers warbling "Oh the water, Oh-oh, the water." There was a swinging, note-perfect rendition of "It's All In The Game" which again featured a round of short, sweet solos from the band, followed by the rollicking, sexual innuendo of Sonny Boy Williamson II's, "Help Me."

The entire audience leaped to their feet for the inevitable closer- Morrison's first hit: "G-L-O-R-I-A." This three-chord garage-band favorite has it's own charm—which wasn't lost on the throng of willing accomplices. Everyone was standing and almost everyone was dancing and singing along. Morrison quietly left the stage and the band rocked on, finally crashing to a halt—and wild, thunderous applause. What a show.