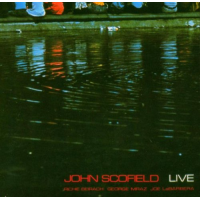 After a lengthy hiatus, Rediscovery returns with an album that may not have represented the first time I'd heard John Scofield...but it was certainly the album that cemented my already firm impression that this was a guitarist on whom I'd have to keep a close watch. Nearly forty years later he remains a personal favourite, and while he's released a gaggle of terrific records, including last year's stellar Past Present (Impulse!), his second album as a leader, Live, continues to rank highly amongst my favorite Scofield recordings.

Whether or not it's coincidental, that Scofield's quartet on Live features two players who would become, thirteen months later, fundamental to the success of fellow guitarist (and fellow Billy Cobham alum) John Abercrombie's first touring band—recently captured on the three-disc Old & New Masters box set The First Quartet (ECM, 2015), which includes 1979's Arcade, 1980's Abercrombie Quartet and 1981's M—the contributions of pianist Richie Beirach and bassist George Mraz to Live simply cannot be understated. Nor can the presence of drummer Joe La Barbera, who adds even more fire to a set that initially featured just four long tunes (two per side of the LP) adding up to a generous 52-minutes, but was expanded in 1987 by Enja to include an additional two tracks and the unedited, 14+ minute version of Beirach's captivating "Leaving," first heard on his initially Japan-only album with flautist Jeremy Steig a year prior, also titled Leaving (Trio Records), reissued on CD by Storyville in 1988.

Also recording a version of the song on his 1978 solo piano album for ECM, Hubris, "Leaving" has become something of a standard for Beirach, but it's the version heard here that remains the definitive group take. Following a staggering three-minute a cappella piano introduction reinserted into the CD version, the rest of the group enters, with Scofield delivering its memorable theme before the tune opens up for a modal workout where the guitarist carefully unfolds one of his best solos of the set; initially spare and ethereally supported by Beirach, Mraz and LaBarbera, it's not long before a more fervent pulse begins to emerge and the piece moves into double time, with Scofield intensifying his solo and introducing serpentine lines peppered with rapid-fire injections and the kind of "outside/inside" playing that would become a touchstone to his entire career. Beirach's solo builds with similar motivic invention, the rhythm section pushing him to such frenzied extremes that you can hear someone in the band shouting "whoo!!" In the background, before the pianist moves from sixteenth note right-hand chords, bolstered by McCoy Tyner-esque left-hand fourths, to an oblique thematic construct played, with almost impossible virtuosity, by both hands.

It's pretty much the same modus operandi for the quartet throughout the entire 73-minute set. Whether it's a more decidedly swinging piece like Scofield's opening "V."—the only tune culled from the studio sessions at Onkio Haus three months prior that would ultimately appear on the Japan-only LP John Scofield (Trio Records, 1978), reissued on CD in 1987 by Blackhawk Records as East Meets West—or the guitarist's aptly titled, slow-burning "Gray and Visceral," it seems that no matter what the context, no matter what the vibe, no matter what the tempo, the quartet of Live could not do anything but burn with the kind of fire that made this an auspicious leader debut for the then-25 year-old guitarist.

By the time of Live's LP release in 1977, Scofield had made a notable debut on Chet Baker and Gerry Mulligan's double-LP Carnegie Hall Concert (CTI, 1974), before spending the next couple of years in the studio and on the road with ex-Mahavishnu Orchestra drummer Billy Cobham. And, while the guitarist's formative years were more informed by bands like The Beatles, Muddy Waters and The Meters, after time spent at Boston's Berklee College of Music, the guitarist became a self-admitted "jazz snob," as he recounted in a 2011 All About Jazz interview.

Still, while Scofield's linear playing on