By JAKOB BAEKGAARD
May 13, 2010
Sign in to view read count
To jazz listeners around the world, the word "Montmartre" has a very special meaning. It is a word that conjures an image, not of French cafés and bohemian painters, as one might expect, but of an intimate little jazz venue in the middle of Copenhagen which once attracted some of the very best jazz musicians in the world. This was the place that became the second home of Brew Moore, Ben Webster, Bud Powell, Dexter Gordon, Johnny Griffin, Kenny Drew, and Stan Getz.

The Story of Montmartre
Jazzhus Montmartre (Jazzhouse Montmartre) was opened on February 17 1959. At that time, the owner of the club was Anders Dyrup who found the now legendary location in St. Regnegade 19 that became the club's address for 17 years (1959-1976). It was also under Dyrup's guidance that the club was decorated by the artist Mogens Gylling who made the famous wall of masks which became a signature for the club. The atmosphere inside the club was relaxed and friendly, with candlelit tables and smoke and talk floating around the heated room. It was a vibrant place, filled with joy and spontaneity—at times people from the audience would even sneak in under the piano to hear the music more clearly. 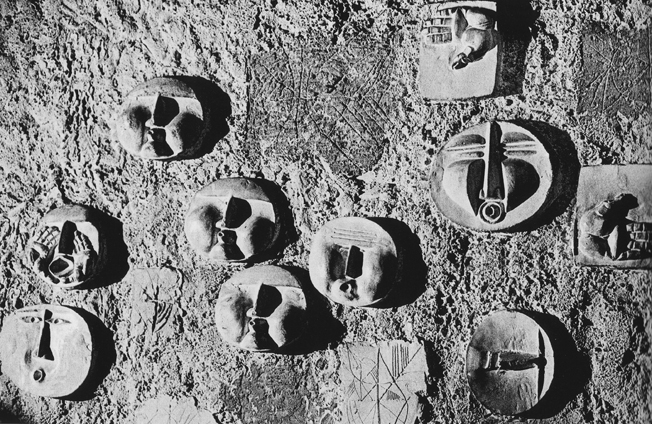 The famous masks created by Danish artist Mogens Gylling became an iconic symbol of Jazzhus Montmartre in the 1960s and '70s.

And there was a lot to hear. Early on, in 1959, Stan Getz' wife Monica Silfverskiöld approached Dyrup to arrange for the saxophonist to play at the club. Throughout the years, Getz was to become an important part of the history of the place and he even recorded his last album People Time at Montmartre. However, Getz was also quite an expensive musician and Dyrup had problems with the economy so by January 31 1960 Montmartre had to close for the first time, but luckily Dyrup's departure wasn't the end of the venue. Instead, Herluf Kamp-Larsen took over and made Montmartre more rentable while, at the same time, keeping the high musical profile and making it even more ambitious by creating an open artistic environment that would attract musicians from around the world. Speaking of the atmosphere in the club, the Danish bassist Lars Malther says:

"I experienced Montmartre as serious venue, more than just a joint. The result was that the musicians—including me—had a feeling of being artists and not just musicians. The place had an aura around it as one of the leading venues in Scandinavia, maybe even Europe. You didn't get a lot of money to play, but they treated you well and the audience was usually enthusiastic so it was a great place to play."

One of the reasons why Montmartre is such an important part of Danish jazz history is that the venue essentially became a training ground for the Danish jazz musicians. Musicians such as the bass great Niels-Henning Orsted Pedersen and pianist Ole Kock Hansen cut their teeth playing behind legends like Dexter Gordon and Lee Konitz. The pianist Torben Kjaer reminisces about the musical education at Montmartre:

"It was pure musical education in front of you. Montmartre's significance lay in its influence on the local community. It was of immense importance to local musicians like us. Just to be able to hear the same soloist several evenings in a row and maybe get the chance to play with them. To me, the significance of Montmartre's influence on my own generation of musicians cannot be overestimated. It was pure education to be there. When Dexter Gordon once said to me, 'Torben, you play too long solos' and then played forty-eight choruses himself, I understood what he meant. Those were the kind lessons that you learned at Montmartre" 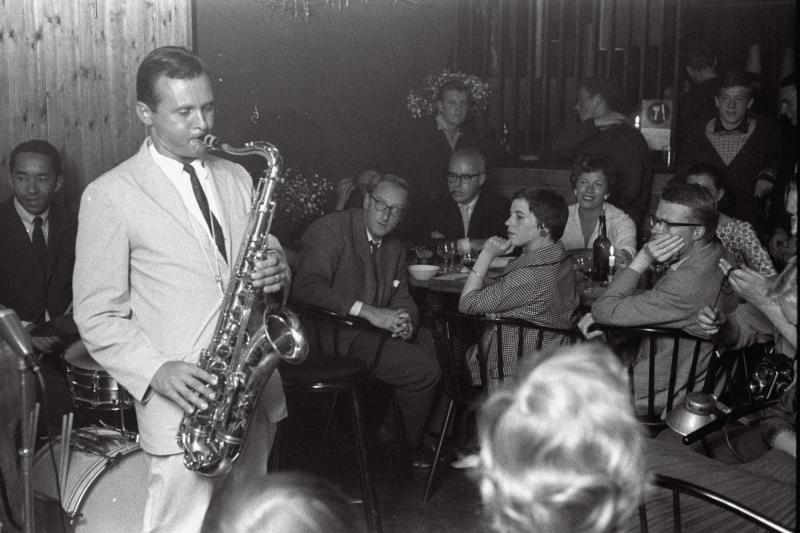 The early sixties and seventies were Montmartre's golden era. It was a time when jazz was popular music on equal terms with rock and pop, but throughout the seventies, the musical focus shifted and gradually jazz became more marginalized and it became harder to earn a living having a venue only playing jazz. In 1976, Montmartre folded once again, but this time it was end of the place—at least as a pure jazz venue located in St. Regnegade 19. Montmartre moved location to Nørregade 41 and started to experiment with other styles of music and in 1995 it came to a sad end when it was closed and replaced by a discotheque.

The New Montmartre: A Manifesto
For a long time, it seemed like Montmartre would be a finished chapter in the history of Danish and European jazz, but on February 22 2010, the Danish jazz pianist Niels Lan Doky and his friend, media executive and entrepreneur Rune Bech announced that they would re-open the club at its original location in St. Regnegade 19. It was revealed that the new Montmartre will be run as a non-profit venture with an ambitious musical profile that will aim to re-insert Montmartre on the map of Europe's greatest jazz clubs. To achieve this goal, Lan Doky and Bech have written a manifesto that acts as a guideline for the club. It includes eight guiding principles that read as follows:


Opening Night
With these eight principles, the scene was set for the club's opening on May 1 2010 where the drum phenomena Jeff "Tain" Watts led a Scandinavian All-Star Band playing his own compositions. Before the band entered the stage, Niels Lan Doky, Rune Bech and the British filmmaker Riz Merchant, who is the daily manager of the club, told about the project and welcomed the audience to participate in the opening of the club and then the real party started when the musicians began to play. 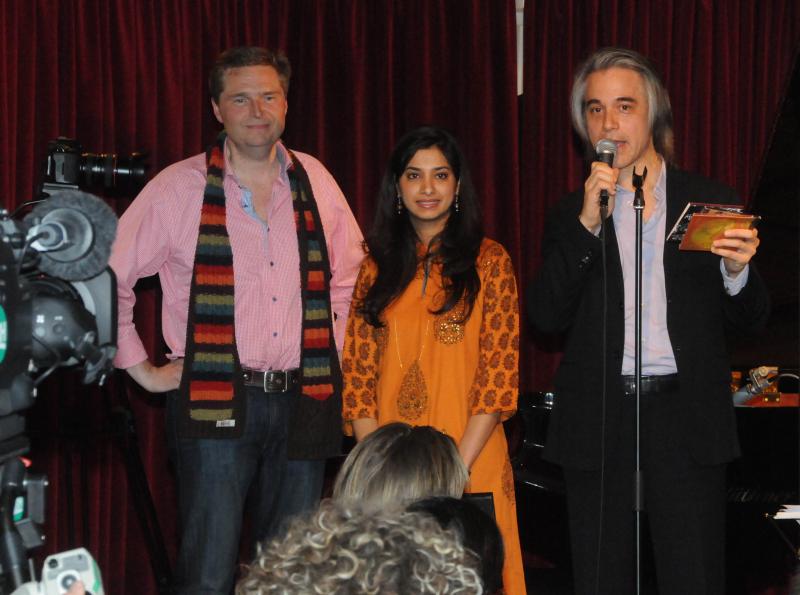 The founders of the new Montmartre: Rune Bech (right) and Niels Lan Doky (left) with the general manager of the club, Riz Merchant (middle)

Watts began with "Wry Köln" which introduced a drum solo that immediately showed his advanced skills on his instrument. He made the snare and cymbals sing in a polyphonic groove that paved the way for the rest of the band to enter with a frontline of horn players working up a sweat from the start. It was an all Swedish horn line-up with trombonist Vincent Nilsson, fiery trumpeter Anders Bergcrantz and the Coltrane-inspired tenor saxophonist Tomas Franck doing a very good job of keeping up with the energetic Watts whose sheer life force shone out of him.

The program was varied with a healthy mixture of ballads and up-tempo grooves. Tunes like "Muphkin Man" and "Return of the Jitney Man" swung solidly and gave plenty of space for solo endeavors. In fact, the groove was so spellbinding that Watts, at the end of first set, exclaimed with a grin "nice groove I'm having here. I don't wanna stop." The same thing seemed to be the case with the band which really enjoyed itself and responded positively to the good vibe that came from the smiling audience tapping their feet.

The second set was even better than the first. The soul-jazz of "Katrina James," a number which can be found on the acclaimed release simply titled Watts (Dark Key Music, 2009) emphasized how Watts seamlessly integrates different strains of musical genres into his writing, covering everything from blues to jazz, gospel and soul. His Danish rhythm section of bassist Morten Ramsbøl and pianist Jacob Christoffersen followed his every move and especially Christoffersen more than one time caught approving nods from the leader when soloing.

Watts is mostly known for his ability to work up a hard-driving beat, but he is, in fact, also a sensitive ballad player and this strength came to the fore in a beautiful rendition of "Owed..." Here, Franck switched from tenor to soprano saxophone and made the notes soar like butterflies.

The concert ended with an extra where Niels Lan Doky was called in to replace Christoffersen in the piano chair. He then played some solid bop-phrases to the wild cheer of the audience who just couldn't get enough of the music.

While it is noticeable that Montmartre has changed, the room being brighter and somewhat more stylish, the spirit of the place remains essentially the same. The things that made Montmartre famous back in the days, the relaxed, artistic atmosphere and the high level of musicianship, are still there. Thus, there is ample reason to believe that Lan Doky and Bech can live up to the lofty ambitions of their manifesto. However, a legendary venue isn't preserved through words, but through the actual music being played and as the re-opening of the venue clearly underlined, the music is indeed still playing at Montmartre.