You have to love RareNoise Records for inventive sonic turbulence. Add to this alto saxophonist Rebecca Sneddon sense of humor aping the title of this "double EP" from two of the most famous saxophone recordings of the 1950s: Ornette Coleman's The Shape of Jazz To Come (Atlantic, 1959) and Sonny Rollins' Saxophone Colossus (Prestige, 1956). What The Shape of Doomjazz to Come/Saxophone Giganticus does is turn that tradition on its ear and inject it with a whopping dose of Black Sabbath...all to pretty incredible results. All of the pieces are simply constructed around often descending bass figures provided by Colin Stewart over the cacophonous drumming of the single-named Archibald. Sneddon wails in the piccolo register of her alto going beyond Art Pepper's soul scalding flights at the end. Not for the faint of heart.

Picking up where Free Nelson Mandoomjazz leaves off is the dual-bass attack of Lorenzo Feliciati & Colin Edwin on Twinscapes. The music is immediately prospective and retrospective: overdriven electric basses summoning the spirit of Iron Butterfly. With a percussive sound recalling Stanton Moore, the ensemble tours the rhythmic confines of apocalypse jazz on "Shaken," sideways funk on "Alice" and space music balladry on "In Dreamland," which presents a Phil Collins- type vibe. "Transparent" offers another calm interior piece, more moody that impressionistic with an ethereal trumpet by Nils Petter Molvaer, who vaguely channels Miles Davis because everyone vagule channels Miles Davis. The two bassists have chops to spare, using them in the most melodic ways available. This is ambient music with a purpose other than to provide a background.

On the other side of the universe from RareNoise are the Benedictines of Mary, performing selections from the Divine Office on Lent at Ephesus. In 1994, the Benedictine Monks of Santo Domingo de Silos released on Angel Record music recorded 20 years previously. Chant went on to become quite the cross- over musical phenomena at a time when New Age and Ambient music were getting to top speed. One could say that plainchant is the original New Age. Lent at Ephesus is the good Sisters' third release after Advent at Ephesus (Decca, 2012) and Angels and Saints at Ephesus (Decca, 2013). All three recordings present settings from known and unknown composers from the last millennia. The all-female choir achieves a light purity of sound often absent from mixed or all- male choirs. There are melodies familiar even to the pagan: "O Sacred Head Surrounded" made famous in J.S.Bach's oratorios and DuBois' "Adoramus Te Christe." This is Soul music that permeates the spirit while relaxing the anxious psyche of a frantic age. 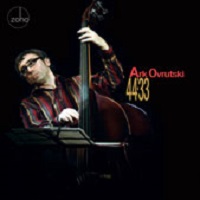 Ukrainian bassist Ark Ovrutski enters a comfort zone with his third recording as a leader with 44:33. He is joined by the NYC-new guard drummer Ulysses Owens, Jr. and trombonist Michael Dease who, along with saxophonist Michael Thomas and pianists David Berkman and Benito Gonzalez, ground this collection of original compositions, save one ("Milestones") firmly in the post bop vernacular. Outstanding is Dease, who blows a mean Jack Teagarden on "New Orleans" and lays waste to the ballad "Baby's Vibe" with Thomas. The leader Ovrutski manages to be front and center on the recording without getting in anyone else's way. His composing is lyrical and never wordy or overextended. His solos are sharp and piquant. When he walks, it is with a spring in the beat and always right on time (hear "Medium"). The cover of Miles Davis's first "Milestones" (composed by pianist John Lewis and recorded with Charlie Parker August 14, 1947, is the freshest bebop one is likely to hear. 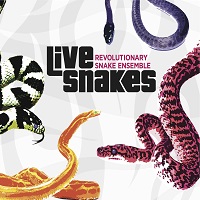 Noisy and totally out-of-focus, Live Snakes is a beautifully provided big- band recording that chooses to play in all directions at once, capturing in its net of performance a dozen styles from one hundred years. The differences between the opening march, "Parade" and the boozy "Rock of Ages" are myriad, adding to the charm of this over- the-top recording. Erstwhile leader Ken Field is a clever programmer and arranger who knows how to both pace and place. "Parade" warms things up with progressive drumming by Kenny Wollesen and contrapuntal argument laid down by Field and his redds section. This segues well into the griot- inspired "Cassandra 4" before tipping the martini in praise on "Rock." Things remain refreshingly off- kilter through an organically wrought "Caravan," heavy on Blake Newman's acoustic bass playing, that well establishes a relentless vibe before the familiar intro is presented. Central to the disc is the triptych of "For Karen" (written for Field's recently deceased wife), "I'll Fly Away" and "Que Sera Sera," which exist as a New Orleans Sunday morning march. This music smiles and winks. 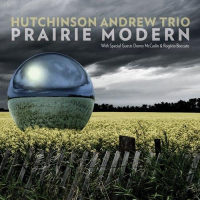 The title Prairie Modern summons a vision of George Winston's midwestern corpus, full of expansive musical thoughts presented in equally open spaces. I cite Winston in the most respectful terms as "New Age" music often has negative connotations. Winston remains the best epistemological link to music that both celebrates and sounds like North America. Hutchinson is bassist Kodi Hutchinson and Andrew, pianist Chris Andrew. The trio is rounded out with drummer Karl Schwonik with guest spots for saxophonist Donny McCaslin and percussionist Rogerio Boccato. the music is spare and broad with simple melodic figures and arrangements. Even a city slicker like McCaslin achieves a down-home tone. Andrew and Hutchinson do have an impressive empathic rapport that enhances the pastoral elements of their sound. "Prairie Wind" captures the essence of the disc in its simple and profound direction.

Birchall & Woolhouse
The Scenery of Life Unfolding
Self Produced
2014

The Scenery of Life Unfolding is a piano-bass duo recording by Australian bassist Shannon Birchall and pianist Jeremy Woolhouse. The two enjoyed the inspiration found in the Charlie Haden duet albums he made with Hank Jones ( Steal Away (Polygram, 1994) and Come Sunday (EmArcy, 2012)), a spirit very much in evidence on The Scenery of Life Unfolding. Both musicians are as classically-based as they are in jazz or even popular music, a fact easily heard on the ten selections herein. This is mood music that ranges from the pastoral arco of Birchall's bass on "Echoes in Emptiness" to the cerebral and anxious "Virtual Affection." Moody with an edge of crankiness inhabits "Four Hours Out of Heathrow" where Birchall leads with his bass, spinning a tale of boredom and quelled impatience. Woolhouses fills with thoughtful and almost shy micro- melodies over a well established harmonic structure. "Tears of Summer" sports a slight Latin shade in its rhythm, while the title piece is very much an evolving piece with a wide- open spaces harmony and folk personality. Pretty and unadorned, the simplicity of the piece is its greatest asset. It paints a prairie picture of agrarian life in a simpler, slower time, when things to be enjoyed were savored rather than simply consumed, which may well describe this entire project. 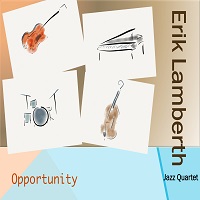 Guitarist Erik Lamberth stated he wanted to make a very traditional jazz album. The result is Opportunity, recorded live with most of the tracks were done in 1-2 takes, all in a single day using tube pre- amps. This is close to the thinking of period instrument, historically informed classical performance. Lamberth roundly approximates a '50s jazz sound not unlike that of Grant Green. He also achieves this sound in a way that is beyond sonic. His performance style is very "American Primitive." Lambreth has the chops, to be sure, but he shows a certain precise restraint in his playing that exposes the songs the interior of the compositions he is focusing on. Glenn Miller's swing-era hit, "In The Mood" would be the last song one would expect to hear on this recording. Yet here it is; played in a most attractively reharmonized and low-fi way. think of this tune as a blues performed by Wes Montgomery, whose "West Coast Blues" closes the disc. Lamberth admits to being under the Montgomery spell. Lamberth's quartet members are equal to the task. Pianist Vince Ryan blows through every jazz piano style on the same tune. Then there is the original "SRV Blues" paying tacit tribute to Stevie Ray Vaughan. Lamberth avoids the inevitable imitation of Vaughan by keeping things simple within the chosen twelve- bar format. There is much to like about Opportunity, very much indeed.

The Pikey Project is Mike Wilke and Nocola Cornwell, two free spirits who did their time in television and took off fo parts unknown, taking pictures, making music and meeting people. These sides were recording in Grenada, Bequia, Colorado, and New York City, basically where the pair sat for a moment while carrying on the modern gypsy existence. (from which the band name is derived). Wilkie is the musician and has titled the project Threesome with the tacit subtitle "Compositions for piano, bass and drums." That it is, and in spite of the disc cover saying, " WARNING: This album contains jazz" the disc contains something beyond just jazz. All that is good about New Age Music, its clarity, listenability, accessibility is all here in an improvisatory format (can there be any better than the jazz piano trio?). The disc open with "The Architect's Wedding" and is really quite an appropriate metaphor for the recording. All of Wilkie's compositions are architectural, solidly built rhythmically and harmonically. There is little abstract about these pieces. They are all durable and performed as if so.

Is Gunther Schuller's Third Stream alive and well? Possibly. Trumpeter/composer Douglas Detrick's Anywhere Ensemble, a "chamber jazz" group made up of his trumpet, saxophone (alto and soprano), cello, bassoon and trap set, performs Detrick's ten-part suite The Bright and Rushing World seamlessly mixing composed and improvised sections of music that resemble a Prozac-treated Charles Ives thought composition. This music may be thought of as jazz from a non-traditional jazz combo, except Detrick errs to the classical side of things more often than not. All of the instruments are afforded solo space and interesting counterpoint is achieved (as is on "A Seeker, insubmissive"). This counterpoint symmetry is broken to pieces on the title piece, being reassembled at the end. The Bright and Rushing World is, at once, something new and old. Using with conservative intelligence the wares provided from both the classical and jazz side of things, Detrick create something fresh and compelling.