By IAN PATTERSON
July 15, 2010
Sign in to view read count
Jazz Gunung 2010
Bromo, Indonesia
July 3, 2010
Gunung is not the name of the town which hosts Jazz Gunung; in Bahasa—the predominant language of Indonesia—it means mountain. Mountain Jazz is as good a name as any given that this one-day festival is staged among the swirling clouds, some two thousand meters above sea level in the East Java town of Wonotoro. It's a three-hour drive from the nearest airport of Surabaya and the contrast between sprawling conurbation with its teeming roads—chaotic yet curiously functional—and the bucolic idyll of the high mountain pass where Jazz Gunung is staged couldn't be more pronounced. 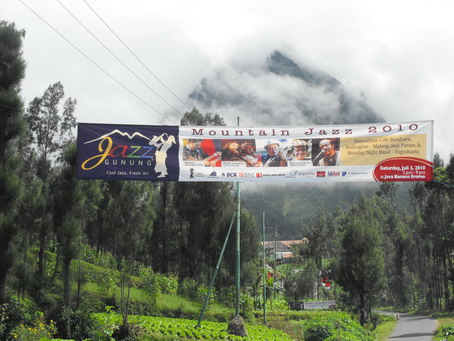 Passing through town after town, the sight of tricycle rickshaws tenaciously negotiating the thick traffic serves as a symbol of the stubborn refusal of the past to cede to the roller coaster changes modern Indonesia is undergoing. However, the occasional crumbling façade of colonial Dutch architecture is reminder enough of the inevitable passing of all things, empires and tricycle taxis included.

The turn-off to Wonotoro and Jazz Gunung leaves the towns behind and soon bright green rice fields and tall walls of corn roll endlessly by. The narrow, rutted road winds its way up a valley, wildly lush and verdant. The Tengger inhabitants of the valley are Hindu—unlike the majority of lowland Javanese who follow Islam—and have the leathery color of the Nepalese or Tibetans.

The steep mountain sides are carefully sculpted into agricultural terraces, often at seemingly impossible angles of seventy five degrees. On the lower slopes and on the plains farmers toil in fields of mulberry, cabbage, lettuce and tomato which will end up in the markets of Jakarta, a five-hour drive away. It is odd to think that some of these farmers will later be performing in the jazz festival. In the villages women sell Edelweiss by the side of the road, and children on holiday from school fly red, yellow and blue kites which lift and dance easily in the mountain currents.

The valley is bursting at the seams with trees, coarse bushes, ferns and palms. Even the areas around the snug, brightly colored village houses are sewn with vegetables, or flowers such as rhododendrons or buttercups. The incredibly fertile soil of this area is due to the active volcano Bromo in the next valley, and for longer than anyone can remember it has spewed out smoke and ash into the air. Roughly every September during the Kasada festival the Tengger people climb to the rim of Bromo and throw offerings of flowers and live fowl to the God of Fire to ensure good fortune for the coming year. All in all, it is a strange yet undeniably stunning setting for a jazz festival.

The man behind Jazz Gunung is Sigit Pramono, a senior Indonesian banker, jazz lover and keen photographer. Pramono initiated a number of bank-funded infrastructure and economic programs in the area—a national park—which have directly benefited the lives of the Tengger people. At the same time Pramono has indulged his passion for photography and over the years he has published several books of his photographs of the volcano, the surrounding terrain and the local people, endearing himself to them in the process. In '07, during the sacred Kasada festival Pramono received the rare honor of being appointed as a senior, honorary citizen of the Tengger people. 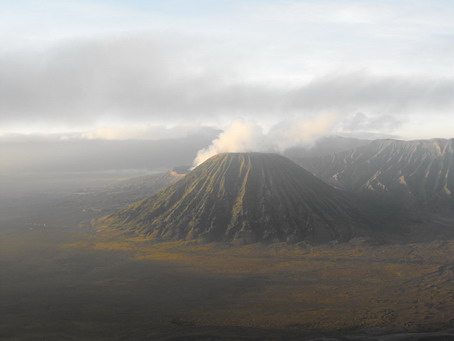 Most tourists however,come to the national park to see the sun rise over Bromo—clouds and fog permitting—and it's not a bit of wonder; on a clear day the view is other worldly. Eight peaks wind around to form the crater rim of an ancient, massive volcanic mountain called Mt Tengger which has a diameter of ten kilometers. It is difficult to imagine the size of the eruption which threw up the Tennger massif caldera; in the foreground in the middle of the massif is the smoking, sulphurous Bromo flanked by two extinct volcanoes and surrounded by the Sea of Sand. In the far distance the great volcano Semeru, belching out steam, smoke and stones every fifteen to twenty minutes. Semeru last erupted in '04 and it is not surprising that a typical Tengger greeting translates as: "May you always be in safety."

The tourists however, usually stay only one night to catch the sunrise before departing. Asked to rebrand the area as a tourist destination worth lingering a while longer over, Pramono came up with the idea of a jazz festival, staged in the grounds of his own Java Banana Bromo lodge in the town, aided by Djaduk Ferianto and Butet Kartaredjasa. With the organizational and programming aid of the indefatigable Agus Setiawan and Wartajazz.com—the most active jazz advocacy body in Indonesia (and beyond)—the first edition of Gunung Jazz was successfully held in '09, with about five hundred people attending. Only two bands performed first time around, but this year the program has grown to six bands. So far all the bands to perform at Jazz Gunung have been Indonesian bands, but next year will almost certainly see the festival incorporate international bands and a second stage. Clearly, Pramono has a long-term vision for Jazz Gunung. 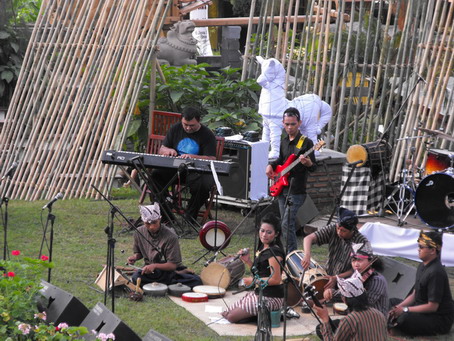 The music began with TDT Percussion, a group formed in '07 at Universitas Negeri in Surabaya where the members are studying percussion as a major. The music was an arresting mixture of western and Javan instruments, jazz scales and traditional Javanese vocals. With the double-headed kendang drum of Rofi'ul Fajar and the electric bass of Hendra Tanaya forming a strong rhythm team, pianist Bagus played straight ahead jazz lines over the expressive and ethereal vocals of Ayu on the opener "Semebyar." The violin of Jarmani played a continual lament and Cecep on banjo and Kholam on bonang (pot-like gongs) added layers of sound to the rich mix which takes the Banyuwangi flavor of East Java as its main influence.

Bagus's touch on piano was understated in a very Ellingtonian way and only on the third number, "Ojo Cilik Ati," did he stretch himself in graceful solo tinged with the blues. Ayu's yearning, imploring vocals were central to the always rhythmic music and violin played sympathetic counterpoint for the most part. On the final number, "Ulan Andling Andling," Bagus played McCoy Tyner-like accompaniment to Ayu's balladic delivery. A short but exhilarating passage played on four tambourines and kendang brought the song and the set to a dramatic percussive conclusion. At around thirty minutes the set seemed a little too short, surely a good sign that the music is making a connection. TDT Percussion demonstrated elegantly that different musical languages can merge to speak with one voice; Duke Ellington, the original world music musician, would no doubt have approved.

TDT Percussion are part of Jazz C26, Surabaya; these Jazz Communities are found all over Indonesia and are meeting places for jazz musicians—professional and amateur alike—as well as non-playing devotees of the music. All are bound by a love of jazz and to its credit Jazz Gunung made space for three non-professional jazz bands from various Communities in this year's program. This is a great opportunity for young musicians to play in front of an appreciative audience on a slightly larger stage than normal and this encouragement can only be good for the development of jazz at the grass roots level in Indonesia.

The MCs for Jazz Gunung were Butet Kartaredjasa and Djaduk Ferianto. Farianto is an accomplished musician but judging by the response of the crowd he may well have a second calling as a comedian. Kartaredjasa for his part had the audience in stitches, so it came as no surprise to learn that he has long been a political satirist, making a name for himself during the Suharto years, which gave him plenty of satirical ammunition. Even though the meaning was lost on this reviewer it was nevertheless refreshing to hear a jazz festival audience so amused and entertained by an MC, as they can often be dry and rather mechanical.

Next up was Balinese group Balawan & Batuan Ethnic Fusion. This group is an exciting blend of Balinese gamelan and Balawan's outstanding guitar playing. His tapping and touch playing on a Stephallen double neck—an Indonesian manufactured instrument—and a mounted guitar brought Stanley Jordan to mind, and the comparison in no way flatters Balawan, a genuine virtuoso. The eight piece band, like TDT before, was a combination of western and native rhythms. With no disrespect to TDT it would be fair to say that the four Balinese gamelan musicians in the group are all master musicians. 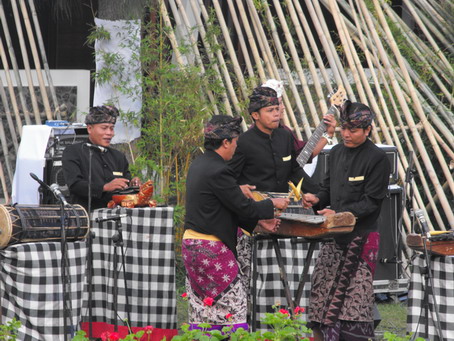 The incredibly fast unison playing of Nyoman Suwida and Wayan Suastika on ganesa—a member of the xylophone family played simultaneously by two musicians with a single hammer each and constant hand-damping to alter the pitch of the notes—was absolutely spectacular. When the band was in full motion with the addition of the propulsive kendang of Wayan Sursana and the perpetual ceng ceng (small cymbals) of Wayan Sudarsana the results were simply electrifying and it rather whetted the appetite to witness a full thirty-piece Balinese gamelan orchestra unleashed.

Since releasing his debut album GloBALism (Chico & Ira Productions, 1999) Balawan has earned a reputation as one of the most talented guitarists in Indonesia. 1st Edition, (Sony Music Indonesia, 2007) pitted him with two of the countries finest and most progressive guitarists, Tohpati from SiamakDialog and Dewa Budjana, a recording that further cemented his name as an axe wizard par excellence. Although there was plenty of virtuosity in his playing, including simultaneous two-neck displays of dexterity, Balawan left copious room for his gamelan musicians to impose their mark on the music, with plenty of foot-to-the-floor unison playing to boot. 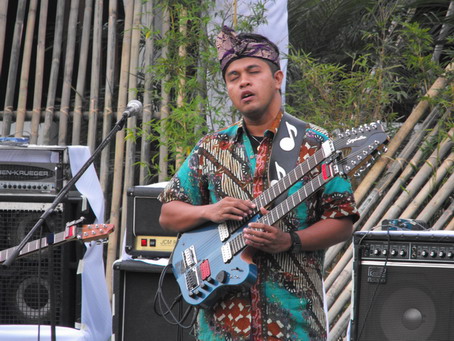 The chemistry at work in a group formed in '97 was palpable, and Balawan later recounted how he and the gamelan players had grown up together in the same village. A gamelan player originally, Balawan came late to the guitar by his own admission, at the advanced age of eight, and his technique—honed by eight hours practice a day in the early years— is a mixture of jazz and Balinese scales. Asking the ganesa players to slow it right down, and mimicking their slow motion playing, he demonstrated to the audience how he imports the same musical language to his guitar, thus illuminating a version of Chick Corea's perennial "Spain" which had a distinctly Balinese flavor to it.

The band began with a melodious tune reminiscent of the Pat Metheny which featured Eko Wicaksono on keyboards, before launching into "The Dance of Janger," one of several tunes from Magic Fingers. (Sony Music Indonesia, 2005) The velocity of the ganesa playing was thrilling and surely got the blood racing, not unwelcome given the cool ten degrees— woolen caps, fleeces and overcoats was the order of the day.

Bali has a strong Hindu identity and Indian music has obviously been an important influence on these musicians who sang konokol vocals with a notable Balinese accent. With the aid of pedals and various devices including EBow, Balawan transformed the sound of his guitar into a sitar on the lovely original composition "Summertime," a showpiece for Balawan's singing as much as his guitar playing. An impressive vocalist, his scatting in unison with his guitar playing brought to mind the lilting Mediterranean melodies of Italian guitarist/vocalist Pino Daniele.