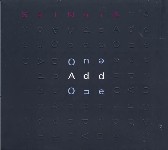 He's a man of few words who prefers a simple approach. His debut EP, My Heart Beats On The Moon (REMusic Records, 2008), a collection of five songs, is now followed by yet another mini-album of only seven compositions. Once again, Dutch singer-songwriter Skinnie makes sure he is in the best of company, this time relying on two outstanding and seasoned musicians—guitarist Martijn van Agt (Anouk, Ilse DeLange, Sarah Bettens), and multi-instrumentalist/producer Michel van Schie (Candy Dulfer, Anouk, Soulvation)—who definitely elevate Skinnie's songs onto a higher plane.

Skinnie's reflective lyrics about love, loss, generosity, resignation, truth, dreams, desire and playful contemplation are woven into a setting of lush musical moods leaning towards pop, country, blues and jazz in an intelligent design. The subtle tones of van Agt's pedal steel and slide guitar characterize a sense for detail and finesse that all three musicians have in common. The disc starts and ends with "Sailing," in a single edit and album version. It's a catchy tune, with a likewise attractive and perhaps recognizable imagery provided by lyrics about escaping reality for a while, until a neighbor at the door complains about the trash in the garden. Skinnie delivers his songs in a warm and genuine manner with his deep and sometimes husky voice.

The title track has a few surprises, and showcases van Agt's skills on guitar with distinctive flavors and hints reminiscent of the sound that makes the music of Steely Dan appreciated in wider musical circles. It's an approach and arrangement that also returns in "No Little Girl, No More." "Can't Cut You Loose" stands out; a beautiful sensitive ballad about accepting life and relationships the way they are, after questioning their values and virtues.

It's a very pleasant album that, like its predecessor, asks for more. If there has to be critique, then it would serve to point out some flaws in the English lyrics. A few mistakes that can easily be forgiven, as these sailing and flying Dutchmen do understand the craft of musicianship to the max. Music, after all, is a universal language; a language that Skinnie and company know how to speak very well.

Sailing (radio edit); One Add One; Mama I Just Killed A Girl; Nobody Else; No Little Girl, No More; Can't Cut You Loose; Sailing.