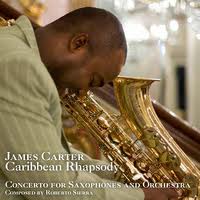 Multi-reedist James Carter is both a student and master of all things saxophone. He is a keeper of the jazz flame much in the same way trumpeter Wynton Marsalis is, without Marsalis' conservative inclinations. Carter has been inventive in his projects, two of which were the well-received Chasin' The Gypsy (Atlantic, 2000), addressing the music of guitarist Django Reinhardt, and Gardenias For Lady Day (Sony, 2003), tipping his hat to singer Billie Holiday. Carter has also fronted a progressive organ trio resulting in the uniformly fine Out of Nowhere: Live At The Blue Note (Half Note Records, 2005).

Caribbean Rhapsody is the fruition of a decade of work Carter did with composer Robert Sierra that resulted in Sierra's Concerto For Saxophones and Orchestra and Caribbean Rhapsody. Much has been made of this fusion on "jazz" and "classical" in light of the mostly failed history this union has experienced since Gunther Schuller coined the term "Third Stream." Carter, working closely with Sierra, has crafted an almost seamless interface between these two fine- tuned and often fussy genres.

Equal parts Modern and Late Romantic classical, Concerto for Saxophones and Orchestra sounds like the creative love child of Anton Bruckner meeting William Grant Still, Pierre Boulez, and Gyorgy Ligeti on Martinique for the summer. Complex and highly orchestrated on one hand, and humidly organic on the other, the three-movement piece brims with exuberant creativity. The first movement, marked Ritmico, is a frenetic dance cycle which might have been choreographed by Paganini, had he done such things. Carter plays tenor, full-bodied with a darkly noir finish.

ADVERTISEMENT
The second movement, Tenderly, features Carter playing a sinewy soprano saxophone, sparring with the orchestra's flutes. Carter's playing is virtuosic, shedding light on just what the big deal was when he emerged in New York City in the mid 1990s. The middle brass lay a plush path for Carter, whose soprano flight-of-fancy gains a dense lyrical momentum with cinematic quality. In the final movement, Playful—Fast (with Swing), Carter returns to tenor and floods space with a torrent of notes and rhythms that make up that gumbo called "American Music."

The second accompanied piece is Sierra's single-movement Caribbean Rhapsody, which Carter shares with violinist Regina Carter and the Akua String Quintet. A chamber piece on the dust jacket, in Caribbean Rhapsody, Sierra smooths out all of the Modern Classical hairpins into a sumptuously lyrical whole. The ensemble pulls out all of the stops attacking jazz, blues, jump, Latin and Caribbean musics. Carter begins on soprano, playing beautifully, dancing with Regina Carter over pizzicato waves by the quintet.

Carter's soprano playing lifts the instrument back to the sacred levels of Sidney Bechet and out of the smooth-jazz muck and free jazz mire it has existed in since John Coltrane first saw The Sound of Music. Carter moves to tenor for the internal and final sections of the rhapsody, which recalls the shifting rhythms of an island breeze influenced by dark rum and sun. Reginia Carter finds her soundtrack voice, dueting with Carter's tenor rambunctiously. The piece concludes with a musical fiesta more from Havana than further south. The Rhapsody is played con brio indeed.

Carter composed and improvised over two solo interludes, on tenor and soprano respectively. The "Tenor Interlude" is contemplative and searching. Among Carter's deluge of thoughts is a lyric stream well conceived and performed. Carter squeaks and squawks just enough to let you know he is serious and not enough to be boring or annoying. His "Soprano Interlude" is likewise. Carter coaxes a pretty, even beautiful sound from his horn, without so much as a hint of the sentimentality associated with the popular modern performance. In a field populated by "good" and even "exceptional" recordings, it is nice to hear a "Caribbean Rhapsody" that is truly outstanding.