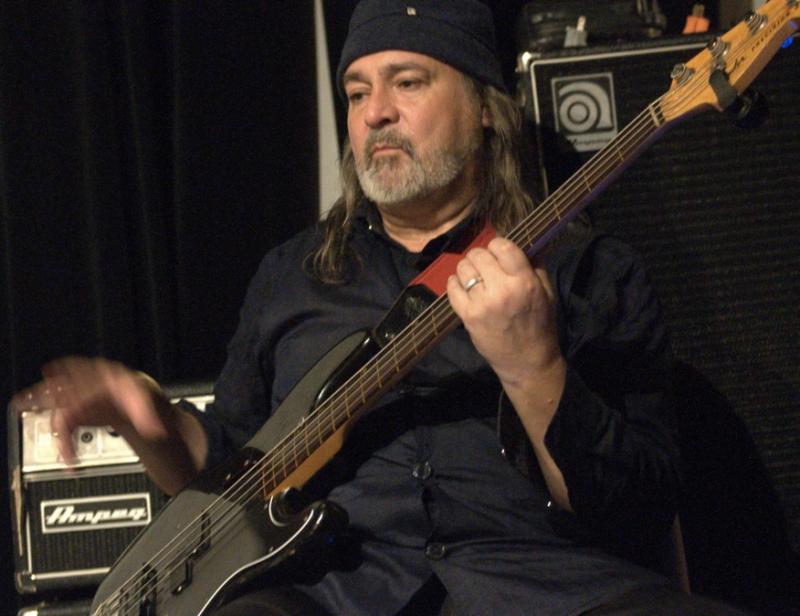 Bassist Bill Laswell's week-long residency at The Stone featured an enticing selection of combinations, not least this quartet, co-fronted with guitarist James Blood Ulmer. Also, the globally-adventuring percussionist Adam Rudolph connected with drummer Don McKenzie, the least well-known player here, who's worked with Vernon Reid, Elliott Sharp and Marc Ribot. The late set had the feel of a jamming session, as Ulmer and Laswell circled each other, knitting together spirals of continually re-generating groove, emanating from a bluesy base, speckled with harmolodic dust, and shifting through sections that switched the prominence of each band member. Ulmer didn't sing, which established a different emphasis, naturally swerving away from the blues-soul abstraction that would otherwise have held sway. This turned out to be a gratifying move, as it's not often that Ulmer's serpentine guitar solos are heard at length during his own recent gigs.

Laswell's low-hung rumble provided an unaccustomed framing for Ulmer's lines, sometimes without defined note-borders, at others taking on a propulsive riff-nature. Despite this head-nodding progression, the set ultimately sounded inconclusive, with an air of casualness that was too pronounced. It would have been instructive to witness the earlier set, as this second show beamed out an aura of introverted weariness. It was Rudolph who emitted the brightest spark, skittering around his impressive conga set, repeatedly goading Ulmer and Laswell on to fresh cycles of groove. The set was extremely short, at barely 40 minutes, and Laswell in particular appeared very decisive as he promptly headed towards the basement stairs.

Perversely, guitar-slinger Ty Segall, renowned for his extreme-volume solo emissions, elected to play a series of acoustic shows around NYC, sometimes two in a single night. Hearing the whoops, bayings and affectionate heckling from the sold out Bell House crowd, this altered manifestation appeared to make little difference for Segall's acolytes, except that these responses were extra-audible on the exposed soundfield. This fresh setting had the effect of exposing Segall's songwriting, shorn of psychedelic garage rock trappings. In this new light, he and his sidekick Cory Hanson sounded uncannily close to Everly Brothers territory, their high, tight harmonies sweetening the sometimes more gritty lyrical content.

There was an emphasis on new material, but this didn't seem to upset the fan-base, as would so often be the case. Strangely, it was Hanson who took many of the solos, even if the definition of such an activity didn't necessarily involve many spidery lines, but more of a sculpted, in-motion strum-sequence. Segall himself spent part of the time spangling out on his 12-string axe. Entertaining and communicative though this acoustic setting is, it must be emphasised that Segall's strength lies in searing electric guitar kaleidoscopes rather than soft-tongued acoustic troubadour antics, which tend to expose weaknesses in his songwriting skills. Full marks for trying out something different, but our inner lust is for full sonic trashing, the strength of those whimsical lyrics lying in their contrast with all the heavy licking.


Here's another sonic levels wanderer, although the English folk troubadour Richard Thompson was travelling in the opposite direction to Segall. He might have forged his early reputation on the electric guitar, but the vast majority of Thompson's touring activities involve solo acoustic performance. Even when he takes his full band out on the road, the focus often falls on his sidemen. With this trio outfit, the leader guzzles most of the spotlight juice, still sounding deeply rootsy on the vocal front, but littering each song with extended guitar solos that frequently veer towards what can only be deemed avant folk.

Thompson opened the evening with a solo acoustic set, filling in for the absent Canadian Doug Paisley, who had suffered a visa malfunction. This had the effect of the headliner being the ultimate warm-up act, establishing an early bond with the near-capacity crowd, tossing off witticisms, being vaguely prickly and already passing through a range of emotions, and a wide subject-splay, before he'd even 'officially' started. After around thirty minutes, Thompson was worried about cutting into the main act's time, so deftly ducked out, teasing the audience about the greater-amplification heights to come.

The volume for the acoustic opening was much too high for the size of the hall and the nature of the music, often obscuring Thompson's words. Ironically, the levels for the main electric set were more appropriate, even though they were technically louder. This was all in keeping with the general musical thrust. The trio is a focused entity, with bassist Taras Prodaniuk and drummer Michael Jerome adopting a suitably forceful level of attack to bolster their leader's energies. The core approach is similar to Thompson's acoustic persona, his songs being easily translatable, but the fast flow of amplified guitaring imbues the material with a burning energy, as the perpetually soloing verse-beds swoop up into the fully expressive stratosphere during the sometimes well-extended gushes that populate the majority of Thompson's songs. A peak example was the lengthy "Hard On Me," which contorted in wonderfully atonal fashion, guitar angularly struggling within a loosened straitjacket.

The Laswell residency at The Stone continued with a larger group, seemingly settled on an improvisatory mode. In this instance, Method Of Defiance included Guy Licata (drums), Adam Rudolph (percussion), Henry Kaiser (guitar), Steven Bernstein (trumpet) and Dr. Israel (voice/electronics), with two members of the Master Musicians Of Jajouka guesting at an early stage of the set, and remaining for the duration (leader Bachir Attar was one of the pair). Here was an example of spontaneous creation that ignited quite quickly, reaching its apex early in a consistently energised set. The speedy knitting was evident on the faces of the players, as they grinned at each outrageous hiking of power, rhythmic constructions taking on an independent life, almost out of control, at least to the individual artists. A kind of collective existence took over, the full intersection arriving as the Jajouka players set up their microphones and started blowing their double-reed rhaita pipes in unison.

Licata and Rudolph watered a forest of interlocked groove, with Kaiser and Bernstein stippling spiky phrases. Laswell laid down a shagging pile of diced liver, its dark juices seeping into the quivering walls of The Stone. He'd brought along his usual weighty rig, so produced quite possibly the most extreme bass presence that this tiny venue has ever experienced. Particularly as the front seat-rows were virtually on top of the speaker cabinet. Dr. Israel toasted over this magnetic morass, feeding in some beats and effects trimmings, mostly with pleasing results, although he could occasionally have paused and bided his time, leaving more room for trumpet and guitar. The ritual vibrations were exciting in the extreme, but mostly depended on the locking between the percussionists, Laswell himself and the Moroccans. Somehow, it was tougher for Bernstein and Kaiser to find space, but apparently the emphasis had been different during the earlier set. Most of this second set maintained its shamanic intensity, providing that startling feeling produced when a crucial point is pronounced, the essence latched onto, the players riding out with the almost uncontrollable process that they've collectively created.