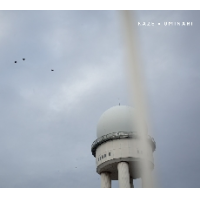 Uminari is the third release, following Rafaele and Tornado, from the cooperative quartet Kaze, made up of pianist Satoko Fujii, the dual trumpets of Christian Pruvost and Natsuki Tamura and drummer Peter Orins. While the quartet's configuration is unusual, it is also different from Fujii's viewpoint in that she is not the leader, but rather one of four equal participants, allowing her to relax a bit more than usual.

The first thing that must be said is that this music requires a long attention span in that it often takes its time developing organically, rather than thematically. There are many sections made up of sounds (particularly Tamura) rather than notes and also sharp contrasts in dynamics. Orins must be singled out as a master at producing harmonics from his cymbals.

Of the five compositions presented, two ("Running Around" and the title track "Uminari") are by Fujii, and one each from Pruvost ("Tioky Astimo"), Tamura ("Inspiration") and Orins ("Vents Contraires"), with the shortest being just under ten minutes and the longest over twenty minutes. Each piece is a unique adventure and quite literally one is taken for a ride by each.

The albums's title, "Uminari" is one of those words created by a society to encapsulate some kind of unique feature on its environment -here Japan and the life-giving, but ever dangerous sea. Its meaning is of a deep, low sound coming from the sea that signals a coming storm or tsunami; the sea issues a warning for those who can hear it, before its destructive power is unleashed. The corresponding track has the most literal sound painting, here a most terrifying recreation of the calm before the danger, followed by nature's attack.

"Uminari" epitomizes the highly emotional and intense qualities of this music. While each piece has its own pacing, emotional space, musical language and internal logic, they do feel related as being made by this collective group of players.

This is music which is meant to be experienced rather than merely listened to, with time and space being changed for its duration, if not after.