By ROGER FARBEY
December 24, 2016
Sign in to view read count 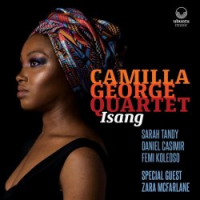 Isang is the long overdue debut album for alto saxophonist Camilla George, a graduate of London's renowned Trinity College of Music. George has worked with several leading bands including Tomorrow's Warriors, Nu Civilisation Orchestra and Jazz Jamaica. She's led her own quartet since 2014 and her love of African and Western music is influenced by her country of birth, Nigeria. The album's title Isang (pronounced E-S-A-N-G) is an old Efik/Ibibio word that means voyage and symbolises George's own musical journey.

The album kicks off with the vibrantly modal, Coltrane-esque "Mami Wata" and evident from the start is George's characteristic pure alto tone, close to a clarinet in timbre. Equally enthralling is Sarah Tandy on stretchy McCoy Tyner-like chords. Whether Daniel Casimir and Femi Koleoso may be the next Jimmy Garrison and Elvin Jones is debatable, but they are very effective sidemen and produce exactly the right, tight sound for this group. "Lunacity" is a bouncy calypso with George cannily inserting some apt quotes such as "Don't Stop The Carnival" and "Salt Peanuts."

The affecting slow blues of "Song For Reds" is followed by the title track, another calypso-influenced tune to which George's soloing spars with the subtly laid-back rhythm section. Zara McFarlane contributes alluring scat vocals to Kenny Garrett's "Ms Baja," one of only two tracks on the album not composed by George. "Dreams Of Eket" and the standard "The Night Has A Thousand Eyes" are both seductively relaxed ballads but by sharp contrast "Mami Wata Returns / Usoro" opens with an ostinato bass line and a punchy percussive rhythm all contributing to an infectious groove.