By DON PHIPPS
December 2, 2019
Sign in to view read count 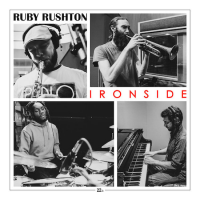 Ruby Rushton's Ironside is like a trip back to the jazz of Dave Grusin's late 1980s film soundtrack The Fabulous Baker Boys. Hard driving bop, the music bubbles along with syncopated riffs and upbeat, energetic shuffles interlaced with soulful intervals.

Woodwind player Edward Cawthorne penned six of the tunes, keyboardist Aidan Shepherd penned two more, and the two collaborated on "Triceratops / The Caller." The group also covers Krzysztof Komeda's ballad "Pingwin (Requiem For Komeda)." Most of these compositions have an urban vibe—gleaming skyscrapers, zippy highways, or a jaunty walk down a bustling sidewalk.

Shepherd's work has a modal and bluesy quality, reminiscent at times of McCoy Tyner, Herbie Hancock and Joe Zawinul. And, interestingly enough, he adds a little Paul Bley in the opening number "One Mo' Dram." One would be remiss not to mention that, without a bassist, Shepherd fills in with some excellent bass synth work (check out "Ironside").

Cawthorne offers up scorching and soaring soprano sax lines (think John Coltrane) over the rolling and funky rhythms. Take his work on "Where Are You Now" and "Laura's Theme," work that flows effortlessly through changes and often peaks with earnest squeals of ecstasy. When he switches to flute, he sounds a lot like Hubert Laws. His flute solos on "Ironside" and "The Target" suggest weaving through traffic congestion like a knife through butter. He exhibits a softer approach on "Return of the Hero," like a bird playfully surfing the wind. And there's even a little Paul Horn quality to his spiritual solo on "Prayer for Grenfell."

Trumpeter Walters shows his chops on "Where Are You Now" and he alternates between gliding and emphatic solos (for example, his efforts on "Return of the Hero" and "Triceratops / The Caller") and those that feature light skipping accents ("Lara's Theme"). His muted playing on "Pingwin (Requiem for Komeda)" is certainly a highlight.

One would think that with all of this action, it would suffice for Carnegie to just keep the rhythm. Nothing could be further from the truth. His all-over and controlled drumming combines great cymbal work, rim shots and snare rolls to lift the music onto a bouncy foundation.

For those who enjoy music with a nice backbeat delivered in a head nodding, foot tapping, body shuffling manner, Ruby Rushton's Ironside delivers. Enjoy the drive.

One Mo' Dram; Where Are You Now?; The Target; Return of the Hero; Eleven Grapes; Lara's Theme; Prayer for Grenfell; Ironside; Triceratops / The Caller; Pingwin (Requiem for Komeda).